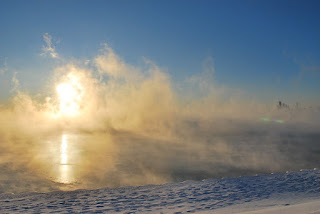 While I am on the one hand very much a creature of moderation—regular schedule, regular life—at the same time, I am not someone who does things by half measures. I commit to the things I choose as undertakings. It's no accident that I've been working at the same place for nearly twenty-one years now, lived in Chicago longer than that, been married nearly that long.

Which is why I want to say up front: I may be back. I gave up blogging a few years ago around the same time the bulk of the Internet's attention turned away from it to the faster-paced, more ephemeral arms of social media. My reasons were more prosaic: I had taken up the piano in moderate seriousness, and that, combined with the time needed for a new dog and a slightly longer commute to a then-new home, ate up the time I had previously devoted to blogging. For a good long while, I didn't really miss it. I had the interactions with other book people that I wanted via Twitter. I got more diligent about landing writing assignments for other venues. Lately, however, I find myself missing it. The voice is different from other writing. The way of approaching and thinking about the books I read is different. The interaction with other readers is different.

So here I am. My aim, for now, is to post most weeks, most often (taking a page from Phil Christman's newsletter) on Sunday mornings. But it's possible that I will find myself failing to make the time even for that. It's possible I won't find the voice again. I'll assess around the end of the year. For now, however, I'm going to try.

I'll start modestly. Yesterday was essentially the first truly sunny day in Chicago this year, and, oh, did we feel it. It made the month-opening entry for February in The Daily Henry James, from The Princess Casamassima, seem well timed:


The winter was not over, but the spring had begun, and the smoky London air allowed the baffled citizens, by way of a change, to see through it. The town could refresh its recollections of the sky, and the sky could ascertain the geographical position of the town. The essential dimness of the low perspectives had by no means disappeared, but it had loosened its folds; it lingered as a blur of mist, interwoven with pretty suntints and faint transparencies. There was warmth an there was light, and a view of the shutters of shops, and the church bells were ringing.

Here in Chicago, the winter is much farther from over than it is for a Londoner. But yesterday felt like the first real step towards its banishment.

Thanks for reading. See y'all around these parts for a while, let's hope.
Posted by Levi Stahl at 1:10 PM