"Being born is craps. How we live is poker." 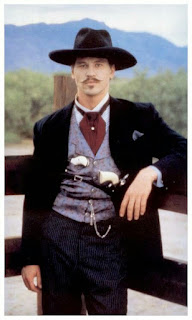 About two years ago, I realized that Netflix had reached that point. There was plenty to watch, but . . . not that, and not that, and not anything from that era, and not that other thing. I was saved, however, by the discovery of the University of Chicago Library's DVD collection. That, and the acquisition of a Chromecast, which opened up a world of streaming and rental options, dropped me unexpectedly into a world where I could see, if still not quite everything, at least far, far more movies I actually wanted to see than I would likely watch in a lifetime.

So I've been watching a lot of westerns. Film critic David Bordwell wrote a post recently that, while also addressing many other issues, helps explain why: If you can watch anything, how do you choose? My solution was to spend 2019 watching only movies from the '70s. And, to leaven those—that much time with '70s interiors can't be good for you—westerns.

This year, I've let the '70s go for a bit. But the westerns have stayed. What's drawing me to them? Personal history, in part. I've enjoyed westerns since I was a boy. I grew up listening to old Lone Ranger radio programs and watching the Disney Davy Crockett TV series on VHS. It's more than that, though. It's the landscapes, which I didn't even notice when I was a kid. The horses, presented matter-of-factly as just another tool, yet regularly surprising you with their beauty and magnificence. The music, full of motifs that still stir the blood.

Then there are the themes. I'm far from a manly man. I have no interest in proving my toughness. Fights should probably be backed down from most of the time, to be honest; there are usually other ways to achieve your aim. I'm not restless, have no need to strike out into the unknown. I'm solitary but I don't need full solitude.

Honor, though? That works. The idea that you owe it to yourself and those around you to live truthfully and honor your commitments, that you should say what you mean and do what you say. That's at the core of most westerns, and it gives the best of them the same grounding that you find in the best of Joseph Conrad: a reason to tell this story, to care about these people.

As with Conrad, there's plenty of bad in westerns, too. Even if you try to stay away from movies that are explicitly about taking land from Native Americans, you still every once in a while come up against a scene where their lives are implicitly regarded as less valuable than those of others. And if we're being honest, we have to acknowledge that even movies that are about conflicts among white settlers are also about the displacement of native peoples. I'd understand if that put you off westerns entirely. For me, it's one more bit in the balance, another refraction of the story they're telling—and of the story America was telling about itself as the twentieth century wore on.

But this is a book blog, right? Here's where we get to that. A subset of the westerns I've been watching lately has been movies about the gunfight at the O.K. Corral. An extremely brief shootout that occurred "around 3:00 PM" on October 26, 1881 in Tombstone, Arizona, it has been the subject of untold works of fiction and nonfiction, books and films. Each one takes a slightly different angle on what is at base a story of the Earp brothers—capable, yet prone to failures and trouble, family men who again and again wound up in violence—and their friend Doc Holliday, who has come down to us as a gunman who dreamed of better things.

Some of the films, including My Darling Clementine (1946) and Gunfight at the OK Corral (1957), present the gunfight as a dramatic triumph, the moment when heroes win and the West moves one step closer to being "civilized." Other films, including the two that were released almost simultaneously in the early 1990s, Tombstone and Wyatt Earp, treat it as at best a source of regret, the moment that the Earp's luck starts to run out. Those films aren't necessarily better—some days I'd take My Darling Clementine, with Victor Mature playing a truly menacing Doc Holliday, over them all—but they do feel more true to life.

The place I've seen the gunfight presented most clearly as tragedy, however, is in Mary Doria Russell's Epitaph: A Novel of the O.K. Corral (2015). It's a sequel of sorts to her 2011 novel Doc, which paints a powerfully sympathetic portrait of Doc Holliday. Here's the opening of that book:


He began to die when he was twenty-one, but tuberculosis is slow and sly and subtle. The disease took fifteen years to hollow out his lungs so completely they could no longer keep him alive. In all that time, he was allowed a single season of something like happiness.

That was enough to hook me. A century and a half after his death, Holliday is more myth than man, and Russell doesn't shy away from that. The book is as much a romance as anything else, with Doc the person we're falling in love with. (Russell herself noted on Twitter: "John Henry Holliday didn't have a mama to love him when he was grown so I have taken him for my own. Loved that boy.") At the same time, however, we buy him, this gunfighter who is quick to kill but also somehow conveys "a special sort of gentleness that you see sometimes in people who've been hurt bad but who don't want revenge." Living under a death sentence from young adulthood, raised and educated for a life wholly different from the one he found ("A youth in the South. An education in the North. Bred for life in the East. Trying not to die in the West."), Russell's Doc is compelling and charismatic, but also alcoholic and self-destructive. "In a stand-up contest," she writes, "remorse and self-loathing can battle whiskey to a draw."

The book is full of memorable lines like that:


He meant no harm, of course. Helpful people never do.

What could Penelope offer Odysseus but illness and death if he returned to Ithaca?

A conviction of his own disgrace had taken hold of him. He had begun to live down to his opinion of himself.

Hope—cruelest of the evils that escaped Pandora's box.

Everything but sloth, he realized. Dodge City was diligent in sin.

Bein' born is craps. How we live is poker.
Epitaph greatly expands the story, bringing each of the Earps—brothers and spouses both—to life, but that portrait of Holliday that we carry from the earlier book is just as important to its power. We watch the Earps and Holliday trying and failing to make stable lives, often undermining their own efforts. In Tombstone we see them come closer than ever before to making it work. And then we reach this line, which, after all the foregoing, reads like the fates taking a tragic hand:


There are five armed men in the O.K. Corral.

When I read Epitaph, I literally put the book down at that point and took a walk. I needed more time before letting this happen to these people I'd grown to care about.
The gunfight itself takes up only a few pages, as you can see in this photo. 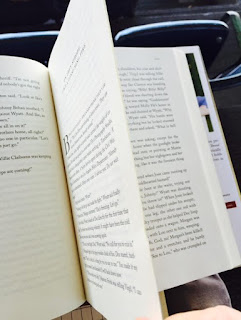 But from it will spin out death and despair, the end of their brief spell of peace and happiness in Tombstone.

I wrote above that the core of what draws me to westerns is how they handle honor. The O.K. Corral story isn't really about honor so much as it's about mistakes and human failings. The Earps could have walked away from that fight, Holliday even more so. The honor here comes instead in the telling, in taking these people and lives from our past seriously and helping us understand, if not exactly how it happened, then at least how it might have happened, and why we should still care.