Woolf and Lamb, their time and ours, the artist and the art 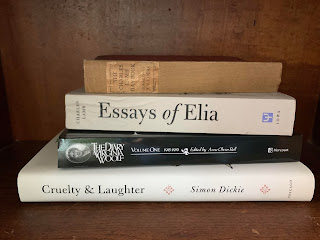 In the early days of January, I set aside a few books to be regular companions through the year: a volume each of Virginia Woolf's diaries, essays, and letters, and The Charles Lamb Day Book, a quote-a-day volume drawn from the full range of Charles Lamb's work.

One day recently, reading both of those companion authors, I was brought up short—and not in a good way. I'm going to quote both below, in service of thinking about them, so if you'd rather the pleasantness of your Sunday morning not be broken, I'd suggest passing over this post.

In the Lamb entry for January 24, taken from a letter to Edward Moxom, appears the line,


I maintain it, the eighth commandment hath a secret special reservation by which the reptile is exempt from any protection from it; as a dog, or a n------, he is not a holder of property.

Neither Lamb nor Methuen, the publisher of this 1925 volume, elided the slur as I have done.

Then, in Woolf's diary entry for January 9, 1915, when she was almost thirty-three, I came across the following:


On the towpath we met & had to pass a long line of imbeciles. The first was a very tall young man, just queer enough to look twice at, but no more; the second shuffled, & looked aside; & then one realised that every one in that long line was a miserable ineffective shuffling idiotic creature, with no forehead, or no chin, & an imbecile grin, or a wild suspicious stare. It was perfectly horrible. They should certainly be killed.

The whole of this passage is disturbing and disheartening, but that last line is flat-out shocking. "Certainly," she writes. "Certainly."

What to do with this? I love Lamb and Woolf, as writers and, in many ways, as people. Like Henry James, they are writers whose work I have trouble separating from my knowledge of and interest in their lives. Their published works nestle in my mind alongside their letters, notebooks, diaries; biographies inflect, and, largely, increase my appreciation of their creations. I admire Woolf and Lamb, both for the work they created and for the way they played the hands life dealt them: Woolf's valiant struggle against mental breakdown; Lamb's abiding care for his mentally ill sister ("When she is not violent, her rambling chat is better to me than the sense and sanity of this world."), even after she murdered their parents. I would find it hard to know as much as we now do about these two, to have read as extensively in their work as I have, and not admire them. I could no more read their work now as something separate from their lives and characters than I could a letter from one of my siblings.

Which is not to say that I've ever been under the illusion that either is perfect. Woolf could be tone-deaf and ignorant to the point of cruelty on issues of class, and, despite her marriage to a Jew, made antisemitic comments in her writings. Lamb, meanwhile, laid bare his prejudices against a number of groups that differed from him—blacks, Jews, Quakers, Scots—in his essay "Imperfect Sympathies." Of Jews, he writes,


I should prefer not to be in habits of familiar intercourse with any of that nation. . . . Old prejudices cling about me.


Some people would credit Lamb for being frank about these views, but like many people today who pride themselves on "just asking the question" about supposedly taboo subjects, he shows an interest only in acknowledging those views, not in understanding their roots, questioning their validity, or moving beyond them.

That image of the contemporary "question raiser" is perhaps a good path to the question of why, if I already knew that Woolf and Lamb were flawed, these passages stopped me in my tracks. It's at least in part because of the way that #MeToo and other developments have brought the question of how we deal with art by bad people to the fore. And unlike so many ginned-up controversies, this one is both real and legitimately complicated. There are plenty of people who are interested in using the question solely as a straw man in service of dismissing the larger project of widening the circle of inclusion in society, but there are also plenty of people legitimately trying to answer the question. It's possible to conceive of a  wide range of answers that are valid, with the test of that validity ultimately being up to each person as they address each work of art. (For a really good discussion of this subject, I recommend the "What to Do with What's in the Box" episode of the Relentless Picnic podcast.)

Is it unfair to judge people like Woolf and Lamb by the standards of our era rather than theirs? Certainly. The past was terrible. I've never forgotten the opening lines of Simon Dickie's 2011 book Cruelty and Laughter:


Eighteenth-century Britons—or a high proportion of them—openly delighted in the miseries of others. Women as well as men laughed at cripples and hunchbacks. They tormented lunatics and led blind men into walls. Wife beating was a routine way of maintaining order within marriage—"an honest Englishman hates his wife" went the catchphrase. Types of violence that would now count as rape were almost mainstream sexual behaviors. Social hierarchies were part of God's plan, and those less favored were habitual figures of fun. Gentlement beat their servants and scoffed at the hungry peasants who crouched along the road outside very major town.  Yet social equals were no more likely to sympathize. Useless old women, village idiots, starving paupers, bastard bearers from the next parish—none of them attracted much sympathy from their own kind. Ridiculing and inflicting pain were everyday amusements, and powerful forces were defending them. Violence, intolerance, and schadenfreude were all tolerated as unavoidable side effects of British liberty, if not its very foundation.

Our own time features plenty of cruelty. Dickie, however, makes a strong case that on this measurement, at least, we've made some progress. (Similarly, I was shocked reading a scene in Little Dorrit last month in which Gowan, not a good man but far from a villain, reprimands his dog with. a blow to the head, then by striking him "severely with the heel of his boot, so that his mouth was presently bloody.")

By those standards, the casual racism I encountered in Charles Lamb's Day Book is nothing but a phrase—tossed off in a letter, barely the product of thought, far more an indication of the waters in which he swam than a personal deficiency. And even the staggering cruelty of Woolf's certainty in her diary is of its era—perhaps more bluntly expressed, but in keeping with a time when eugenics was on the march. Would we want to be judged in the future by the ways in which we reflect our own flawed society? Would we wish posterity to extend to us the forbearance of temporal understanding? We are inextricably of our time, even if we should, and, one hopes, do, try like hell to rise above it. (D. J. Enright: "It is not so much that one is out of sympathy with the age, it's the only age one has, as that the age is out of sympathy with itself. But then, the age is out of sympathy with itself.")

Yet the very reason we turn to artists in life is that we expect more. Not more in an explicitly moral sense, but more in the sense of seeing clearly—but the two are inextricable. As Iris Murdoch continually reminds us, seeing clearly is at the core of both morality and art. Is it strange that Woolf, wrapped up in the thinking of her time—and herself such a creature of the mind that she would struggle to conceive living with it damaged in a way that possibly limited thought—should fail to see the essential humanity of intellectally disabled people? No, not at all. But some people in her own time did. And we have come to expect more from her. She showed us, again and again, a mind of penetrating insight into human life and thought and being; she put that on the page like few others, in ways that remain thrilling a century later. Even her casual writing flashes with insight—the reason I was reading her journals in the first place was because they are full of memorable thoughts. So when she falls, it hurts.

What do we do with this kind of knowledge about artists? I don't have a prescription; this work of judgment is I believe fundamentally individual. When it comes to someone like Bill Cosby or Louis C.K., or in a different way Woody Allen, the answer is easy: I'm done. To enjoy their work required accepting a certain presentation of themselves and their worldview that was predicated on agreement that they were, while flawed, fundamentally good people. If they turn out to be, to varying degrees, monsters, that collapses completely.

Woolf and Lamb, on the other hand? It's more complicated. I'm not going to stop reading them, and I doubt I'll even stop admiring them, at least to a degree. There remains much to admire. And their work will, I am sure, continue to matter. But I will approach it with more skepticism. I'll question it more thoroughly. And, saddest of all, I'll wonder what might have been, had they been able to question themselves and their thinking more thoroughly. Art made by good people can be bad; art made by bad people can be good. But bad morality is usually rooted in a failure of understanding, and no art is ever the better for that.
Posted by Levi Stahl at 10:49 AM