"A very poor creeper upon the earth," or, Johnsonian gleanings for a snowy night 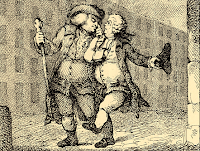 Tonight, after waiting an inordinately long time for the bus as the snow piled high and I slowly lost sensation in my feet, I opened Peter Martin's Samuel Johnson: A Biography (2008), to find that Johnson, as he so often does, afforded me a bit of consolation. I, after all, required only a few minutes of warmth to banish the pain from my feet; Johnson, on the other hand, had to endure protracted bouts with gout. Quotes Martin:

"I enjoy all the dignity of lameness. . . . I am a very poor creeper upon the earth, catching at anything with my hands to spare my feet." "It is of my own acquisition, as neither my father had it or my mother."

The thought led me back to a passage in Boswell's Life, in which, to support his contention that Johnson was the author of a couple of lines of anonymous doggerel, he asks,

But why, oh why would a poet want to put himself through that?

Other gleanings from tonight's reading of Martin's splendidly quote-filled biography:

1 In his final years, Johnson lived in a house at 8 Bolt Court, to which he welcomed a remarkable mix of friends and charity cases as free boarders. According to Martin, by 1777, they numbered seven, though I can only put names to six: Francis Barber, Johnson's manservant; Anna Williams, a blind poet who had lived with Johnson for years; Dr. Robert Levet, described by Hester Thrale as a "superannuated surgeon," and by Johnson as "a brutal fellow, but I have a good regard for him for his brutality is in his manners, not his mind"; Poll Carmichael, a Scotswoman who may have been a reformed prostitute; and an old friend of Johnson's late wife, Mrs. Desmoulins, who moved in along with her daughter in 1777. As Martin puts it,

She completed the recipe for domestic chaos in the house, for she and Mrs Williams despised each other and the normal bickering in the house increased exponentially. Mrs Thrale was both amused and horrified that Johnson's house was "overrun with all sort of strange creatures, whom he admits for mere charity," "but as they can both be occasionally of service to each other, and as neither of them have any other place to go to, their animosity does not force them to separate." None of the inhabitants, in fact, liked Mrs Desmoulins. "Mr Levet who thinks his ancient rights invaded, stands at bay, fierce as ten furies," Johnson grumbled to Mrs Thrale; "Mrs Williams growls and scolds, but Poll does not much flinch." After a year with all of them, Johnson summed up the turmoil in the house: "We have tolerable concord at home, but no love. Williams hates everybody. Levet hates Desmoulins and does not love Williams. Desmoulins hates them both. Poll loves none of them."

It sounds like either a logic puzzle or a 1930s screenplay, some sort of cross between Ball of Fire and You Can't Take It With You; I will admit to enjoying the image of Johnson as the grumbly patriarch on a sitcom, perhaps played by Jeffrey Jones.

2 Descriptions of Johnson's unusual physical presence are common, many of them highlighting the tics that most people now agree were most likely symptoms of a neurological disorder. Two that are quoted in the final portion of Martin's book seem worth sharing, however, for their language alone. First, from the Reverend Thomas Campbell, an Irish clergyman who, on meeting Johnson, was unimpressed:

[He] has the aspect of an idiot, without the faintest ray of sense gleaming from any one feature--with the most awkward garb, and unpowdered grey wig, on one side only of his head--he is forever dancing the devil's jig, and sometimes he makes the most drivelling effort to whistle some thought in his absent paroxysms. . . . [He] flew in a passion rather too much.

Then there's this description from the more appreciative Fanny Burney, who is known to us now as the author of Evelina:

He is, indeed, very ill-favoured; is tall and stout, and stoops terribly; he is almost bent double. His mouth is almost continually opening and shutting, as if he was chewing. He has a strange method of frequently twirling his fingers, and twisting his hands. His body is in continual agitation, see-sawing up and down; his feet are never a moment quiet; and, in short, his whole person is in perpetual motion.

Martin writes that Burney's journals, "full and rich with the novelist's wit and vibrantly recorded scenes," deserve to be ranked with those of Pepys and Boswell. That's high praise; anyone out there willing to second it, and thus launch me on a library trip?

3 Johnson, as is well known, was at best opinionated, at worst downright difficult to get along with. The following exchange with his close friend Mrs. Thrale succinctly sums up Johnson's problem keeping his manners:

As he confessed to Mrs Thrale, "I am always sorry when I make bitter speeches & I never do it, but when I am insufferably vexed." "But you do suffer things to vex you, that nobody else would vex at."

James Boswell was often the source of that vexation. Though the more one reads about Johnson, the more on realizes that he really did feel warm friendship for Boswell, at the same time, his exasperation at Boswell's transparent attempts to draw him out on various topics regularly bubbled over. I can't resist closing with two of his complaints about his importunate friend that, though oft-quoted, still bring joy. First, to Boswell himself:

You have but two topics, yourself and me, and I'm sick of both.

Then, about Boswell to another friend:

Boswell's conversation consists entirely in asking questions, and it is extremely offensive.

Why is it that every time I see those lines I smile, loving both men more?
Posted by Levi Stahl at 8:12 PM