"Coleridge was to prove a dangerous companion for the high-strung." 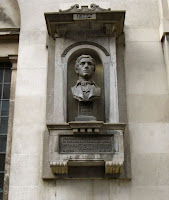 Though I pick up literary biographies because I'm interested in their subject, as I read them I often find myself more drawn to the glimpse they afford of the other writers in the subject's orbit--his friends, enemies, and/or collaborators, who together make up the literary life and conversation of an era. When that era is late Georgian and Regency England, the pleasures afforded by the peripheral figures are almost unparalleled: having set to reading about Byron, Shelley, Wordsworth, or Coleridge, we find ourselves learning along the way about such writers as Leigh Hunt, Robert Southey, and William Hazlitt, all interesting in their own right.

In Adam Sisman's book on Wordsworth and Coleridge, the most striking peripheral figure--aside perhaps from Dorothy Wordsworth, who is nearly a primary subject in her own right--is unquestionably Charles Lamb. These days, Lamb is little known compared to the era's stars--I surprised a guide on a walking tour of London a few years ago by being familiar with him when we stopped at his memorial on Gilspur Street. He's best remembered for the Tales from Shakespeare (1807) that he wrote with his sister Mary, which served as my first encounter with Shakespeare many years ago; if he's known beyond that, it's for the tragic circumstances of his life, which saw him having to care for Mary after she stabbed their mother to death and attacked their father in a psychotic fit.

But Lamb's other work--primarily essays--does have its fans, including Peter Ackroyd (who wrote a novel about Charles and Mary a couple of years ago) and Patrick Kurp of Anecdotal Evidence, who for the past couple of years has been urging people to seek out Lamb, describing his essays as

seriously charming or charmingly serious, and written in some of the most freely associative prose you’ll ever enjoy.

Elsewhere, Kurp has written that Lamb,

like Sterne on most occasions, perfected a carefully calibrated tone of inspired silliness. He was a master of “almost.” His prose is almost self-indulgent, almost incoherent, but his internal gyroscope usually kept it in balance. Nothing requires more control than appearing out of control, with perfect grace, though Lamb mastered other voices.

That jibes with the impression one gets from Sisman's account, which quotes freely from Lamb's letters to Coleridge, whom he once described as

the only correspondent and I might add the only friend I have in the world. . . . I have never met with any one, who could or can compensate me for the loss of your society--I have no one to talk all these matters about to.

Lamb even unexpectedly calls to mind the genial strangeness of Robert Walser when he describes a period that he spent "very agreeably" in an asylum following a breakdown, after which, Sisman notes, he explained to Coleridge that, though he had "got somewhat rational now, and don't bite any one," he remembered those six weeks

with a gloomy kind of Envy. For while it lasted I had many many hours of pure happiness. Dream not Coleridge, of having tasted all the grandeur and wildness of Fancy, till you have gone mad. All now seems to me vapid; comparatively so.

In those letters to Coleridge, he also demonstrates another facet of his talent that Patrick has noted, a facility as a critic, giving Coleridge the needed advice to

Cultivate simplicity . . . or rather, I should say, banish elaborateness; for simplicity springs spontaneous from the heart.

Patrick's testimony--and carefully chosen quotations--had already convinced me that Lamb was worth seeking out, but, as with so many worthy pursuits in life, that intention had fallen by the wayside; Sisman's account has reminded me to act on it, and I expect I'll have lines from Lamb to share in the coming months.

"A dedicated reader of Lamb," Patrick writes, "grows to love him as a friend." The list of writers about whom even a devoted reader can feel that way is short, cherished, and very personal, but I trust Patrick's opinion enough to harbor hopes that Lamb will be of its number by year's end.
Posted by Levi Stahl at 9:58 PM