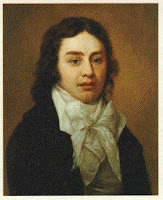 I've mentioned before that I love footnotes? And dreams? Then let's just dive into a post about a wonderful footnote from Adam Sisman's The Friendship: Wordsworth and Coleridge.

The footnoted scene occurs in 1796, when the young Coleridge was touring the countryside to drum up subscriptions for a new political and literary periodical, of which he was to be the editor (to the surprise and dismay of his friends, who doubted his reliability: "Of all men, Mr Coleridge was the least qualified to display periodical industry," laments his friend and publisher Joseph Cottle (which makes me picture Coleridge as one of those bloggers who gives up after half a dozen posts)). Having been invited to the house of a dissenting minister for an evening of friendly conversation, he made the mistake of smoking some opium beforehand,

which left him feeling so ill that on arriving at the minister's house pale and sweating profusely, he sank back on the sofa in a sort of swoon. At length "he awoke from insensibility" and looked around the room, blinking in the light of the candles that had been lit in the interim. One of the gentlemen present asked him if he had read a newspaper that day. "Sir," he replied, rubbing his eyes, "I am far from convinced that a Christian is permitted to read either newspapers or any other works of merely political and temporary interest." The ludicrous incongruity of this remark produced a general burst of laughter, and during the remainder of the evening those present joined in attempting to convince Coleridge "in the most friendly and yet most flattering expressions that the employment was neither fit for me, nor I fit for the employment."

To this scene, entertaining enough in itself, Sisman appends the following:

Hazlitt (who of course was not present) gives another account of what seems to have been the same occasion, in which Coleridge awoke on a sofa and then "launched into a three hours' description of the third heaven, of which he had had a dream."

Now, though I am one of those people who unquestionably takes pleasure in recounting his dreams, I do think I would have the good sense to stop well before I'd entered the third hour--though I suppose my friends are welcome to set me straight in the comments, if they see fit.

But, then again, I suppose I've never dreamed Kubla Khan, either, have I? Three hours of confusion and banality here and there in exchange for such a poem isn't that much to ask, no?
Posted by Levi Stahl at 1:20 AM