Someone's got to do it: On Saint Sebastian and Aubrey Beardsley, with just a bit (of course) of Anthony Powell

We open today's post with the entry on Saint Sebastian from Foxe's Book of Martyrs:


Sebastian being born in that part of France called Gallia Narbonensis, was a Christian, and was lieutenant general of the vaward of Dioclesian the emperor; who also encouraged many martyrs of Christ by his exhortations unto constancy, and kept them in the faith. He being therefore accused to the emperor, was commanded to be apprehended, and that he should be brought into the open field, where by his own soldiers he was thrust thro' the body with innumerable arrows.

Martyrological legend has it that Sebastian survived the arrows and was given a chance to harangue Diocletian in person, only to then be clubbed to death. In the world of art, however, that death has almost no place, while Sebastian, looking calm, pious, even beautiful under a hail of arrows has been a common subject for centuries now, familiar from any number of works and artists.

I was not, however, familiar with this engraving of the scene by printmaker Jacques Callot. 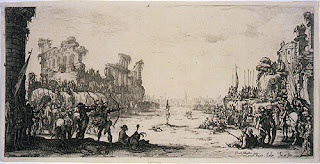 What I like about this is the spaciousness of it: Callot chose to depict not merely the moment of death but the organized process of bringing it. This is an execution more than a martyrdom, Sebastian a small figure at its center

I doubt I'd ever have seen this engraving--being not a believer, I don't spend a lot of time on saints--had I not been flipping through a volume of Aubrey Beardsley's letters and found this reference to it in a letter to his friend Andre Raffalovich, a Catholic, of May 5, 1897:


I suppose Gray knows of Callot's singularly interesting eau-forte of the Martyrdom of St Sebastian. There is a charming soldier in the background picking up the arrows that have missed the Saint. 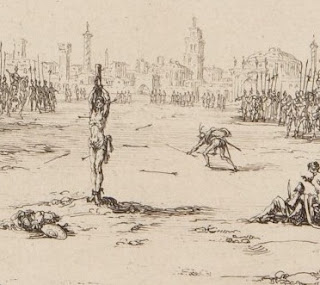 Had you noticed the soldier? I can't say I would have without Beardsley as my guide. I'm not sure I would describe him as charming. That feels like Aubrey being deliberately casual, decadently arch. There is, nonetheless an unusual quality to him. Does his awkward step signal caution? (Are there more arrows coming?) Delicacy? Even goofiness? Looking at his almost mincing manner, you can imagine him as a character from a Monty Python sketch, trying simply to do his job and finding himself utterly beset.

My first thought on encountering Beardsley's letter, and being led to the image itself, was that Anthony Powell would have loved this detail. I quickly turned to a pair of Powell's reviews of volumes of Beardsley's letters from the 1970s in hopes of finding a comment, but alas: it goes unremarked. Nonetheless, the whole of it seems to his taste: the discovery and highlighting of an inessential background figure; the realization that the artist put him there deliberately, and seems to have even perhaps taken some pleasure in doing so; and the acknowledgment he signifies that even the most dramatic moments of life retain their humdrum characteristics--there is always someone around just doing their job. I realize that an alternative response to this scene would be one of horror: a man is cooly going about his job as another is being murdered. But the bloodless quality of centuries-old tales of martyrdom, and my sense of Powell's own sensibility, suggests he'd take it lightly. As he once wrote of Beardsley, without obvious judgment, "He was without sentimentality.

A line from Powell's notebooks came to mind: "They are casting lots for my raiment at this moment." The gallows humor is kin to that arrow-gathering soldier, no? I also thought of a more sentimental way of reading a not-dissimilar scene, this one from Roger Ebert's 1983 review of Return of the Jedi, praising George Lucas's inclusion of small details:


Here is just one small moment in "Return of Jedi," a moment you could miss if you looked away from the screen, but a moment that helps explain the special magic of the Star Wars movies. Luke Skywalker is engaged in a ferocious battle in the dungeons beneath the throne room of the loathsome, Jabba the Hutt. His adversary is a slimy, gruesome, reptilian monster made of warts and teeth. Things are looking bad when suddenly the monster is crushed beneath a falling door. And then (here is the small moment) there's a shot of the monster's keeper, a muscle-bound jailer, who rushes forward in tears. He is brokenhearted at the destruction of his pet. Everybody loves somebody.

All drama has a center, which means it has a periphery, and on that periphery are a lot of people simply trying to get through their day. That Callot paused to think, "Not all those arrows are going to hit," then followed that thought out and had fun with it, makes me happy.

Beardsley, meanwhile, can be forgiven a bit of gallows humor, even a shade of deliberate affectless decadence: read more than a handful of his letters and you'll begin to realize how awful tuberculosis must have been. Letter after letter is little more than a patient, mostly uncomplaining recital of symptoms and hoped-for routes to respite. His death didn't have the drama of a martyrdom, but he was able to see it coming for a long time.
Posted by Levi Stahl at 2:46 PM