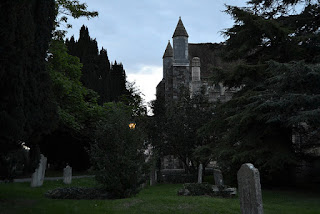 I'm a bit late this year welcoming October, but rest assured: that eerie silence you've heard is the sound of me reading weird tales in honor of the month.

To break the silence, then, how about two different approaches to bringing the reader into the realm of the strange--into the month of October, in a sense? Here's the first, which serves as a sort of preface to Ray Bradbury's October Country:


October Country . . . that country where it is always turning late in the year. That country where the hills are fog and the rivers are mist; where noons go quickly, dusks and twilights linger, and mid-nights stay. That country composed in the main of cellars, sub-cellars, coal-bins, closets, attics, and pantries faced away from the sun. That country whose people are autumn people, thinking only autumn thoughts. Whose people passing at night on the empty walks sound like rain. . . .

A list, incomplete but suggestive, of the touchstones of Bradbury's fiction. At his best, he generated mystery, chills, and wonder from the edges of the stuff of everyday life--and particularly those bits of it that were already showing their age, withering into disuse, in his own childhood, those interwar years where the modern world was tantalizingly imaginable, but the Depression kept pushing it ever further out of sight. It's a world where small towns were still isolated, their streets still dark; where leaves were burned at the edge of the yard, their smoke marking summer's pyre; where the idea that there might still be secret, unknown places down the cracked, root-tilted sidewalks of a little-used street didn't, in the darkness of a crisp October night, seem all that far-fetched.

At the other end is this, the opening to Clark Ashton Smith's "The Tale of Satampra Zeiros," which was published in Weird Tales in November of 1931, when Bradbury was eleven:


I, Satampra Zeiros of Uzuldaroum, shall write with my left hand, since I have no longer any other, the tale of everything that befell Tirouv Ompallios and myself in the shrine of the god Tsathoggua, which lies neglected by the worship of man in the jungle-taken suburbs of Commoriom, that long-deserted capital of the Hyperborean rulers. I shall write it with the violet juice of the suvana-palm, which turns to a blood-red rubric with the passage of years, on a strong vellum that is made from the skin of the mastodon, as a warning to all good thieves and adventurers who may hear some lying legend of the lost treasures of Commoriom and be tempted thereby.

You probably don't need me to point this out, but Smith was an acolyte of Lovecraft, and this story was praised by Lovecraft as "close to being your high spot in prose fiction to date." Interestingly, what Lovecraft identifies is not his own influence, but that of Lord Dunsany: "You have achieved in its fullest glamour the exact Dunsanian touch which I find almost impossible to duplicate."

It hasn't, however, held up as well as Bradbury's formulation. Oh, there are nice touches: the passing note about the lost hand, the mammoth vellum, the "lying legend."But it's hard to read the cascade of portentiousness and not start to wonder whether Smith isn't perhaps writing with tongue in cheek. When you realize that he's wholly serious, you have to thoroughly recalibrate as a reader. Fortunately, once you've done that, the brief story is fun and satisfying.

No big point to make about this pairing beyond that, aside from the reminder it gives that a fan of weird and ghostly tales has a panoply of styles and approaches to choose from. It's part of what makes October such a pleasure. If I read about gods like Tsathoggua all the time, I'd go insane (and not for the reasons Lovecraft and Smith might adduce), but here and there, interspersed with Robert Aickman and Arthur Machen and Edith Wharton and Kelly Link, it's great fun.
Posted by Levi Stahl at 5:50 PM