Highsmith takes aim at one of the evils of life

Donald Westlake and Gillian Flynn led me back to Patricia Highsmith this week. Westlake, unsurprisingly, did so through The Getaway Car. Sadly, there wasn't much in Westlake's files on Highsmith, which is too bad, since I would have loved to read an extended analysis of her everyday sociopaths in light of Parker's more focused pathology. But Westlake did discuss Highsmith at least once, in the context of the work he did on a film version of Ripley Under Ground, and I was able to include that. If you want a thumbnail version of it while you wait for the book itself to arrive in September, you can head over to Nick Jones's Existential Ennui, where he's recently posted about it.

Gillian Flynn, meanwhile, last week led a Wall Street Journal book club on the Highsmith novel that most influenced her, Deep Water (1957). And hoo, boy, now that I've read it I can see why: it's about a marriage made toxic by infidelity and acquiescence . . . and just a touch of sociopathy. As in the Ripley novels--or, to draw the circle more tightly, Burke Devore in Westlake's The Ax--the husband Highsmith creates is plausible and ordinary, yet capable of monstrous acts. It's that everydayness that frightens, and draws us in; only slowly do we realize that the disconnect between his mind and his emotions, his behavior and his analysis of that behavior, is fundamental, and deadly.

It's Friday night and I'm behind-hand a bit after a day spent dealing with dull yet time-consuming new (108-year-old) house problems, so I'll just hit a couple of more sociological points then leave you with a passage that amused me. First, the sociology: Highsmith's couple is ensconced in the upper middle class of 1950s suburban Connecticut, the land of Cheever and Updike (and, at one remove, John O'Hara). And, murder aside, there are aspects of that life that--no matter how much Cheever and Updike we read--remain jaw-dropping to an upper middle class twenty-first-century urbanite. To wit:


1 Oh, lord, how they drink. Don't get me wrong--I'm mid-martini right now myself--but that will be the evening's martini. For the 1950s suburban set, that would be mere pre-gaming. Actual social drunkenness, for me (and most of my cohort) is an occasional error, regretted; if Highsmith and her peers are to be believed, in that set it was common, bordering on constant. Combine that with a relative lack of entertainment options and a narrow range of acquaintance, and no wonder there was all that sleeping around . . .


pleasantly conscious of the fact that his front was absolutely straight now, that there was no bulge at all below his braided belt.

The braided belt we'll abhor, then leave. It's the "below" that I want to deal with. Look at this picture of Bogart (and, I think, IBRL favorite Sydney Greenstreet in the wheelchair?) if you need a reminder. 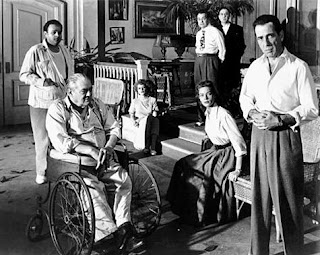 Good god, men at midcentury wore their pants too high. Even Bogart can't carry off that look.

And now, to carry you into the weekend, I'll share the one moment in the novel when Highsmith allows a character to acknowledge the presence of evil in the world:


The likelihood of typographical errors in spite of rigorous proofreading was going to be the subject of an essay that he would write one day, Vic thought. There was something demoniacal and insuperable about typographical errors, as if they were part of the natural evil that permeated man's existence, as if they had a life of their own and were determined to manifest themselves no matter what, as surely as weeds in the best-tended gardens.

In the current paperback edition of Deep Water, published by Norton, the next typographical error doesn't appear for more than ten pages.
Posted by Levi Stahl at 8:49 PM