Just in time for October reading, the good people at NYRB Classics have published a new translation of Jeremias Gotthelf's 1842 novel, The Black Spider, complete with horrifying Renaissance waxwork cover art. It's mostly a lurid Christian morality tale: peasants in a rural village in Switzerland, suffering under a ruthless lord, make a deal with the devil, with results that are predictable if pleasantly surprising in their execution. Unexpected, however, is the level of grotesque detail, and even gore: the way the black spider of the title sets about his dark work, you can imagine John Carpenter reading it and immediately getting his creature team on the phone.

What I'll remember longest, however, is Gotthelf's portrayal of the devil, who appears at the moment of the peasants' greatest despair at their lord's impossible demands for labor:

[A] tall, spindly huntsman, dressed in green from top to toe. Upon his jaunty cap swayed a red feather, a little red beard blazed in his swarthy face, and, nearly concealed between curving nose and pointy chin, like a cave under an overhang, a mouth opened and asked, "What is the matter, good people, that you sit here wailing so piteously as to drive the very stones from the earth and the branches from the trees?"

Then the green man's face grew even blacker, the red beard so red it seemed to crackle and spark like fir twigs on the fire, the mouth contracted to an arrow-like point.

The devil, I think, should be jaunty. And, as he does later in The Black Spider, he should show pity: he sees your plight, and he wants above all else to help you!

All of which calls to mind my favorite screen devil, from the 1941 adaptation of The Devil and Daniel Webster: Walter Huston's Ol' Scratch. 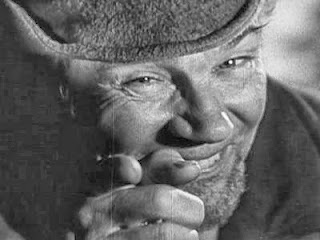 Who could refuse that face?
Posted by Levi Stahl at 12:43 PM