In honor of Independence Day

I may be a few days late, but love of country knoweth no season, abideth by no clock, is reck'd not by the sun nor the moon, surely?

So here, in honor of the 4th of July, which in my neighborhood didn't really end until at least 4 AM on the 5th--at least, that's when I remember hearing the last explosion--a brief passage from Adam Goodheart's wonderful look at the incidentals, interstices, and forgotten elements of the first year of America's Civil War, 1861: The Civil War Awakening:

Like later generations, the men of the 1850s and 1860s expressed their ideals of masculinity through their physical appearance. Most noticeable, and revealing, was the astonishing profusion of facial hair that sprouted forth during those years, including on the previously smooth faces of [James] Garfield and his friends. For a century and a half, American men (and most Europeans) had, nearly without exception, gone clean-shaven: it was a sign of gentility, civility, and restraint. (In the late eighteenth century, one Philadelphia woman considered it a matter of note that she had seen "an elephant and two bearded men" in the street that day.) This changed very suddenly. Most American historians, when they have considered the topic at all, have assumed it had to do with Civil War soldiers avoiding the inconvenience of shaving while in the field.

In fact, the phenomenon predated the war by a number of years--and was the subject of a great deal of contemporary comment and debate. As early as 1844, one physician began inveighing against "woman faced men" with their habit of "emasculating [the] face with a razor," even suggesting that shaving caused diseases of the throat. At the time, this was still an eccentric opinion. By the following decade, however, talk of a "beard movement" was sweeping the nation. In 1857, a conscientious journalist took a stroll through Boston's streets and conducted a statistical survey: of the 543 men he encountered, no fewer than 338 had full, bushy beards, "as God meant to have them," while nearly all the rest sported lesser facial hair of various sorts. Only four were "men of the old school, smooth shaven, with the exception of slight tufted promontories jutting down from either ear, as if designed as a compromise measure between the good old doctrine and modern radicalism."

Good to know that trend stories have been with us nearly as long as newspapers (though this one does seem a bit more grounded than today's "Let's go see what six hipsters in Brooklyn are doing!" variety).

No post on the history of American facial hair would be complete without a photo of Union general Ambrose Burnside, who, though no great shakes as a general, remains a familiar figure to even casual Civil War buffs for the twin redans of his facial hair. 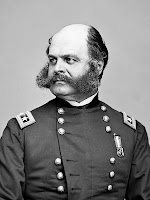