One of the ways that Robert Caro justifies the incredible length--768 pages--of The Path to Power, the first volume of his biography of Lyndon B. Johnson, is by incorporating a handful of fascinating miniature biographical and descriptive accounts of side characters who played important parts in LBJ's rise. Caro's portrait of LBJ's father, a failed alcoholic whose integrity cost him his state congressional seat, is moving, while his depiction of Sam Rayburn, the powerful Texan who was Speaker of the House during World War II, spends nearly thirty pages in giving a rounded picture of Rayburn's toughness, integrity, and essential loneliness.

The most surprising mini-portrait, at least for a non-Texan, is the final one: that of W. Lee "Pappy" O'Daniel, who in 1939 was elected governor of Texas--and in 1941 US Senator--despite never having previously been a candidate for office, never having worked on a campaign, and in fact never having voted. 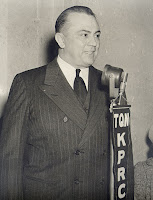 Caro spins out the story with obvious relish for its absurdities. In 1927 O'Daniel was a sales manager for Light Crust Flour, which sponsored a radio program featuring a country and western band named the Light Crust Doughboys. When the regular announcer fell sick one day, O'Daniel stepped in, and he stayed.

He began whistling along with the band. He began composing tunes, and writing lyrics. Then he began writing little poems that he recited himself.

I know we live in a less sentimental age, but see if you can wade through the sap in this next paragraph without drowning:

After a while not all songs were about flour. They were tributes to Texas ("Beautiful, Beautiful Texas," "Sons of the Alamo") and to cowboys ("The Lay of the Lonely Longhorn"). There were hymns to an old horse and to "The Orphan Newsboy." Many were about motherhood: "The Boy Who Never Grew Too Old to Comb His Mother's Hair" was a particular favorite, as was another which began: "Mother, you fashioned me / Bore me and rationed me. . . . " The songs were about current events: when the Lindbergh baby was kidnapped, the Light Crust Doughboys sang (to the tune of "My Bonny"), "Please Bring Back My Baby to Me"; when Will Rogers was killed, O'Daniel wrote: "Someone in heaven is thinking of you; someone who always was loyal and true; someone who used to be close to your side, laughed when you laughed and cried when you cried." More and more, the songs and poems were about religion--old-time, Fundamentalist, evangelical religion; "It was good for Lee O'Daniel, and it's good enough for me," the Doughboys sang.

As you might expect, the cognoscenti, such as they were, had doubts about O'Daniel's sincerity; one visitor to the studio claimed that, as the band played "That Old Rugged Cross," "O'Daniel leaned over . . . and whispered, 'That's what really brings 'em in!'"

And then, seemingly out of the blue, in 1938 he asked his listeners if he should run for governor:

A blind man had asked him to do so, he said, and he wished they would write and tell him whether or not he should. He received, he said, 54,449 replies. All but three told him to run; those three said he shouldn't--because, they said, he was too good for the job.

His campaign was, if anything, even more ridiculous: he toured in a red circus wagon with the Light Crust Doughboys playing behind him, promising a state pension plan but entirely ducking the question of how he would quintuple the state's funds to pay for it, falling back instead on yet another song to the tune of "My Bonny":

We have builded our beautiful highways
With taxes from city and farm,
But you can't pyramid those taxes,
Without doing our Texas great harm.

Oh, and like many a charlatan before and since, he claimed to be running in order to get the "professional politicians" out of governmment. And he won. Easily . . . at which point he turned out to be less interested in the pension plan than in doing the bidding of the big business interests that had secretly been backing him.

Caro's account of O'Daniel's rise runs for eight pages, and he pops up intermittently through the thirty-five that follow, as he runs against (and eventually defeats) LBJ in the senatorial race. Believe me: there's plenty more eye-popping strangeness in those pages. I won't say they're worth reading the whole book for, but they are an indication of the pleasures in store if you do tackle it.
Posted by Levi Stahl at 6:00 AM