Last week was William James week over at the Second Pass, and I contributed a post on the section in James’s Varieties of Religious Experience that deals with ghostly presences. If you’re a ghost story fan, that portion of the Varieties, though brief, is well worth seeking out: it offers up a number of accounts of visitations by sources James deemed reliable, most of them of the vague presence variety, but some more clearly embodied, the best--so creepy in its inexplicable, specific strangeness that it seems designed to drive the visitant mad--being,

the figure of a gray-bearded man dressed in a pepper and salt suit, squeezing himself under the crack of the door and moving across the floor of the room towards a sofa.

The mention of James’s inquiries into religious feeling give me the thinnest of excuses--all I need, being a blogger--to bring together a couple of very entertaining accounts of sermons I read this weekend.

First, from Brady Udall’s moving, funny novel The Lonely Polygamist (2010), which Second Pass proprietor John Williams reviewed well for the Barnes & Noble Review back in May, this memory, from the polygamist of the title, of an early encounter with story of Jonah:

He had first heard it one sticky fall morning at the Holiness Church of God in Jesus’ Name, sitting in the rough cypress pew next to his mother. The Reverend Marvin J. Peete had been cycling through his weekly routine, which involved warbling snippets of gospel standards into the microphone with the husky whisper of a nightclub crooner and then suddenly barking out terrifying declamations of Repentance! and Apocalypse! and Blood of the Lamb! But on that day his voice lowered and he began to tell a story about Jonah, the man who had disobeyed God and as a result had been swallowed by a “great and terrible fish.” . . . [He] liked . . . the description of Jonah’s time inside the whale, which was spent, according to the reverend, praying and singing canticles while perched on a giant kidney under festoons of intestines and trembling stalactites of whale mucus. Reverend Peete might not have had a solid grasp of marine mammal anatomy, but he made up for it with his descriptions of the glistening liver upon which Jonah made his bed at night and the wash of spiky and tentacled sea creatures, dead and alive, foaming around the prophet’s legs while he implored the Almighty for mercy. It took three days, apparently , for the great fish to tire of having his kidney used as a bean bag, and when Jonah was vomited up on the beach, Reverend Peete nearly gave himself in to an apoplectic fit with the glory of this moment. He cried, “Oh, Jonah! God’s reluctant servant! Look at him there, washed up on that foreign shore! Half blind and tangled up in seaweed and whatnot. And that horrible smell? It’s Jonah, people, covered with fish parts and digestive juices and so forth.”

Not much on the religious front ever registered when I was kid: I’m a fair hand with the Bible, but belief was never, I think, to be my lot. Yet I do think that slime-soaked delivery of the story of Jonah would have been much, much more likely to pierce my adolescent consciousness than the immaculate ejection favored by your average children’s Bible illustrator. 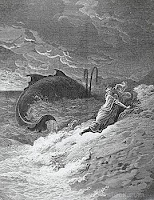 And now, for a more cynical look at the Sunday lesson, I’ll turn to James Lees-Milne, from his memoir, Another Self (1970). Lees-Milne was raised on a family estate, and his father was in a lingering feudal sense the head of the local church, which was on the Lees-Milne’s land. The father’s true church, if he had one, was the horse track, a place that the vicar made frequent, barely oblique, denunciations of from the pulpit:

The victim would visibly squirm in the manor pew. Not satisfied with this awful warning the Vicar would after a pause give the answer in a voice so like my father’s as to be an unmistakable imitation, “I acknowledge my transgressions, and my sin is ever before me.” All my father could do was shake his head. In that way the Vicar won the first round.

But Lees-Milne’s father got his own back when it came time to do the day’s Bible reading, which he got to choose:

On one occasion in a particularly vindictive mood he announced, “Here beginneth the 36th chapter of the Book of Genesis, verses 1 to 43."

After transfixing the Vicar in his turn with a steely eye, he started off: “Now these are the generations of Esau, who is Edom. Esau took his wives of the daughters of Canaan; Adah the daughter of Elon the Hittite, and Aholibamah the daughter of Annah the daughter of Zibeon the Hivite; and Bashemath Ismael’s daughter, sister of Nebajoth. And Adah bare to Esau, Eliphaz: and Bashemath bare Reuel.” On and on he droned. This was what he called enjoying his pound of flesh. First the farmers’ wives, then Miss Empey, although so devout, then the schoolmistress dropped off, and last of all the servants from the manor at the risk of a severe reprimand after the service. Not so the Vicar. He shifted, took off his pince-nez, cleared his throat, and puffed out his cheeks to no avail. My father droned on.

Yet another reminder that even for a nonbeliever, the Bible can make a pretty good weapon--there’s no bore like a Begat bore.
Posted by Levi Stahl at 7:17 PM