Oh, what we endure for the sake of being unfashionably fashionable! {Photo of the ol' seersucker in its natural environment by rocketlass.}

As anyone who's manned a counter in the book trade can tell you, some customers become visibly embarrassed when needs of one sort or another lead them to carry to the counter, say, books of very specific medical advice; handbooks for disorders of the mind, heart, or relationship; or luridly decorated volumes of plain, old-fashioned smut. This is, we must admit, not unreasonable: the bookseller may not judge, but oh, he notices.

I, on the other hand, will admit to having felt a tinge of embarrassment in St. Mark's bookshop in New York recently when, while wearing a seersucker suit on a sweltering day, I couldn't resist the lure of a front-counter stack of Honore de Balzac's Treatise on Elegant Living (1830).

It is, after all, one thing to wear a seersucker suit; yet another to wear it in Manhattan on a Sunday; and still a third to, while wearing it, buy a seminal tract on dandyism. As rocketlass said, or at least thought, in the matter of the fez, there are lengths to which one may go and there are lengths to which one, &c. And, it must be said, it is that remaining capacity, however minor, for recognizing absurdity in menswear that has kept me, thus far, out of plus fours.

So perhaps I was right to be embarrassed--but I was also right to buy the book! For what reader of sense would pass it up? It's a lovely little edition, whose translator, Napoleon Jeffries, acknowledges right off the bat one's immediate objection: that Balzac, as evidenced by the photo below, was no dandy. I think there is food on his shirt!--and that's far from the worst of his sins against fashion in this photo! 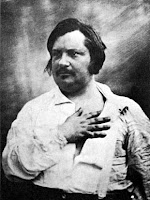 As Jeffries explains in his brief but solid introduction:


Even those familiar with Balzac's novels may be initially taken off guard by the notion of that giant presenting himself as an expert on elegance--let alone a self-proclaimed originator of, to use his own coinage, the new science of "elegantology." Even more surprising may be the fact that Balzac considered himself something of a practitioner of the science. He was an odd manifestation of early French dandyism: taking his cues in dress from friends such as Eugene Sue and Lautour-Mezeray (both of whom make appearances in this treatise), Balzac proved to be more of a part-time dandy. The dandy memorialist Captain Gronow provided a particularly amusing assessment of the man's elegance in practice: "The great enchanter was one of the oiliest and commonest looking mortals I ever beheld; being short and corpulent, with a broad florid face, a cascade of double chins, and straight greasy hair . . . [he] dressed in the worst possible taste, wore sparkling jewels on a dirty shirt front, and diamond rings on unwashed fingers."

Though he was obviously no Beau Brummell, nonetheless Balzac demonstrates in this tract that he did at least understand elegance. Take, for example, this brief definition, which feels a bit like Aristotle slurped through a bendy straw labeled Spinoza:


[E]legant living has its deadly sins and its three cardinal virtues. Yes, elegance is one, indivisible, like the Trinity, like liberty, like virtue. From this follows the most important of our general aphorisms:


The constituent principle of elegance is unity.

Unity is impossible without cleanliness, harmony, and relative simplicity.


But it is not simplicity rather than harmony, or harmony rather than cleanliness that produces elegance: elegance is born from a mysterious concordance between these three primordial virtues. To create it suddenly everywhere is the secret of innately distinguished spirits.

When analyzing any instances of bad taste that taint a stranger's clothing, apartments, speech, or deportment, observers will always find that they sin through relatively perceptible violations of this triple law of unity

Now, aren't you grateful that I was willing to endure the (admittedly unexpressed) scorn of the St. Mark's clerk to bring you this? (To say nothing of the sweat--good god, seersucker, for all its charms, is far from proof against the diabolical team of Sol and asphalt that is a New York June!)
Posted by Levi Stahl at 9:39 PM