"The sale of letters is a strange thing, though, a very different matter, it seems to me, from books," or, Letters Week Part V! 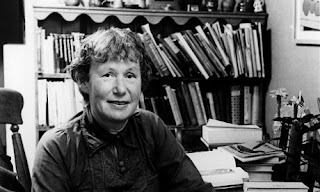 What set me paging through my various collections of letters this week were the reviews heralding the publication in England of So I Have Thought of You: The Letters of Penelope Fitzgerald. Fitzgerald--whose collection of essays and reviews, The Afterlife (2003), was the subject of my first published review, in the Bloomsbury Review--has long been a favorite, her concise and moving novels a forceful reminder of the power of leaving out; now that I have the volume of her letters in hand, I'm pleased to find that the intelligence, gently ironic humor, and deep sympathy that mark her novels are in evidence in her correspondence as well.

I've only spent a couple of hours with the book so far, but I've already found much that's worth sharing. As I do with any book related to twentieth-century literary culture, I started with the index: Powell, Anthony. Powell does turn up, playing an unexpectedly heroic role, in a letter that is most likely from 1979 (Note to young writers: always include the year on your letters!) to novelist Francis King. At the time King was helping Fitzgerald research a biography of novelist L. P. Hartley, but Hartley's great love, Lord David Cecil, was stymieing her; she wrote,

My LPH situation has got better and worse, (in a way) as Anthony Powell, whom I went to see, rang up Lord David, out of pure kindness of heart, and told him to come off it, as Leslie's biography was sure to be written some time.

Powell's entreaty--delivered in perfectly Powellian fashion, relying equally on old-chap camaraderie and the inevitability posed by time's relentlessness--worked, as Lord David wrote Fitzgerald to say that he had "withdrawn all objections." Sadly, he soon adduced new ones, and the biography was never finished; our loss and Hartley's both, one has to believe, as Fitzgerald was a talented, perceptive, and kind biographer. She argued for the value of her approach in another letter to King:

A primary biography by people who know the subject and are really fond of him or her is a protection, I think. Perhaps artists should be judged by their work, but it's only too evident that they aren't.

That sympathy was where Fitzgerald rooted herself as a biographer; as she explained, first in a letter to her friend Hugh Lee in 1978, then again in more polished form to her American editor Chris Carduff in 1987,

[O]n the whole I think you should write biographies of those you admire and respect, and novels about human beings who you think are sadly mistaken.

Fitzgerald frequently returned in her letters to the myriad difficulties facing a biographer. Here, for example, in a letter to her publisher Colin Haycraft, dated October 12, 1978, she noted early problems getting needed information about Hartley:

I asked for information about Leslie Hartley in the TLS and got a number of replies, some referring discreetly to the drink problem--one of my difficulties however is that the only person I can find who was actually at Harrow with Leslie (in 1910) is Paul Bloomfield, who is at the same time much too easy and much too difficult to deal with, and also I wonder how much longer he'll last?

I particularly enjoy that letter because, though Fitzgerald is writing it from the perspective of a biographer, the line about Bloomfield--who is simultaneously too easy and too difficult--is the thought of a novelist, marveling at layers of complexity. A similar tone inflects a line from a letter to writer Harvey Pitcher, whom she was attempting to buck up about a biography he was struggling with:

What is odd is that the people concerned, it seems, both did, and didn't, want to conceal everything.

In another letter to Pitcher, from 1988, she succinctly defended the biographer's art, while addressing the question--inescapable for fans of the form--of the lasting emotional effect of digging so deeply into another's life:

I was surprised, though, at what you said about biography. It seems to me that (particularly if you have the letters, and if you knew the subject yourself or can get hold of someone who knew the subject) you can know him or her at least as well as anyone you meet in real life. The trouble is that it's rather difficult to shake the people off when the book is written, and return to yourself. They're not to be got rid of so easily.

Fitzgerald's biographical endeavors also caused her to be particularly attentive to the fates of letters. Still wrestling with the Hartley problem, she wrote to King on June 2, 1978 that, unfair though it may be, she's sure that a new, revealing biography of Edith Sitwell will frighten friends and relations of Hartley into reticence, and

I'm sure going to upset Norah very much and cause more wholesale destruction of letters &c. Well,--"publishing scoundrels!"

Of an earlier biographical subject, the poet Charlotte Mew, she wrote to Forster scholar Mary Lago in 1994,

I never did manage to find the crucial letters or information, although I'm sure they exist; Professor Friedmann said to me--"if there's no proof that a letter's been burned, it must exist somewhere.

Alas, I fear that Professor Friedman is overly optimistic, time and chaos being the fiends they pride themselves on being.

I'll close with a line that made me break out in a broad smile, from a letter of November 20, 1980 to her editor Richard Ollard:

It would be better to write long novels and short letters.

No fan of Fitzgerald's novels could wish that she'd taken her advice seriously; now that I've gotten a chance to enjoy her letters, I'm doubly glad.
Posted by Levi Stahl at 8:55 PM

Labels: Anthony Powell, L. P. Hartley, letters, Penelope Fitzgerald, So I Have Thought of You