If you follow me on Twitter, you'll know that I have been ecstatically excited for months now about a book I'm handling publicity for in my day job at the University of Chicago Press: Laura Dassow Walls's new definitive biography of Henry David Thoreau. I've been a Thoreau reader for years--since the publication of the one-volume edition of his journals by the NYRB Classics line a few years back, he's been an almost daily companion--but Laura's book showed me a depth and complexity, and an aliveness, that I didn't think possible. It's an incredible book. If you don't want to take my word for it, take a look at the roundup of praise I put together for the Press blog last week on Thoreau's bicentennial.("Superb," "compelling," "a great service to American letters," "remarkable," "engaging," "every page feels essential," and so on . . . )

This all sent me back to Walden for the first time since I was 19. I knew from having read Laura's insightful chapter on it that it was a more heterogeneous, more strange book than I recalled or than its general reputation might have it, but I still wasn't prepared: it's nothing like a straightforward account of time in the woods. If it were published today, it would be structured carefully, from his decision to set out on this experiment through the moment he returned home, and its observations would be carefully arranged, themes and larger points drawn through the book in a way to maximize their impact.

Instead, it's a grab-bag of Thoreau's thoughts. It's more like reading his journal than I expected. He opens with the idea of moving to the woods, then immediately veers off into extended thoughts on other related topics. It's about 40 pages before he gets back to the details of his experiment in living--and then almost immediately he veers off again. Like everything he wrote, it is driven by his broad and intense interests, by what's engaging him at a particular moment--and, ultimately and most importantly, by his keenly observing eye. He never merely looked at the world: he looked closely, and thought about the meaning and importance of what he saw.

A century and a half after publication, many of Walden's phrases are familiar, repeated so much that they've become barnacled unto cliche. But if you can even briefly see some of them fresh, their power--both of ideas and of phrasing, is undeniable. I'll leave you with one from late in the book. Try to see it as if you've not known these lines before; see if you feel the thrill I did.

I learned this, at least, by my experiment; that if one advances confidently in the direction of his dreams, and endeavors to live the life which he has imagined, he will meet with a success unexpected in common hours. He will put some things behind, will pass an invisible boundary; new, universal, and more liberal laws will begin to establish themselves around and within him; or the old laws be expanded, and interpreted in his favor in a more liberal sense, and he will live with the license of a higher order of beings. In proportion as he simplifies his life, the laws of the universe will appear less comples, and solitude will not be solitude, nor poverty poverty, nor weakness weakness. If you have built castles in the air, your work need not be lost; that is where they should be. Now put the foundations under them.

Happy summer, folks.
Posted by Levi Stahl at 9:36 AM 2 comments: 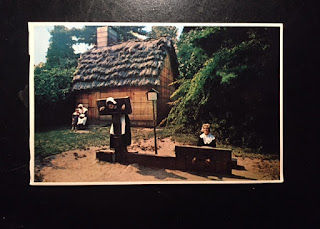 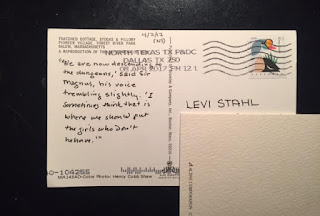 Always a pleasure to hear from Texas in this fashion. And to receive a missive that clarifies that it's dated according to the New Style.
Posted by Levi Stahl at 2:40 PM No comments: