Chicago closed its lakefront parks in mid-March, after an unseasonably warm day brought crowds of a size that was worrisome at that early stage of the pandemic. When the park reopened in June, one thing I noticed immediately was the disappearance of a number of familiar desire paths, those "paths and tracks made over time by the wishes and feet of walkers, especially those paths that run contrary to design or planning," as Robert Macfarlane puts it. With no feet to follow what Macfarlane calls their "free-will ways," the grass had reestablished dominance, obscuring the scars of human activity.

By the end of the summer, most of them had returned. One, however, which has been a part of my running route for two decades, turned out, unexpectedly, to be an expression, it seems, of my desire alone. That's it below. Three months of treading it every other day, once in each direction, had just enough effect to make it barely legible. To the extent that you can pick it out, you're seeing an image of my devotion to habit. 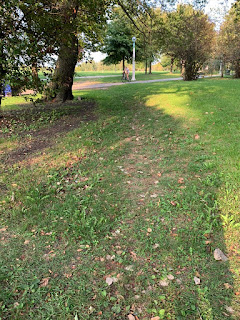 There's so little to us when we're young. There was a time around age eighteen when I viewed, and presented, the fact that I was a Van Morrison fan as a salient aspect of my self. We have so little experience, have made so few lasting decisions, and the core elements that are likely to last—namely, our relation to our family and the specific ways in which they've set us spinning and launched us into the world—are the part we're least likely to see the value of attending to or foregrounding at that age. It's no wonder we build a carapace of tastes and likes and call it a self.

If we're fortunate, over time we outgrow that shell, and while we retain bits of it—I'm still a Van Morrison fan—those become attributes rather than essence. (If we're not fortunate, we become one of those people screaming online about the need to release the Snyder Cut.) That fact, as much as a belief in the inherent dishonesty and toxicity of nostalgia, is what keeps me from pining for youth. I recognize the me of that era; I'm still keeping a number of the same desire paths visible through the undergrowth of adulthood. But the limits are so obvious, the center so ill-defined, that I can't imagine wanting to be back there. (When I read the Romantics, which I do with love, I nonetheless find myself, when I hit lines like this,

To spread a rapture in my very hair,

remembering when, age fifteen, I listened to Chris Isaak's "Wicked Game" dozens of times on repeat, actively pushing myself to access some presumably deep, hitherto untapped, well of loss and pain.)

Time builds the self that replaces the one we actively construct as teens. And it does so through accretion, less by way of active choices than by unthinking repetition. We make habits, then those habits make us. Samuel Johnson, one of our greatest thinkers about the good and the bad of the habitual, wrote in "The Vision of Theodore":

It was the peculiar artifice of Habit not to suffer her power to be felt at first. Those whom she led, she had the address of appearing only to attend, but was continually doubling her chains upon her companions; which were so slender in themselves, and so silently fastened, that while the attention was engaged by other objects, they were not easily perceived. Each link grew tighter as it had been longer worn, and when, by continual additions, they became so heavy as to be felt, they were very frequently too strong to be broken.

Habit is the stuff of adulthood, the organizing principle atop which is built the whole web of life and obligation that at times can feel inescapable, as Henry James notes in "The Great Good Place":

There was no footing on which a man who had ever liked life--liked it, at any rate, as he had--could now escape from it. he must reap as he had sown. It was a thing of meshes; he had simply gone to sleep under the net and had simply waked up there. The net was too fine; the cords crossed each other at spots so near togegther, making at each a little tight, hard knot that tired fingers, this morning, were too limp and too tender to touch.

Habit binds us, yes, but it also eases our passage through the world, freeing us from the risk of squirrel-like impulse or tharn-like terror. At the same time, however, it smooths the world's edges. Habit is the reason four years can pass in adulthood and leave little impression, whereas four years starting at fourteen remade our whole universe.

The pandemic has thrown me more than ever back on habit. It was already my mode. Every morning, I think through how I'll organize the handful of things I do each day: Work, piano, dog walks, exercise. In normal times, however, that planning is frequently disrupted by outside events, activities as simple as going out to a movie or as complicated as a trip to Japan. Since March, however, the days have varied little. There's a comfort there, especially given how fortunate my family has been through all of this. But the risk of the deadening of impression is very strong.

Autumn, therefore, came as a sort of—well, salvation feels too dramatic. Correction, perhaps, is better. A distinct change in a way that the arrival of summer didn't present. As the shadows lengthened and the light slipped lower on the horizon and gained a golden tint (How much of our reaction to that light is atavistic, how much cultural?) I attended.

And here's where nostalgia comes into play. For years now at this season I have made a habit of reading ghost stories, tales of the weird or uncanny. It's the closest thing to a deliberate reversion to youth that I experience, and this year I finally figured out why it engages me. Even leaving aside my earlier caveats about our young selves, nostalgia is beset by the problem that the feelings of youth are hard to recapture, and even harder to re-create. Christmas morning will never again glow like it once did; first-day-of-school feelings are too dissimilar from what's evoked by the first day of a new job to re-emerge. But being scared? Oh, yes, that stays with us. And the sensorium of autumn—so brilliantly evoked by Ray Bradbury,

October Country . . . that country where it is always turning late in the year. That country where the hills are fog and the rivers are mist; where noons go quickly, dusks and twilights linger, and mid-nights stay. That country composed in the main of cellars, sub-cellars, coal-bins, closets, attics, and pantries faced away from the sun. That country whose people are autumn people, thinking only autumn thoughts. Whose people passing at night on the empty walks sound like rain. . . .

—can still be potent enough to activate it in a way that is separate from our more mundane adult fears.

Pressing deliberately on that feeling, opening myself up to the ways in which, to quote Mark Fisher in The Weird and the Eerie, "the domestic world does not coincide with itself," helps me to fully live in and engage with the season, to push back against habit ever so briefly. I may still be treading the same desire paths as always, but I'm not letting them pass underfoot without notice right now.

"Custom is commonly too strong for the most resolute resolver," writes Johnson, "though furnished for the assault with all the weapons of philosophy." The added weight of a pandemic, and its forced circumscription of life, adds to the challenge. Autumn, it turns out, is a more potent weapon than philosophy.

Winter, however, is wielded by the other side. And it's almost here.