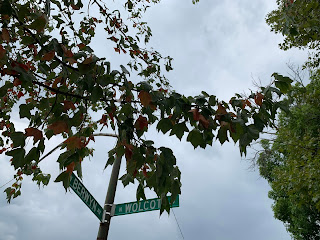 One of the very few notes of grace that has been vouchsafed us by this awful year is the position of Labor Day, which, perched as it is on the latest eligible day, allows us to retain summer, at least in a technical sense, as long as possible.

Summer comes, alleviating at least some of the strains of the spring, as it's always done, in times of plenty and times of plague.

As a rural kid who didn't see much of his friends from the end of one school year to the start of the next, I've always seen summer at least to some extent as a time of transformation. I'd return in late August to a school whose people and relationships had been wholly transformed by the sun and heat and absence of responsibility. It could be unsettling, but, as I got older and, through access to a car, could better maintain those connections, it also proved to be both beautifully seductive and largely false. At that age, the changes are real, but they're time's doing, not summer's. And if you're lucky, you're still you at the end of them.

I feel for those kids who, in the summer of 2020, are being denied those experiences by the virus. You get only so many summers; the summer when you're sixteen you get only once.

Part of the allure of summer is its sense of promise, of immortality. On a sunny day in mid-June, who can believe that time can pass, that all this can end? Our appetite in May is vast--we will squeeze every bit of life out of this coming summer! August arrives, however, and some afternoons find us inside, artificial aids helping us hide from the heat. Summers blur and blend and disappear in memory, though some stand out, for reasons obvious and not. The summer when I read the whole run of Ben Grimm's short-lived solo comic, much of it somehow while sailing through the air on a frisbee swing. The summer I first went to YMCA camp, and the one when I last did. The summer when I was in England for a few days and got to experience the late-night golden-warm light and wee hours birdsong. The summer when we got Jenkins, and together he and I discovered the joys of long, aimless, quiet walks.

Time has been strange this year, but I did not let summer pass without heed this year. Wordsworth was regularly in my ear.

The world is too much with us; late and soon,
Getting and spending, we lay waste our powers.

This was our time to expand and experience. We won't forget the summer of 2020, in part because we'll need to draw on it to warm us through the fall and winter, as we're forced back indoors and away, once again, from loved ones.

"When I think back to those days," one of W. G. Sebald's characters writes in The Emigrants, "I see shades of blue everywhere--a single empty space, stretching out into the twilight of late afternoon."

And then summer goes. Historically it's brought new tasks--harvest, canning, preparations for winter. We should take care this year to attend to that last task, in multiple ways.

But it's also always brought a new beauty, explicitly evanescent in a way that summer's beauty hides. Here's John Clare:

The thistledown's flying, though the winds are all still,
On the green grass now lying, now mounting the hill,
The spring from the fountain now boils like a pot;
Through stones past the counting it bubbles red-hot.

The ground parched and cracked is like overbaked bread,
The greensward all wracked is, bents dried up and dead.
The fallow fields glitter like water indeed,
And gossamers twitter, flung from weed unto weed.

Hill-tops like hot iron glitter bright in the sun,
And the rivers we're eying burn to gold as they run;
Burning hot is the ground, liquid gold is the air;
Whoever looks round sees Eternity there.

Autumn has long been my favorite season, its colors and chills and the way that baseball simultaneously winds down and intensifies. I'll love it once it's properly here. The river birch in our back garden, which in six weeks will be shimmering with golden leaves, would on its own be sufficient to fire that love. As would be the ghost stories native to October. The migrating birds, the marvel of which our homebound life this spring enabled us to experience in a wholly new way, will come through once again, and we'll get to share the grace of food and water with them.

Canada geese, as if to prove a point, honked overhead amid this morning's quiet rain, stretching their wings on practice flights.

"The days were few then at Dunnett Landing," writes Sarah Orne Jewett in The Country of the Pointed Firs, one of the great summer books, "and I let each of them slip away unwillingly as a miser spends his coins. I wished to have one of my first weeks back again, with those long hours when nothing happened except the growth of herbs and the course of the sun. Once I had not even known where to go for a walk now there were many delightful things to be done and done again, as if I were in London. I felt hurried and full of pleasant engagements, and the days flew by like a handful of flowers flung to the sea wind."

The theme to the 1963 film Summer Holiday, performed by Cliff Richard, was a huge hit in the UK but never made an impression over here. I didn't know Richards's bouncy recording of it when I came across the song in a collection of fakebook arrangements and learned it on the piano, and I've always heard it with a hint of melancholy. An end-of-summer song rather than an early summer song.

Here's my so-so playing, if you want to hear it.

Thomas Hardy can see us out. This is "The Later Autumn."

Gone are the lovers, under the bush
Stretched at their ease;
Gone the bees,
Tangling themselves in your hair as they rush
On the line of your track,
Leg-laden, back
With a dip to their hive
In a prepossessed dive.

Toadsmeat is mangy, frosted, and sere;
Apples in grass
Crunch as we pass
And rot ere the men who make cyder appear.
Couch-fires abound
On fallows around,
And shades far extend
Like lives soon to end.

Spinning leaves join the remains shrunk and brown
Of last year's display
That lie wasting away,
On whose corpses they earlier as scorners gazed down
From their aery green height:
Now in the same plight
They huddle; while yon
A robin looks on.