Just a quick post tonight, as I find myself distracted by baseball ('tis that time of year). I'll just share a bit from Simon Nowell-Smith's wonderful collection of anecdotes of Henry James, The Legend of the Master 1948). The book is full of unforgettable glimpses of James the man, but the best, hands down, come from Edith Wharton, a dear friend who saw him clearly and loved what she saw. This account of James's reactions to parody shows both aspects:

Still more disastrous was the effect of letting him know that any of his writings had been parodied. I had alway regarded the fact of being parodied as one of the surest evidences of fame, and once, when he was staying with us in New York, I brought him with glee a deliciously droll article on his novels by poor Frank Colby, the author of Imaginary Obligations. The effect was disastrous. I shall never forget the misery, the mortification even, which tried to conceal itself behind an air of offended dignity. His ever-bubbling sense of fun failed him completely on such occasions.

I've had James more and more on the brain lately, both leading up to and after our visit to his house in Rye earlier this month. It may finally be time to read Leon Edel's biography.
Posted by Levi Stahl at 9:53 PM 1 comment:

From Edmund Wilson's notebooks of the 1920s:

The first cold blue of autumn and the melancholy of the shore provoking thoughts not only of the end of summer, but of the pressure of time, the wavering of ambition, the disappointments of love--the period of life that approaches its close like the period of the year.

August is usually a betwixt-and-between month for me: summery, yes, but often too hot, tainted by long-distant yet still potent memories of the too-early return of school. It's the month when you start to lament what you've not done in the summer, while still not having any of the consolations of autumn.

This year, however, August was an unexpected glory. It was hot enough here and there to clearly be summer, yet pleasant enough overall to reward porch-sitting and park-walking. It had five full weekends, and we were actually home for all but one of them. Baseball, well played for the dog days, was a soothing backbeat. Hummingbirds visited, the first time.

September's arrival, therefore, is less bittersweet than usual. Summer in Chicago is a fleeting, untrustworthy, regretful thing; this year, somehow, it escaped its own nature. I look to autumn now not with the melancholy of Wilson, but the joy of Thoreau, writing in his journal on October 14, 1857:

Another, the tenth of these memorable days. We have had some fog the last two or three nights, and this forenoon it was slow to disperse, but this afternoon it is warmer even than yesterday. I should like it better if it were not so warm. I am glad to reach the shade of Hubbard's Grove; the coolness is refreshing. It is indeed a golden autumn. These ten days are enough to make the reputation of any climate. A tradition of these days might be handed down to posterity. They deserve a notice in history, in the history of Concord.

May your autumn this year bring similar shimmering pleasure.
Posted by Levi Stahl at 8:32 AM No comments: 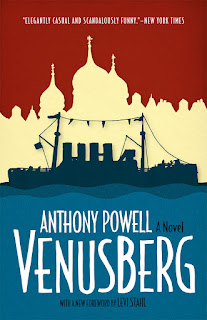 I mentioned a while back that I had written a foreword to the new edition of Anthony Powell's second novel, Venusberg, that my colleagues and I at the University of Chicago Press are publishing this fall. That book--which has the lovely cover above--will be available in early October, but you don't have to wait to read the foreword: the good folks at Open Letters Monthly have published an extended version of it in their September issue!

Longtime readers of this blog may recognize some aspects of the foreword that got an initial working out in this space; it was fun to revisit my earlier thinking about Venusberg and translate it into the more orderly, more expansive form of a foreword.

And I'd be remiss if I didn't say what an honor it is to see my name on the cover of a book alongside Anthony Powell's. To have my years of reading and thinking about Powell formalized, in a sense, in this way, makes me happy beyond words. If my praise for the book brings it some new readers, it will be modest recompense for the countless hours of pleasure that Powell has given me.

Hope you enjoy it--and while you're there, check out the rest of OLM's offerings. Month after month, they put out a strong magazine, full of interesting voices writing about unexpected books.
Posted by Levi Stahl at 8:18 AM 1 comment: