The first book I read this year was a Herman Wouk's 1952 Pulitzer Prize winner The Caine Mutiny, a Christmas gift from a friend of discerning reading taste. Wouk's novel had the misfortune to be published a year after James Jones's From Here to Eternity, which won the National Book Award, as Wouk explained in a foreword to a 2003 paperback:


Early in 1951 there appeared a gigantic army novel, From Here to Eternity, at once beautiful and brutal. . . . It won critical hurrahs and instant vast popularity, and my book came out in its shadow to a discouragingly poor start.

However, in a reminder that the early 1950s were a different, distant era, Wouk goes on to say that sales began to perk up a bit, and then one particular retail decision fanned them into a flame:


The Doubleday people . . . advised me to go and see for myself at Macy's, which was having a price war on the two books with Gimbel's. . . . It was indeed a once-in-a-lifetime sight, people lining up through the department store and out into the street just to buy my novel, or From Here to Eternity, or both.

What also speaks powerfully of another era is what Wouk says he was told about early attempts to sell film rights: "Nobody is interested in World War II anymore." Just a bit more than five years after victory, another war--in which staggering numbers, by our contemporary standards, of American soldiers would be killed--quietly underway in Korea, and what people wanted, if the movie scouts were to be believed, was to move on.

You can understand it, certainly. Read any good memoir or novel that encompasses V-E Day and the weariness that underlies the relief is palpable. But at the same time, looking back at the literature from the period, we realize that while the men who served may have wanted to leave the war behind, it wasn't quite done with them yet.

The Caine Mutiny is an interesting example of that. It's in a lot of ways a distinctly untroubled book, given the subject, but at the same time it's about how the war years turned a whole lot of callow boys into men. Wouk's main character, Willie Keith, sees the Navy simultaneously as his duty and, once he gets there, as a job. Through the course of the book's 500+ pages, he'll struggle with the central fact of military service: that it's designed to strip you of your individuality in order to serve a larger goal, and that to do so it has to in many ways be a dumb, brutal, machine-like system. But whereas James Jones's Robert Prewitt is determined to fight that machine, even if it costs him everything, Willie Keith is focused on living through the experience, and helping his shipmates do the same. Reading about Prew is a bracing, troubling experience; reading about Willie Keith's service is like watching a version of the growth and maturation we all (one hopes) experienced in our early adulthood. As a portrait of that process, and its acceleration in wartime, The Caine Mutiny is wholly convincing.

What remains most interesting about it after all these decades, however, is the turn it takes partway through. (Given the prominence of the film version, I'll assume there's little that can surprise you, but if you've not read or seen it, you might want to stop reading here.) Up through the titular mutiny, we've more or less been on Willie Keith's side. We see his flaws, and we do get some other perspectives, but he's our focal point and the character who most readily draws our sympathy. So when the mutiny occurs, and Keith plays a major part, we blow right past our nagging questions about its propriety. The moment is dramatic, and our protagonist has chosen a side, so we align. But then . . . the trial comes, and Wouk does something remarkable: he shows us how Keith was wrong--and therefore, by extension, so were we. Neither side is clear-cut, but the very fact that Wouk is able to upend our understanding, push against our sympathy, is impressive, and  would in itself be enough to recommend the book. It's a feat of storytelling.

These days, The Caine Mutiny still lives to a large extent in the shadow of From Here to Eternity. Wouk is seen as a craftsman, Jones more like an artist; Jones's story of individuality and self-torment draws more interest than Wouk's tale of men setting out to do a difficult job. But both novels are worth reading, and both, I think, belong, with James Gould Cozzens's Guard of Honor and Irwin Shaw's The Young Lions, in the small group of essential novels about the war.
Posted by Levi Stahl at 8:55 PM 2 comments: 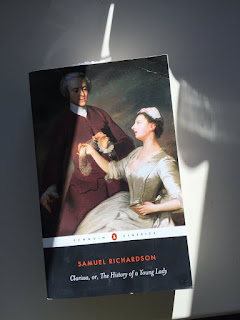 "I am extremely concerned, my dearest friend, for the disturbances that have happened in your family . . . "
Posted by Levi Stahl at 6:51 PM 3 comments: