Are you an Anglophile? Take this simple quiz and find out! 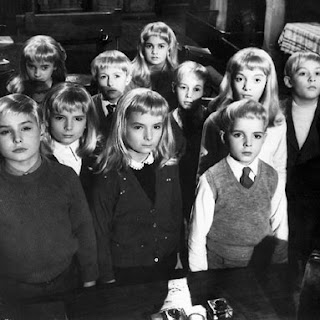 Reading John Wyndham's creepy and well-conceived The Midwich Cuckoos (1957), which was later filmed as The Village of the Damned, brought me several unexpected pleasures.

1 I smiled at this sentence describing the sleepy hamlet of Midwich:

And before that it hit the headlines--well, anyway, the broadsheets--when Black Ned, a second-class highwayman, was shot on the steps of The Scythe and Stone Inn by Sweet Polly Parker, and although this gesture of reproof appears to have been of a more personal than social nature, she was, nevertheless, much lauded for it in the ballads of 1768.

Then I stopped, for it occurred to me that here was a perfect test of whether a reader is amenable to English literature: this droll, historically inclined sentence, which draws its arch-eyebrowed humor largely from its balanced, careful organization, seems characteristic of the dominant strain of the nation's literary output. A reader who pauses to enjoy this sentence might as well move on to Dickens, Thackeray, Waugh, Powell, Fitzgerald, and others. One who doesn't should probably plump for Dostoevsky or Melville instead.

2 As I was reading the book I realized that Ed's and my recent creation of the Invisible Library has unexpectedly added a new layer of drama to my reading. Early in the novel, the narrator refers to Midwich resident Gordon Zellaby's work of philosophy While We Last; soon after, Zellaby himself mentions that the manuscript for his next book, The British Twilight, is overdue.

I snapped to attention: would he--given the distractions posed by an infestation of possibly alien children--deliver the manuscript? Would The British Twilight ever be published--and thus available for stocking at the Invisible Library?

Sadly, John Wyndham seems to have been far less concerned about the fate of The British Twilight than I am, for the novel ends without a definite answer. Given, however, that nine years pass between the initial mention of the book and the conclusion of The Midwich Cuckoos, I decided, in my role as Invisible Librarian, that Zellaby--a professional philosopher--would surely have found the time to finish The British Twilight at some point. Thus a copy now resides on the "Z" shelf.

Did I make the right decision? Only Wyndham would know for sure, and he left this world nearly forty years ago; should his spirit visit the Library, I'll let you know.

3 Because I've had the Invisible Library on the brain this week, I also perked up at the following line spoken by a character:

What's going on here is the burning of books before they have been written.

The character is using books as a metaphor to describe the short-sightedness of the government's failure to study the alien children, but it also seems like a phrase one might find decorating one of the more cobwebby carrels in the Invisible Library.

It seems like it would go nicely that area of special collections that would house lost books like Profiles in String, the greatest work of X. Trapnel, the only manuscript of which was chucked into a Venetian canal by Pamela Widmerpool, because "it wasn't worthy of X."

Now any reader in possession of an Invisible Library card can see for himself whether Pamela was right . . . or whether perhaps the book was brilliant, and that was why it haunted her . . . if that was why, after Trapnel's death she admitted with a shiver, "I see that manuscript of his floating away on every canal."
Posted by Levi Stahl at 8:11 PM