"Been having a filthy time lately," or, a letter from Julian Maclaren-Ross 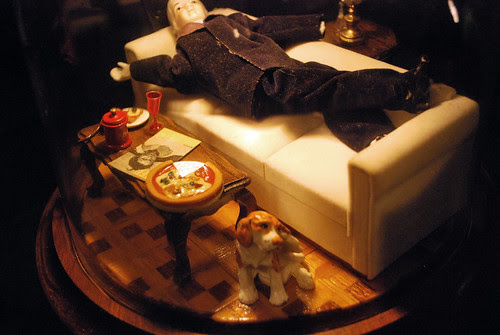 I'm so wrapped up in William Boyd's Any Human Heart today that I can't bring myself to put it down and write a proper post. Instead, I'll share a particularly good letter from writer Julian Maclaren-Ross (who doesn't turn up in Boyd's novelized tour of the English literary scene of the twentieth century--though Anthony Powell, who immortalized Maclaren-Ross as the character X. Trapnel in A Dance to the Music of Time, does make several appearances).

Maclaren-Ross's recently published Selected Letters (2008) is bound to be of interest to any fan of his writing, if only because the letters are full of ideas and proposals, many never realized, for stories, adaptations, reviews, treatments--anything that might bring in some money. Maclaren-Ross was such a wastrel and led such an itinerant, hand-to-mouth existence that the vast majority of the letters in the volume involve him attempting to cadge money from someone, either in return for amorphous future work or simply on the grounds of friendship. Petulance and self-righteous anger greet the frequent refusals; as those familiar with his life already know, he could be quite a difficult man to be around.

For sheer directness and goofy pathos, no letter in the batch can top this one to his friend, writer Dan Davin, from the summer of 1955:

My dear Dan,
Thank you for the drink last night.

I'm sorry I was taken queer before the end & had to go; but truth is I haven't had anything solid to eat for some days and have had to stay in and work nonetheless: also my little illness is troubling me a bit.

Until the holiday is over & the editors get back & get to work, I shan't have any money at all--which means Wed. or Thurs. at earliest.

Have you any money?

I do not have any.

I do not have cigarettes either.

Tonight i could go down to Royal Oxford and get tick, but I can't get cigarettes on the bill--or cigars. Then tehre are 2 or 3 days to get over before what's owing to me comes in; and meantime I must do more work. On empty belly & no fags, not easy.

If you have any money please let me have some. I will pay.

I will look in on you at home about 7.15 p.m. (when you've had dinner) and hope for best. Unless you've a moment to look in here sometime before.

Don't want to come over to pub, because crossing road makes me dizzy in this state; also am not fit company just now in big crowd.

This letter written v. simply because I expect you've a hangover; & I can never take anything in, myself, when I have.

I want to ask advice about something; but won't while you've guests to attend to.

Will go to sleep now. Nothing else to do.

I like to think that Davin, hangover or not, at least came across with some cigarettes, if not bundles of cash. For once, I'm with Maclaren-Ross: given his obvious condition at the time of writing, anything less seems insupportable. 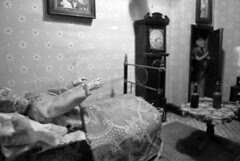 Labels: A Dance to the Music of Time, Anthony Powell, Julian MacLaren-Ross, letters