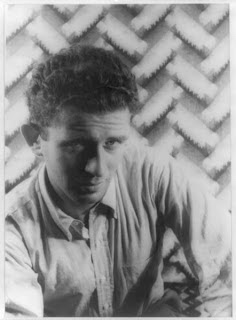 From "A Review of My Contemporaries," by Neal Pollack, collected in The Neal Pollack Anthology of American Literature (2000)

He launched himself at me like a jackal that had skipped breakfast. He grabbed my shoulders. I slipped in a pool of blood and saliva, momentarily dazed by the swirl of lights and smoke and laughter.

Mailer threw punches and kicked at my groin. I struggled, feeling, for the first time in my literary career, pure terror. My arms were leaden, my legs unhelpful.

"Four hundred dollars on Mailer!" I heard from the crowd.

Though I think of Neal Pollack as pretty much a one-joke writer, I do enjoy the above piece, wherein he engages in a rough-and-tumble fistfight with the literary giants of Mailer's generation, finishing by besting Mailer himself. It's the one time when Pollack's faux arrogance seems appropriately deployed, reducing the whole question of literary greatness to a goofy gladiatorial bout, fueled by the same mix of self-promotion and pugnacity that defined Mailer nearly as much as his writing. The obituaries for Mailer this week have been full of similarly ridiculous stories of fistfights and rages; my favorite is this one from the Telegraph in which his fists prevail, but he is defeated nevertheless:

Seven years later, at a party, he threw a glass at [Gore Vidal] and, by some accounts, including Vidal's ("I saw this tiny fist coming at me"), punched him. Still on the floor, Vidal announced: "Words fail Norman Mailer. Yet again."

Aside from a bewildered high school reading of Tough Guys Don't Dance (the only Mailer our local library owned), I've actually read very little of Mailer's writing. Every time I think I might want to read him, what stops me is thinking of this exchange from Murray Kempton's account of the 1968 Democratic Convention in his "The Decline and Fall of the Democratic Party." Mailer is arguing that they must force Mayor Daley's hand, make him to take an action that will register with everyone as inexcusable:

"Why is it," [Mailer] said to me, "that I have never hit you? it is because you represent the face of decency." I thought, first, that he might have chosen a better example, second, that such distinctions among faces cannot have inhibited Norman at every moment in his prior experience, and, last, that I must explain to my son that the recognition that you are in the presence of a truly large personage is not hampered but completed when you understand that you can laugh at him a little. I said none of these things and went on listening. We must raise the ante, Norman continued, we must make him hit the face of decency.

Kempton goes on to get at exactly why I find Mailer's public persona uncongenial, despite all the undeniable intermingled good qualities:

Norman said that if I would go alone, I had more guts than he did. And I wondered again, as I often did, how insubstantialities like guts can worry men so much more intelligent than I. I remember the war and its few patrols, and that acceptance of death that occasional soldiers know just once or twice and real soldiers know many times before it kills them. I remember coming out of the hills in that state of peace possible only to a man when he has known the enemy, and assured that I would never again fear gunfire. Then I was asleep in my tent, and some lonely Japanese Betty came over and began firing those silly white tracers and I, with nothing to fear, ran panting, almost gibbering, from tree to tree. The one thing that guts is not is a quality that can be depended on. That is why it is useless continually to test it, because there is always a time when it fails almost anyone. Bravery is irrelevant; unless you have the dangerous good fortune of not knowing you are in danger, the trick is to anticipate; as often as not, you will act badly any time you are surprised. Dignity, not courage, is all anyone can hope to keep; how odd that Mailer should so little understand his life as not to see that one of its more significant achievements has not come from its tests of his bravery but from its continual salvage of dignity intact.

Though I don't have the personal experience with danger that Kempton uses to back up his position, I am with him in being confused by those worries about toughness. The more that I associate Mailer with such questions, the less interested I am in reading him; whether that's secretly fueling my dislike of his prose style as well is an open question. But I am willing to be told that I'm mistaken, and I've not given up on the idea of finding something of real value in his work. My friend Erin swears by The Executioner's Song, which she's read many times (maybe even many times in succession back in high school?), so I have it on my shelves awaiting the right day.

Tonight as I was reading about Adam Sisman's Boswell's Presumptious Task: The Making of "The Life of Dr. Johnson" (2000), I was reminded of one of the most notorious episodes of Mailer's life, his championing of convicted killer Jack Abbott. Abbott's letters to Mailer had convinced the writer of his repentance; Mailer helped him publish a prison memoir, then he advocated for Abbott's release. Six weeks after being paroled, Abbott murdered a man. Mailer later described the incident as "another episode in my life in which I can find nothing to cheer about or nothing to take pride in."

The Abbott case came to mind while I was reading about James Boswell's legal career. Having grudgingly acceded to his father's wishes and begun to practice law in Edinburgh, Boswell quickly

acquired a reputation for defending the hopeless and the helpless: drunken soldiers, forgers, horse-thieves, and sheep-stealers, rioters, brawlers, arsonists, the poor and the needy, clients that other, more prudent advocates avoided.

To his great credit, Boswell vigorously defended his clients, in the process sabotaging (perhaps intentionally?) his long-term career prospects. He grew particularly attached to his first criminal client, John Reid, who stood accused of the capital crime of stealing sheep. He succeeded in getting Reid acquitted, but eight years later Reid faced a similar charge and

Despite Boswell's advocacy being conducted "in a very masterly and pathetic manner"--so much so that he was applauded by several members of the jury when they convened at a tavern afterwards--Reid was this time found guilty.

Overwrought, and presumably feeling the sentence of death a grave injustice, Boswell huddled with Reid in his cell for hours, then walked with him to the gallows:

Desperate to save Reid's life, he planned to have the body cut down, carried into a stable, and there resuscitated with the aid of a surgeon. But when the moment came, Reid was beyond recall. This failure, and the pity Boswell felt for his hapless client, affected him deeply--though it must be admitted that he relished the drama of the occasion.

Though the cases are, to be honest, not all that similar--it's hard to view Boswell's actions in a very bad light--the commitment and determination of both Boswell and Mailer are undeniable. And though I'm not sure I'd have made the connection had I not just been reading Mailer obits, the men resemble each other in other ways, too: their genius for unrelenting self-promotion, their vanity (that presumably hid self-doubt), and their seemingly insatiable hunger for the spotlight.

What would they have made of each other? How likely is it that, like Vidal and Mailer, Jimmy Breslin and Mailer, the world and Mailer, they would have come to blows?
Posted by Levi Stahl at 7:52 PM