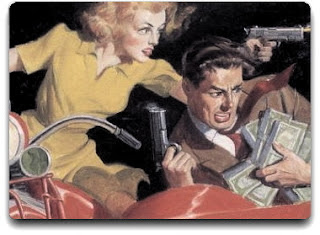 Given that I've just returned from a trip, and I know better than to travel without a Hard Case Crime novel or two, it's time for a Crime Novel Roundup!

A couple of months ago, I mentioned how much I was enjoying the early pages of Robert Terrall's Kill Now, Pay Later (1960), which is rife with exchanges like this one:

"A very nice-looking dish was waiting for him. Dark hair, glasses. She had a raincoat on that was too big for her, and she kept it on."

"No wonder," I said. "It was my raincoat, and all she had on underneath was one of my drip-dry shirts."

I quoted a bunch of other favorite bits in my earlier post. Though it was a lot of fun--I laughed out loud several times--Kill Now, Pay Later was ultimately a bit disappointing--I kept waiting for the pile of deaths and very bad things to matter to someone, but they never really do. The whole remains extremely light, reminding me a bit of Kyril Bonfiglioli's Mortdecai books, where the crime seems to exist only to enable the drinking and the wry commentary. But maybe I'm being unfair: I came to Kill Now, Pay Later straight from a couple of Lawrence Block novels, where consequence and culpability are never far from the foreground; had I brought to the book a different set of expectations, maybe I would have been able to fully settle in and enjoy it.

The other crime novels I read that same weekend, Cornell Woolrich's Fright (1950) and Georges Simenon's The Man Who Watched Trains Go By (1938), both hinge on unexpected turning points in otherwise ordinary lives--but that's where the similarities end. Woolrich's novel is about a man who accidentally kills a woman who attempts to blackmail him on the eve of his wedding. In the ensuing years, while remaining in some ways completely sane, the man's ever-deepening paranoia drives him to commit hideous acts. Fright is a straightforward crime novel, a study of a weak character deformed by circumstance, and while it lags at times, Woolrich's chilling accounts of his protagonist's coldly violent attempts to cover his tracks pretty much compensate for any longueurs.

Simenon, on the other hand, plunges the reader right into insanity, as his protagonist, Kees Popinga, after discovering that the company he's worked for all his life is bankrupt, throws up his middle-class life completely. He kills a woman, then another, and he's soon on the run from the police, yawing between arguing with himself that all he needs to do is find a sympathetic person to listen to his story and positing himself as a near-Nietzschean superman, beyond all petty social strictures. Simenon's study of curdled normality is unsettling, yet at the same time often grotesquely funny: Popinga is an incompetent, intolerable megalomaniac, and as he sinks further and further into paranoia, his plight becomes cartoonishly ridiculous; what began as a character study ends as a bizarre social comedy.

Megalomania serves as a good transition to Ken Bruen and Jason Starr's Slide (2007), as it's the defining trait of Slide's best character. A follow-up to their great Bust (2006), Slide follows the two survivors from that book's band of incompetents, Irish-American slut Angela Petrakos and nasty, murderous, pathologically self-regarding businessman Max Fisher. In Bust, Bruen and Starr achieved something rare and impressive: they set a half-dozen or so distinct characters loose in pursuit of various ends, and succeeded--without undercutting any individual characters' motivations--in bringing them all together in a spectacularly complicated, satisfying, and funny plot. Bust was nasty and violent and deeply misanthropic, and it was one of the best crime novels I've read in recent years.

Slide, though a lot of fun, reads like a slighter sibling: aside from Max Fisher--who, having become a crack-addicted drug dealer, has renamed himself The M.A.X.--the other characters are less vibrant than those of the first novel, and their desires less intricately intertwined. The M.A.X., however, is so funny that he almost singlehandedly redeems the book: his mixture of arrogance, incompetence, and brutality are hideously hilarious. An example, taken nearly at random:

He put the Glock down the waistband of his trousers, in the small of his back, and went, "Ouch." Jesus, it was cold. Did he have time to warm it up? Could you microwave a gun? And it pressed against his bum sacroiliac, shit. He took the piece out, got his black suede jacket. It had that expensive cut, you saw it, you whistled, it said taste and platinum card. Yeah, after today, it was platinum or bust baby.

I'll close with the best crime novel I've read in recent months: David Goodis's The Wounded and the Slain (1955). A thumbnail description sounds formulaic to the point of offensiveness: trying to salvage their failing marriage, a couple vacations in Jamaica--but the husband drunkenly kills a man in the Kingston slums, and the repercussions force the pair to re-evaluate themselves and their relationship. Yet the book works. The man's struggles with alcoholism, guilt, and failure are believable and compelling, while his wife--despite some strikingly dated references to frigidity--by the novel's end has been presented as an independent actor, more than the equal of her husband in decisiveness and action. It's a nice reminder that while noir features more than its share of misogyny, it also is the source of some female characters who are far stronger than the men who surround them--and not all of them are femme fatales.

Anyone else putting The Black Lizard Big Book of Pulps on their Christmas list?
Posted by Levi Stahl at 9:58 PM