Catching a Tartar, or, An Encounter with Signor Gonorrhea 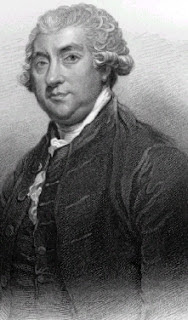 Having been enjoying the eighteenth century the past few days, I decided to prolong the fun by reading James Boswell's London Journal (1950). Begun when he was twenty and was living in London on his father's sufferance while attempting desultorily to secure a commission in the Guards, the journal is a carefully composed record of Boswell's daily activities. He is irresistibly good company: sincere, revealing to the point of self-deprecation, utterly unashamed, and always able to convince himself that his bad traits (ranging from lustfulness to idleness to misogyny to self-regard) are ultimately forgivable. All the while he demonstrates his sharp ear for the witty, amusing, or absurd in conversation that would lead him to be the perfect biographer for Dr. Johnson.

The period of the journal I read today covered the rise and fall of his amours in the winter of 1762-3 with the widow Mrs. Louisa Lewis, a lovely young actress, and they displayed all of what makes Boswell so compelling (and at times endearing) as a narrator of his life. Boswell initially endures a few months of coyness and playing--including a moment when, with relative delicacy, Louisa touches him for a couple of guineas. He comes through with the money, comforting himself with the thought that,

It cost me as much to be cured of what I contracted from a whore, and that ten guineas was but a moderate expense for women during the winter.

Throughout these months of cooing and petting, Boswell continually attempts to convince Louisa to allow him the "consummate bliss" of sleeping with her. He pushes; she pushes back. But each time, he makes a bit more progress, finally securing, on January 1, 1763, her promise to yield the next day when her landlady is out. On the 2nd, he writes:

[A]t three I hastened to my charmer.

Here a little speculation on the human mind may well come in. For here was I, a young man full of vigour and vivacity, the favourite lover of a handsome actress and going to enjoy the full possession of my warmest wishes. And yet melancholy threw a cloud over my mind. I could relish nothing. I felt dispirited and languid. I approached Louisa with a kind of an uneasy tremor. I sat down. I toyed with her. Yet I was not inspired by Venus. I felt rather a delicate sensation of love than a violent amorous inclination for her. I was very miserable. I thought myself feeble as a gallant, although I had experienced the reverse many a time. Louisa knew not my powers. She might imagine me impotent.

He need not have feared, for eventually,

I began to feel that I was still a man. I fanned the flame by pressing her alabaster breasts and kissing her delicious lips. I then barred the door of her dining-room, led her all fluttering into her bedchamber, and was just making a triumphal entry when we heard he landlady coming up. "O Fortune why did it happen thus?" would have been the exclamation of a Roman bard. We were stopped most suddenly and cruelly from the fruition of each other. She ran out and stopped the landlady from coming up.

Dejected, Boswell slinks off to church, consoling himself that at least he "saved my credit for prowess." He quickly arranges an assignation for the weekend at a hotel, but that, too, is not to be:

[Louisa] informed me that Saturday could not be the hoped-for time to bestow perfect felicity upon me. "Not," said she," that I have changed my mind. But it cannot be." In short, I understood that Nature's periodical effects on the human, or more properly female, constitution forbade it.

Even such a straightforward reason for delay sets Boswell to worrying again:

I was a little uneasy at this, though it could not be helped. It kept me longer anxious till my ability was known. I have, together with my vivacity and good-humour, a great anxiety of temper which often renders me uneasy. My grandfather had it in a very strong degree.

The next week, however, all goes as planned. His efforts meet with success--so much, in fact, that Louisa, impressed with his stamina, "declared me a prodigy, and asked me if this was not extraordinary for human nature."

Boswell doesn't get to enjoy his complacent self-satisfaction for long; less than a week later, he's beginning to worry that he might need those ten guineas after all:

I this day began to feel an unaccountable alarm of unexpected evil: a little heat in the members of my body sacred to Cupid, very like a symptom of that distemper with which Venus, when cross, takes it into her head to plague her votaries. But then I had run no risks. I had been with no woman but Louisa; and sure she could not have such a thing. Away then with such idle fears, such groundless, uneasy apprehensions!

The next day he writes,

I this morning feel stronger symptoms of the sad distemper, yet I was unwilling to imagine such a thing,

but later in the day he confesses to friends that he fears he's been given the clap:

They really sympathized, and yet they could not help smiling a little at my catching a tartar so very unexpectedly, when I imagined myself quite safe, and had been vaunting most heroically of my felicity in having the possession of a fine woman, to whom I ascribed so many endearing qualities that they really doubted of her existence.

When I got home, though, then came sorrow. Too, too plain was Signor Gonorrhea.

He visits his friend Douglas the surgeon, which leads to an amusing exchange wherein Boswell drops joking hints about a possible break on the price, which Douglas studiously pretends not to catch:

To these jokes he seemed to give little heed, but talked seriously in the way of business. And here let me make a just and true observation, which is that the same man as a friend and as a surgeon exhibits two very opposite characters.

Anyone who's read Casanova's memoirs (If you haven't, go do so! You won't regret it!) knows what comes next: a scene with the lady, wherein she denies any knowledge, followed by weeks of mercury and idle seclusion, the pains of which he alleviates by sending Louisa a rude, even cruel note demanding the repayment of his little loan. The note ends,

Call not that a misfortune which is the consequence of your own unworthiness. I desire no mean evasions. I want no letters. Send the money sealed up. I have nothing more to say to you.

Even Boswell realizes that the tone is too harsh, but he convinces himself that he is "only sacrificing at the shrine of Justice." Her return of the guineas a week later closes the episode by sending him into a typically self-regarding and entertaining path, begun in doubt but ending in confidence:

I felt a strange kind of mixed confusion. My tender heart relented. I thought I had acted too harshly to her. I imagined she might--perhaps--have been ignorant of her situation. I was so foolish as to think of returning her the money and writing her a letter of atonement. I have too much of what Shakespeare calls "the milk of human kindness." I mentioned the thing to [his friend] Dempster. He said it was just a piece of deep artifice in her. I resolved to think no more on the matter, and was glad that I had come off two guineas better than I expected.

So now the question is: should I tackle the Life of Johnson? I do love Johnson, and I'm clearly a fan of Boswell's style. The only thing stopping me is the length. Anyone read it and want to weigh in?
Posted by Levi Stahl at 9:08 PM