Consigned to the Flames I: Emperor Shi Huang Ti

Under my belt for the long weekend trip to my grandparents from which I've just returned:

Thus I have no time for a proper post tonight.

Instead, I'll inaugurate a New Feature! (Oh, for blinking, scrolling, multi-colored, music-playing text there! Oh, World Wide Web of the early aughts, how I miss thee! Oh, Henry Fielding, how you infect and deform my prose!)

This feature will recur every time I come across an account of an author burning any sort of written work: unfinished novels, letters, diaries, notebooks, etc. Though other forms of destruction--particularly, say, by tiger--may be in themselves interesting, I will only include destructive acts that involved fire. If a form of destruction is unspecified, I will assume fire to have been employed, fire being, the evidence of paper-rock-scissors aside, the natural enemy of paper.

Because the Internets are by their nature totalizing, I will set no other boundaries and anticipate no other limits to this series: I will instead pretend that the series will one day encompass every instance of authorial immolation. Limits can therefore be set only by authors themselves deciding to disregard their fears of a potentially prurient posterity and eschew the temptations of the torch.

I'll begin by already stretching the minimal boundaries I've just now set out; you'll please simply disregard those for today. Think of this as an establishing shot. Zippos to the ready. 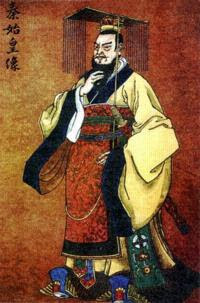 From "The Wall and the Books," by Jorge Luis Borges, collected in Selected Non-fictions (1999), Eliot Weinberger, editor:

I read, a few days ago, that the man who ordered the building of the almost infinite Chinese Wall was that first Emperor, Shi Huang Ti, who also decreed the burning of all the books that had been written before his time. That these two vast undertakings--the five or six hundred leagues of stone against the barbarians, and the rigorous abolition of history, that is, of the past--were the work of the same person and were, in a sense, his attributes, inexplicably satisfied and, at the same time, disturbed me. . . . Perhaps hi Huang Ti walled his empire because he knew that it was fragile, and destroyed the books because he knew that they were sacred books, books that teach what the whole universe teaches or the conscience of every man. Perhaps the burning of the libraries and the building of the wall are acts that in some secret way erase each other.