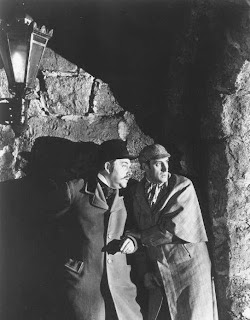 When Stacey and I travel by car, we read Sherlock Holmes aloud during the drive. One story on the way there, and one on the way back. When packing, I sometimes wonder whether it's worth lugging the large hardcover of The New Annotated Sherlock Holmes rather than a more manageable paperback. It's the same stories, after all, and since you can't really enjoy the illustrations while driving, all you gain are the notes, written from a Sherlockian perspective--the Sherlockians being the branch of fans that treats the Holmes stories as history rather than fiction. Today I was reminded why it's always worth the extra weight.

The reminder took the form of an editorial note near the end of "The Speckled Band." (If you've not read the story and would like to avoid learning about its solution, you should immediately go somewhere else--perhaps here--instead of continuing to read). One of the most popular Sherlock Holmes stories, "The Speckled Band" is also one that has over the years generated some questions among Sherlockians about its solution, in no small part because of some minor questions about the details of the case. (How could the adder live in the safe if there were not ventilation holes? Why would the Doctor whistle to recall the snake when it hadn't had time to perform its murderous duty? etc.) The note rounding up all these alternative theories--note #44 for this story--convinced me that this edition is worth lugging to the ends of the earth; even if you're not a Holmes fan, you might find it worth your time to read through to the end.

44There are some revisionist theories respecting "The Speckled Band." Several argue that Helen Stoner murdered Julius and Dr. Roylott, and probably her mother as well. Vivian Darkbloom, in the self-described "somewhat revisionist" essay "Holmes Is Where the Heart Is, or Tooth-Tooth, Tooties," suggests that Holmes murdered Dr. Roylott, to clear the way for an illicit liaison with Helen Stoner. Roylott's behaviour, the essay contends, was not that of a murderer, but of a man attempting to scare off a suitor. The essay appeared in the December 1976 issue of the Sherlockian journal Baker Street Miscellanea, and the editors reported that "the anagramatically pseudonymous Vivian Darkbloom has not seen fit to furnish us with any personal data, and consdering the scandalously icononclastic thrust of her principal thesis, we are not surprised. The author appears to be California-based, also engaged in medical studies, and a student of the works of Vladimir Nabokov as well as John H. Watson's . . . " A character named "Vivian Darkbloom" appeared in Stanley Kubrick's 1961 film adaptation of Nabokov's Lolita, for which Vladimir Nabokov wrote the screenplay, and in "Vladimir Nabokov: In Tribute to Sherlock Holmes," Andrew Page analyses references and images in Nabokov's Lolita,The Defense, Pnin, The Real Life of Sebastian Knight, Despair, and Pale Fire that demonstrate the author's familiarity with and affection for the Canon.

Now, perhaps more serious fans of Nabokov than I already knew about this revisionist theory--and, granted, it's not even certain that the article is by Nabokov--but I didn't know about it, and it made my day. Of course Nabokov is a Holmes fan, and of course he would have enjoyed sitting around thinking up alternate solutions to Holmes's cases! 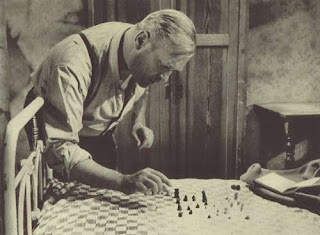 His solution to this particular case is, you'll note, insane.

I don't think it's VN's handiwork—I don't think he'd be so obvious as to offer that "Vivian Darkbloom"—an anagram he's dropped into several of his novels—was a fan of Nabokov...i.e., of himself!

That seems likely. Even the title of the article seems a bit too blunt an instrument for Nabokov. I think my critical sense was overwhelmed by my joy at immediately recognizing the Vivian Darkbloom anagram--that, and my fervent desire to imagine Nabokov scribbling out articles for Sherlockian publications under pseudonyms! A Holmes fan can dream, can he not?]
Posted by Levi Stahl at 11:18 PM