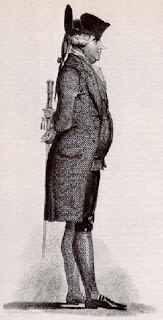 {James Boswell, engraving by E. Finden after a sketch by George Langton.}

I wrote briefly yesterday about James Boswell's genius for self-promotion. The following passage in Adam Sisman's Boswell's Presumptuous Task will give you a good idea of his skill--and shamelessness--in that arena. Following legal studies in Utrecht, Boswell set out on a European tour, in the course of which he befriended Rousseau and Voltaire, and which closed with a visit to Corsica, an island whose recent overthrow of its Genoese rulers, followed by its annexation by France, had caught the English imagination. While on the island, Boswell met and befriended the deposed Corsican ruler, General Pasquale Paoli--who initially though Boswell was a spy because of his note-taking. That suspicion must have planted an idea, for

As [Boswell] made his way back through Europe, he sent a series of unsigned letters to an English newspaper. These anonymous letters, a skilful blend of fact and fantasy purporting to come from a correspondent with insider intelligence, suggested that Boswell's visit to Corsica might have profound consequences. Corsica was described as being of strategic importance to Great Britain; Boswell, they hinted, was more than a tourist; he was in fact on a secret mission. The letters alluded to clandestine negotiations, concealed papers, and diplomatic intrigues. The Genoese were said to be seriously alarmed by Boswell's activities. One letter even suggested that he had gone to the island to explore the romantic possibility of establishing the Stuart line on the throne of Corsica (a rumour which rendered [Boswell's father] Lord Auchinleck apoplectic.) This was all nonsense, of course, but it was effective in whipping up public sympathy for the cause of Corsican independence. It also served to publicize the book about his travels which Boswell planned to write. Boswell was pleased to portray himself as a man of both mystery and importance.

Boswell's subterfuge worked: his Account of Corsica (1768) sold out three printings and was translated into four other languages, while Boswell himself became a celebrity, accosted by strangers wanting to meet "Corsican Boswell."

While Boswell's actions in sending the letters, though brazen, are understandable (and really not that different from contemporary viral marketing), another component of his Corsican adventures, described well by Sisman, provides a better example of the combination of self-importance, vainglory, and absurdity that make Boswell such an irresistible figure:

Boswell decided he should share his Corsican expertise. He sought an interview with [former Prime Minister William] Pitt, still an influential figure in Parliament though he had been out of office since 1761. Pitt replied to Boswell's request by suggesting that a meeting with the current Secretary of State might be more effective. But Boswell would not be denied: the opportunity to appeal personally to the Friend of Liberty was irresistible. He was ushered into the statesman's presence dressed as a native Corsican chief, armed with stiletto and Paoli's pistols in his belt, and wearing a cap complete with a tuft of cock's feathers. It was a ludicrous display--though perhaps no more ludicrous than Byron dressing in Greek costume half a century later. Pitt received Boswell politely enough. Later Boswell appeared at Garrick's spectacular Shakespeare Jubilee in Stratford-upon-Avon wearing the same outfit.

Were I as self-dramatizing as Boswell, I'd explain now that I'll be away from the blog for a few days on a secret mission; since I'm not, however, I'll admit that it's just a visit to my grandparents. I'll leave you with a recommendation, a question, and a note of thanks.

The Question
Boswell wasn't really a spy, but there have been quite a few English writers through the years who were. Kit Marlowe (maybe), Graham Greene, and Ian Fleming come immediately to mind. But who else?

The Note of Thanks
Saturday marks the end of the second year of I've Been Reading Lately. Three hundred-forty-five posts and I'm still enjoying it. I hope you are, too. Thanks for reading.
Posted by Levi Stahl at 8:52 PM