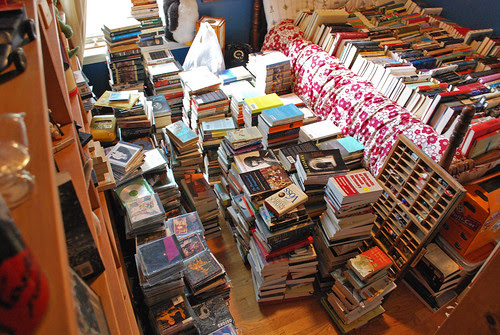 Being not much of a joiner, I generally fail to participate in online memes and list-making, but one that was passed on by Terry Teachout and CAAF of About Last Night earlier this week was impossible to resist:

Rules: Don't take too long to think about it. Fifteen books you've read that will always stick with you. First fifteen you can recall in no more than fifteen minutes.

Below is the list I came up with; I've added a link to those about which I've written before on this blog.

Some that nearly made the cut, and on a different day might have done so:

I don't know that my list, even in its expanded version, tells you much about me; perhaps merely that my taste, though definitely biased towards the English, is fairly catholic, varying wildly depending on mood and circumstance.

Do take a look at CAAF's list (with which I have no titles in common) and Terry's list (with which I share three), both of which feature books worth recalling. Other lists worth checking out that I've come across so far are those of Patrick Kurp of Anecdotal Evidence (who eschews the term "meme," choosing instead the more pleasant and apt "literary parlor game"), who shares my fondness for Boswell and reminds me that Joseph Mitchell really ought to have found a place, and D. G. Myers, with whose list mine overlaps not a whit--though the titles I've read on his list are nonetheless favorites, which makes me think I ought to investigate the rest as well.

And yours, dear reader?
Posted by Levi Stahl at 7:01 PM