"This quietest figure in literature," or, Back under Hardy's spell 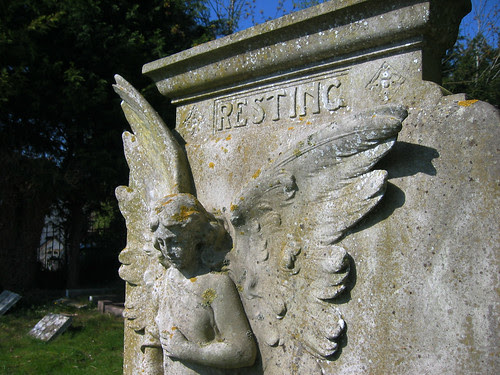 {Photo of a grave in Dorset by rocketlass.}

The problem with happening across a reference to Thomas Hardy, like the one that inspired my previous post, is that no sooner have I consulted my favorite sources on Hardy's life than I find myself weltered by their countless worthy anecdotes--and in a blink, a week of planned posts go by the wayside. Interested in learning more about the delicious Penguin Book of Gaslight Crime? Charles Ardai's fun new swashbuckling adventure series starring Gabriel Hunt? The jeweled viciousness of Randall Jarrell's Pictures from an Institution? Sorry, but you'll have to wait while I give Hardy his due.

For this first anecdote, at least, I can claim the excuse of continuity, as it does feature characters who figured in the previous post: not just Hardy, but also J. M. Barrie and Cynthia Asquith, the daughter-in-law of H. H. Asquith, the prime minister whose threat to ennoble Hardy and Barrie (alongside 498 others) so frightened the House of Lords in 1911. And surely not even the most hardened anti-Hardyite could begrudge me the sharing of a tale like this, from a 1956 article in the Listener by Cynthia Asquith, who at the time of this 1921 visit was Barrie's secretary:

I have such a vivid visual memory of Thomas Hardy. I see him on the threshold of the cottage in which he had been born. He is anxiously watching his friend, J. M. Barrie, climb a rickety ladder to get in through a window and open the locked door of the cottage from the inside, when Barrie was sixty-one years old.

Shades of Peter Pan there, no?

After a few dismissive comments about the architecture of Max Gate, typical of educated visitors to that odd abode that Hardy had designed for himself, Asquith remarks on Hardy's

resigned eyes, unforgettable. They looked as if nothing could ever surprise them again. They were sad eyes--very sad--but unflinching, as though, after long sorrow, a certain serenity had been arrived at.

The best part, though, comes with the appearance of Hardy's dog, Wessex:

The moment we arrived I was formally introduced to the most despotic dog guests had ever suffered under. This notorious dog, who was called "Wessex," had, I am sure, the longest biting list of any domestic pet. His proud master lost no time in telling us that the postman, who had been bitten three times, now refused to deliver any more letters at the door. The thick tousle of Wessex's unbrushed coat made it impossible to guess to which, if any, breed he was supposed to belong, and I did not think it would be civil to ask. Wessex was specially uninhibited at dinner time, most of which he spent not under, but on, the table, walking about unchecked, and contesting every single forkful of food on its way from my plate to my mouth.

Or perhaps (maybe for those of you who harbor unruly dogs of your own?) the most memorable--and undeniably the most telling--part of the article is Asquith's account of one of Hardy's morbidly self-obsessed quirks that Barrie had shared with her:

[H]e often smiled over Hardy's preoccupation with his plans for his own burial--plans which were perpetually being changed. "One day," said Barrie," Hardy took me to see the place where he wants most to be buried, and the next day he took me to see the place where he would like next best to be buried. Usually he says he is to be buried exactly in between his two wives, but sometimes he is to be so many inches hnearer to the first; sometimes so many inches nearer to the second."

If you suspect a little friendly exaggeration in Barrie's account, you're not alone: that was Asquith's response, too, until

the present Mrs Hardy, a little wearily, if unresentfully, told me that her husband had one day made her walk six miles to show her the bench on which he used to sit while he was courting her predecessor. I wondered, but did not like to ask, whether he kept her up to date with his changing arrangements for her burial.

Longtime readers will already have guessed that I found this article in Thomas Hardy Remembered (2007), a compilation of contemporary accounts of Hardy so full of pleasures that I can't imagine a Hardy fan's bookshelves being complete without it, despite its libraries-only price of £57.00. If you're not yet convinced, just wait: as threatened, I'll share more from it in the coming days.

{And after all this talk of Wessex and burial, I must direct you to this photo by Flickr user Grueneman--which, its rights being sadly reserved, I can't reproduce here--of Wessex's grave in Hardy's pet cemetery. He truly was an honored friend, for all his incorrigibility.}
Posted by Levi Stahl at 8:14 PM