The Waugh Family Guide to Fatherhood 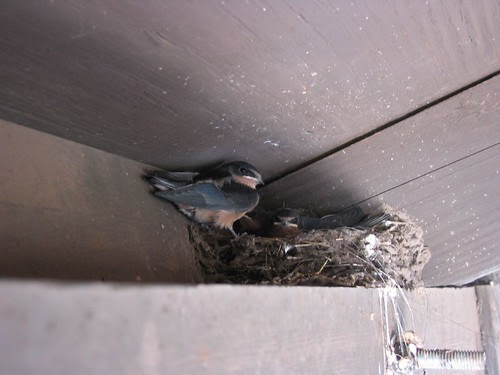 I give up. It's turning out to be Evelyn Waugh week after all. (But I promise this is the end of it! Think of this as Sunday morning of Evelyn Waugh week: struggle through this one last sermon and it's all over.)

Today is for those of you who have, or are considering having, children. I, childless and with nary a glimmer of the desire to pass on my genes, can read Alexander Waugh's Fathers and Sons: The Autobiography of a Family (2004) as sheer entertainment. I can enjoy the bizarre anecdotes--occasionally flinching at the worst of them--while gaining insight into one of my favorite writers and one of England's most illustrious literary families. Parents, however, can employ the book for a wholly different--and far more important--purpose: they can read it in order to learn how not to raise their children!

The Waughs, it seems, have for generations raised their children in such a way that the casual reader--one who, say, having seen nature films of birds vomiting in the screeching beaks of their offspring or polar bears teaching their children how to kill, vaguely imagines that parents are driven by natural forces to care for and about their young--will regularly find himself staring gapemouthed at the page, wondering just where English eccentricity shades over into . . . well, best to let Evelyn's father tell it:

When the word "sadist" was first explained to Arthur he is reported to have nodded in recognition: "Ah, that is what my father must have been."

Now, to be fair to the later Waughs, Arthur's father, Alexander, was by far the worst of the batch. His sobriquet, "The Brute," was no accident:

The Brute's solution to his elder son's faiblesses was to enroll him on a toughen-you-up induction course based on the old-fashioned wisdom: "'Tis fear as makes 'em brave." To this end he forced his son to cling for his life to farm gates as he swung them violently back and forth, shouting, "Hold on, m'boy." He perched him on high branches, deserting him there for hours on end, and then would creep up behind him, blasting off both barrels of his gun just inches from his ear--all this to fortify Arthur's character and to teach him about surprises.

If the Brute's abuse is enough to make one question whether there is such a thing as innate filial sentiment, the fact that Arthur never even seems to have considered murdering the monstrous shit may provide a countervailing example. In fact, considering his upbringing, Arthur turned out surprisingly well--though still, admittedly, leaving a bit to be desired as a father. As I noted the other day, his involvement with the life of his eldest son, Alec, was intense to the point of obsession, while he essentially ignored his younger son, Evelyn. Sometimes his decisions seem bizarrely cruel:

When Evelyn asked for a bicycle in April 1914 . . . he went off and bought a bigger and better one for Alec, and gave Evelyn a small box of theatrical facepaint instead.

Strangely enough, the result of the stifling closeness to Alec and the general dismissal of Evelyn seems to have been relatively similar: neither man wanted to have all that much to do with his children. Alec, however, was by far the worse offender in that regard, spending nearly his whole life apart from them. In his autobiography he wrote, regarding his return from six years on active service during the war:

My conventional civic duty was clearly to devote my energies to my family, to reforging links with them, to planning for their future, to making amends for the six years' separation. That was my civic duty. Yes, I know, I know. I had been six years away from my family, but I had also been six years away from my desk. I put the claims of my writing first. Time was running out. I had to make the most of the time still left.

Evelyn, on the other hand, was around his children quite a bit, though as his grandson Alexander explains,

He did his best to entertain them but he was never strong enough to keep up the effort for long--he put too much in and felt he got too little out--so that by the end of each school holiday no on was happier than he to see them return to school.

From Alexander's account one gets the sense that it wasn't his kids specifically that Evelyn objected to, but the whole species. He wrote to his friend Lady Diana Cooper that,

I abhor their company because I can only regard children as defective adults. I hate their physical ineptitude, find their jokes flat and monotonous.

He also apparently treated Lady Diana to the following gruesomely funny scenario, telling her that:

"[F]or choice he would take his six children to church at Easter, see them shriven and annealed and, at the church door, slaughter the lot in their innocence and absolution."

"But what about you, Evelyn?" Diana asked him.

"O, I would repent at leisure and be forgiven."

As Evelyn was one of the great satirists of the age, rarely writing anything that didn't betray a glint of cruel steel, it's not difficult to dismiss such sentiments as playing. But the exchange does add a gruesomely personal cast to Brenda Last's callous acceptance of the death of her son in A Handful of Dust. At the very least it seems true that Evelyn was no more comfortable in the presence of his children than he was in the company of adults he actively disliked.

Yet over the years at least some of Evelyn's children seemed to develop a real affection for him--especially Alexander's father, Auberon, despite Evelyn's describing him to Nancy Mitford as a bore (even though "I have tried him drunk and I have tried him sober"). Alexander recounts a tale from his uncle Septimus that is almost touching, in which the child Septimus demonstrates more understanding--and certainly more compassion--than customarily evinced by Evelyn the adult:

Septimus told me that Evelyn, fed up with his sighing, had said to him, "If I hear you sigh one more time I shall kick you." When th next sigh fell on the silent air Evelyn duly leaped to his feet: "Right, I am now going to kick you." Septimus set off round the kitchen table with his father in sweaty pursuit. After a couple of circumnavigations he realised that something was wrong. "This is ridiculous," he thought. "I could carry on running round this table all day. Papa is far too fat and slow to catch me ever." Out of mixed feelings of guilt, compassion, and shame, Septimus stopped running to allow his father to catch up and kick him.

Despite all of this bad heritage Auberon (and quite possibly his siblings, whose adult lives mostly go unnoted in Alexander's book) somehow, it seems, became a pretty good father--perhaps a bit hands-off and reticent for the modern taste, but supportive and caring. And Alexander, the father of three children, seems at the very least to have a healthier attitude towards his own relationship with his children than one often sees on the more hotly contested playgrounds of the contemporary urban paradise:

We are all bored by our children on occasion and the world might be an easier place if we were only frank enough to admit it, but modern parents tend instead to furrow their brows, force smiles onto anxious lips and talk down in sentimental goo-goo voices that sometimes stick even after their children have grown up. This, I believe, is the way to damage children.

Ah, but if goo-gooing is the way to damage children, what is the way to raise them properly? Well, though my childlessness may justifiably lead you to discount this prescription, I would argue for happy songs, hugs, regular readings from Good Night, Gorilla--and, just to be sure things don't get too saccharine, a copy of A Handful of Dust held back for the later teenage years.
Posted by Levi Stahl at 5:10 PM