The Members of the Waugh Family 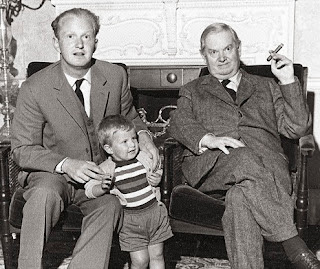 At the risk of unintentionally turning this into Evelyn Waugh Week . . . and at the further risk of permanently alienating whatever small portion of my small readership has any taste or good sense . . . . I think I have to--I see no other course but to--write about some of the members of the Waugh family's . . . members.

See, despite Alexander Waugh's acknowledgment of the problematic nature of familial nudity--

I never saw my father's bare arse or his exposed genitals and am glad of that, as a glance at either might have traumatised me for life

--his Fathers and Sons: The Autobiography of a Family (2004) is chock full of, if not descriptions of, then at least information about, Waugh family units.

A blogger with a sense of decency would pass over those moments in this heartfelt and amusing book in silence, or at most would dignify them with a quiet "Harrumph" or two. But decency be damned--they're too horridly entertaining to ignore!

Take, for example, this demonstration of the unintended consequences of punishment, from the schooldays of Alexander's great-uncle Alec Waugh:

Surely Alexander's grandfather Evelyn would have appreciated that nicely chosen "worked out," with its whiff of remembered furtive experimentation. For his own part, Evelyn later wrote to a friend that he was "reading all the case studies in Havelock Ellis and frigging too much."

Then there's the official horror provoked by the discovery of such illicit activity. The headmaster wrote to Alec's father, Arthur, and Arthur--whose involvement with the details of Alec's youth, at this distance in years, appears obsessive to the point of creepiness--dispatched a lengthy, moralizing letter to his son, in the midst of which is this howler of a paragraph:

And something more. The man who is addicted to self-abuse generally becomes the father of feeble and rickety children, even if he is not incapable of being a parent at all. It is an awful thought that someday you might take to a pure girl's arms a body that will avenge its own indulgences upon children yet unborn. It is a deadly thought. It must be prevented at all costs.

The modernity that is rooted so deeply in us reflexively argues that such a relentlessness quest to stamp out sexual expression inevitably will lead to its emergence elsewhere, in some murkier, possibly damaged form. In that vein, take note of the drawing that Alec's 8-year-old brother Evelyn commits to his diary to commemorate his appendicitis operation, which was "performed with chloroform on the kitchen table":

It shows a jubilant doctor waving scissors and a knife in the air as Evelyn is held down by his mother. Another figure (probably Arthur) bangs a chisel into his son's penis.

I don't think one has to be steeped in Freud to raise an eyebrow at that. (This takes us off the topic a bit, but I can't resist: after the operation, Waugh was bedridden for a week, and he was too weak to stand when released. Arthur

sent him to a vacated girls' school to recuperate where they forced him to undergo electric-shock and cold-water treatments.

Evelyn Waugh was a complicated, frequently unpleasant man, and his cranky awkwardness can't entirely be blamed on his bizarre childhood--but it clearly gave him a solid shove on his way.)

I'll skip over Arthur's hiring of a young woman to give him buttock massages in his old age--because it's too grotesque to contemplate--and instead move up a generation, which offers me a chance to give the memberless members of the Waugh family their nude due. (Which, clothed or not, Alexander doesn't do much of in this volume: until recently only the Waugh men wrote, so only the Waugh men get written about.) Alexander speculates whether,

in my own father's case, if his erotic sensibilities were not slightly impaired by the seminal shock of seeing (aged three) his nonagenarian step-great-great-grandmother naked in her bath. Her name was Grace Wemyss: she was his mother's mother's stepmother. "How beautiful you are looking today, Granny Grace," he is said to have said. Evelyn, oblivious to the psychological damage this grotesque spectacle might have inflicted upon his little boy, wrote proudly in his diary: "Auberon surprised her in her bath and is thus one of the very few men who can claim to have seen his great-great-grandmother in the raw."

If any of you are members of that exclusive club, I don't want to know!
Posted by Levi Stahl at 9:30 PM