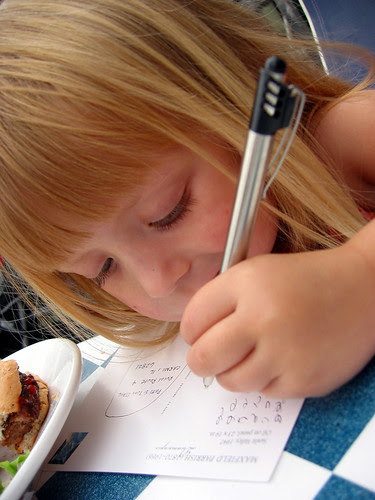 {Photo by rocketlass of our niece writing postcards.}

Lest you get the wrong impression from my post the other night in which I quoted Virginia Woolf writing that "the Victorian age killed the art of letter writing with kindness," I thought I should tonight state very clearly my firmly held belief that there can never be too many letters! Never! I want the letters of all my favorite authors published in multiple, handsome volumes! With rich annotations! And while we're at it, let's make them fully searchable on the Internet!

That said, a volume of selected letters is a splendid thing as well, and in a just world great glory would accrue to those patient scholars who winnow down the corpus of correspondence to meet the requirements of both the marketplace and bookbinding technology. Tempting though some of the complete sets may be--I'm looking at you, Lord Byron--a stack of Selecteds around one's laptop exudes a powerful joy of its own, because by dipping in almost at random, one can pluck such gems as this, from a letter Gustave Flaubert sent to Louise Colet on Easter of 1853:

The impression that my travel notes made upon you has prompted me, dear Muse, into strange reflections on the hearts of men and women. Decidedly, they are not the same, whatever people say.

On our side there is candour, if not delicacy; we are in the wrong even so, for this candour is a kind of hard-heartedness. If I had omitted my impressions of women, then you would not have found anything to cause you distress! Women keep everything to themselves. They never confide in your unequivocally. The most they can manage is to set you guessing, and, when they tell you things, it comes with such quantities of sauce that the meat disappears beneath it. But if we allow ourselves two or three delinquent little ejaculations, even though our hearts are not really in it, they start moaning and groaning!

Or this, from a letter Barbara Pym sent to Philip Larkin on September 14, 1964:

Our library has been made slightly more interesting--in a macabre way--by a rather peculiar young man joining the staff. He doesn't come in till 10:35 most mornings and is given to cryptic utterances which one can only half hear. I don't have much to do with him myself but hear all this from the other staff. I find it is pleasanter to observe these things rather than actually participate in them.

As a nod to friends who have recently wrestled with book proofs, I'll pass along this opening to a letter sent by the aforementioned Lord Byron to his publisher John Murray:

Dear Sir--I have received & return by this post under cover--the first proof of "Don Juan."--Before the second can arrive it is probably that I may have left Venice--and the length of my absence is so uncertain--that you had better proceed to the publication without boring me with more proofs--I sent by the last post an addition--and a new copy of "Julia's letter," perceiving or supposing the former one in Winter did not arrive.--Mr. Hobhouse is at it again about indelicacy--there is no indelicacy--if he wants that, let him read Swift--his great Idol--but his imagination must be a dunghill with a Viper's nest in the middle--to engender such a supposition about this poem.--For my part I think you are all crazed.

The next time a deadline looms, you might consider seeing if you can put over that closing line.

Staying with the publishing theme, here's Jessica Mitford, getting right to the point in a letter to a literary agent friend in 1990:

Thanks SO much for yr letter, what a pleasure to get it. PUBLISHING: Too ghastly here, too, as I'm sure you know.

Here's a more circumspect passage from a letter E. B. White sent his editor on May 24, 1952, after first seeing the jacket design for Charlotte's Web:

Thanks for the dummy cuts and the jacket design. I like everything. The group on the jacket is charming. My only complaint is that the goose looks, for some reason, a bit snakelike. Perhaps this is because its beak is open, or perhaps because the eye is round like a snake's. You sound so rushed that I presume you don't want to make any revisions, and I would be satisfied have the jacket go as is, if it seems right to you. But no goose-lover in this house is satisfied.

The web effect is OK for the purposes of jacket design but that type of rather mussy Charles Addams attic web is not right for the illustrations. I'm sure that Garth realizes that. Charlotte weaves quite an orderly, symmetrical web.

Closing this batch of publishing correspondence is Herman Melville, who, in writing to his editor about Moby-Dick, not unsurprisingly brings the spooky:

It is the horrible texture of a fabric that should be woven of ship's cables and hawsers. A Polar wind blows through it, and birds of prey hover over it.

I've only just begun to flip through the new collection of Noel Coward's letters, but I've already found great pleasures, like this installment, sent from New Jersey in November of 1926, of his weekly letters to his doting mother:

The play, dear, has all the earmarks of being a failure! Gladys and Jack and I sat grandly in a box on the First Night and watched it falling flatter and flatter. And I must admit we got bad giggles! They were all expecting something very dirty indeed after the English Censor banning it and they were bitterly disappointed.

Francine Larrimore was very good an A. E. Matthews, too, tho' he forgot most of his lines.

Speaking of parenting, Lord Chesterfield's cynical letters to his son always reward a browse; here's an entertaining bit from a particularly long one, sent on January 8, 1750:

There are people who indulge themselves in a sort of lying, which they reckon innocent, and which in one sense is so; for it hurts nobody but themselves. This sort of lying is the spurious offspring of vanity, begotten upon folly: these people deal in the marvellous; they have seen some things that never existed; they have seen other things which they never really saw, though they did exist, only because they were thought worth seeing. Has anything remarkable been said or done in any place, or in any company, they immediately present and declare themselves eye or ear witnesses of it. They have done feats themselves, unattempted, or at least unperformed by others. Thy are always the heroes of their own fables; and think that they gain consideration, or at least present attention, by it. Whereas, in truth, all they get is ridicule and contempt, not without a good degree of distrust: for one must naturally conclude, that he who will tell any lie from idle vanity, will not scruple telling a greater for interest. Had I really seen anything so very extraordinary as to be almost incredible, I would keep it to myself, rather than by telling it give anybody room to doubt, for one minute, of my veracity.

Note that Lord Chesterfield, as is his wont, is not objecting to lying, per se, but to lying for no reason.

I'll close with some top-shelf cruel wit, from some masters of the art. First, a few lines from Nancy Mitford, writing from Paris to Evelyn Waugh on August 20, 1952:

Here we are obsessed by the fate of Sire Jacques Drumont, an English millionaire who has been murdered with his wife & small child while camping out. Though all are very sorry for Sire Jacques, & Lady Ann his wife, it is rather hoped that this will cure English millionaires of their mania for camping, they are a bore & start forest fires everywhere.

Finally, there's this comment from Waugh to Mitford from April 8, 1951:

Everyone I met in London was in debt & despair & either much too fat or much too thin.

Note to today's writers: put down those iPhones and write more letters! I'll want to read them when you're dead and I'm old!
Posted by Levi Stahl at 9:39 PM