If only I'da known! 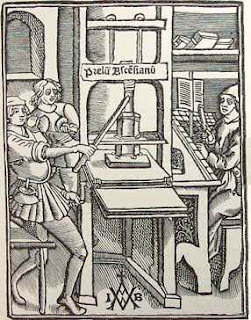 One of the advantages the internets have over print media is the ease with which they allow for the addition of postscripts after publication--which is good, because one of the consequences of spending a lot of time reading and a lot of time writing about that reading is that the two don't always match up just right: frequently I learn something new and interesting about a topic long after I've hit the Publish Post button.

But whereas print media would leave me with little recourse, with a blog all I have to do is spend a few minutes typing and tagging my new discoveries, and presto!--my account, however incomplete or questionable it may remain, is instantly more rich and expansive.

Here, for example, are three things I came across today alone that I wish I'd known a while back.

1 If, last night when I was writing about Steven Millhauser, I had already begun reading Robert Musil's The Man Without Qualities (1930), I would have used this passage to help explain Millhauser's work:

To pass freely through open doors, it is necessary to respect the fact that they have solid frames. This principle, by which the old professor had always lived, is simply a requisite of the sense of reality. But if there is a sense of reality, and no one will doubt that it has its justification for existing, then there must also be something we can call a sense of possibility.

Whoever has it does not say, for instance: Here this or that has happened, will happen, must happen; but he invents: Here this or that might, could, or ought to happen. If he is told that something is the way it is, he will think: Well, it could probably just as well be otherwise. So the sense of possibility could be defined outright as the ability to conceive of everything there might be just as well, and to attach no more importance to what is than to what is not. The consequence of so creative a disposition can be remarkable, and may, regrettably, often make what people admire seem wrong, and what is taboo permissible, or, also, make both a matter of indifference. Such possibilists are said to inhabit a more delicate medium, a hazy medium of mist, fantasy, daydreams, and the subjunctive mood. Children who show this tendency are dealt with firmly and warned that such persons are cranks, dreamers, weaklings, know-it-alls, or troublemakers.

Not, mind you, that I think Musil and Millhauser are necessarily all that congenial--I imagine Musil would casually dismiss Millhauser as far too playful--but the passage nevertheless serves well as a description of Millhauser's method.

2 If, two weeks ago when I was writing about the joy of reading collections of letters, I had remembered this scene from Ivy Compton-Burnett's Manservant and Maidservant (1937), I would have surely have used it to open my post:

"People do like to read letters," said Marcus, "especially those that are written to someone else."

"They do that sometimes when they are not supposed to," said Tamasin. "They must like it very much."

3 Finally, if, when I wrote about Ring Lardner back in the fall, I had already read Elizabeth Hardwick's brief essay about him, I would have drawn on it for this:

Out of a daily struggle to make a living by literary work of various kinds, Lardner produced many short stories and some longer works of great originality. These stories were also immensely popular and nothing touches us more than this rare happening. In a country like ours where there will necessarily be so much journalism, so much support of the popular, the successful, we are complacently grateful when we find the genuine among the acceptable.

And I probably wouldn't have been able to resist including this as well:

Vanity, greed, and cruel humor are the themes of Lardner's stories. The lack of self-knowledge is made up for by a dizzy readiness with cheap alibis. No group or class seems better than another; there is a democracy of cheapness and shallowness. Lies are at the core of nearly every character he produces for us. The only fear is being caught out, exposed to the truth. love cannot exist because the moment it runs into trouble the people lie about their former feelings. Because of the habit of lying, it is a world without common sense. The tortured characters are not always victims. They may be ruined and made fun of, but they have the last word. They bite the leg that kicks them.

And what, tomorrow, will I wish I had known today? Well, that's one of the reasons we keep reading, isn't it?
Posted by Levi Stahl at 10:25 PM