"Some great truth stands before the door of his life." 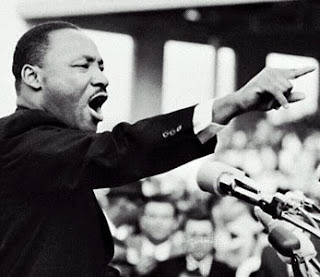 King delivered a tribute to Sunday's march. He mingled an apology for missing it with a reminder of the travails that buffeted him, too, quoting poet Langston Hughes ("Life for me ain't been no crystal stair"), and vowing that the threat of death could not stop them now. "If a man is 36 years old, as I happen to be," he said," and some great truth stands before the door of his life . . . and he refuses to stand up because he wants to live a little longer and he's afraid that his home will get bombed or he's afraid that he will lose his job, he's afraid that he will get shot or beaten down by State Troopers, he may go on and live until he's 80, but he's just as dead at 36 as he would be at 80. And the state of breathing in his life is merely the announcement of an earlier death of the spirit."

For the third straight year, I'm spending Martin Luther King Jr. Day reading Taylor Branch's history of King and the Civil Rights movement. Previous volumes tracked the genesis of the movement and its quick spread, and Branch displayed remarkable skill in marshaling disparate sources to present the multifaceted movement--from the SCLC to SNCC to the Freedom Riders to unplanned individual actions--without simplifying or reducing the story to just King and some hangers-on. In this third and final volume, the movement works to consolidate the gains that led to the 1964 Civil Act while continuing to pursue actual change--such as voter registration--in the still violently resistant South. Vietnam complicates the story as well, as Lyndon Johnson reluctantly (and at first secretly) ramps up American involvement despite being advised that there's little hope of victory, while King quickly comes to view protests against the war as a natural extension of his nonviolent ethos.

It would be hard to overpraise Branch's portrayal of all these events. He's as good with the large effect and the major players--Johnson privately browbeating George Wallace, for example, or King's deliberations with his inner circle--as with the small moment, such as the following one, from the days before the 1965 march from Selma to Montgomery. As King addressed a crowd in a Selma church, he was informed that a judge had just authorized them to march to the courthouse, a march that in previous days had been greeted by officially sanctioned violence. Archbishop Iakovos of the Greek Orthodox church, who had just arrived in Selma to support the movement, found himself unexpectedly swept up by the crowd into the instantly formed march as grown men cried in wonder:

Iakovos wore a frozen look. A small Negro girl took him by the hand and said not to worry.

The most dramatic moments--such as the violent suppression of the first attempt to march to Montgomery and the ultimately successful later march--are as gripping as any novel, serving to demonstrate the astonishing courage of all those, so many of them just ordinary citizens, who put their lives on the line for the cause.

A couple of weeks ago, Hillary Clinton caught flak for criticizing Barack Obama's rhetoric by saying, "Dr. King’s dream began to be realized when President Johnson passed the Civil Rights Act. It took a president to get it done.” While Clinton definitely could have expressed herself on this topic with more care (and in addition deserves heaping opprobrium for allowing her surrogates to spend a week tossing out poorly veiled racist comments), reading Branch makes clear what she was trying to say. It doesn't lessen the bravery or vision or sacrifice of King--or his co-leaders and co-marchers--to admit that without the support of his sometime ally, sometime antagonist Johnson, the movement would have faced a far greater challenge. When Johnson responded to the violence in Selma with a nationally televised speech calling voting rights fundamental (in language consciously adapted from King), he was committing himself to a truer vision of justice not yet fully shared by all Americans--and he immediately began putting that vision into practice through the Justice Department.

That commitment and its execution weren't perfect, and the risks that Johnson and his staff ran were nothing compared to the risks run by those on the front lines of the Civil Rights movement, but their support made a significant difference nonetheless. A simple exercise is sufficient to make clear the importance of the federal government's role as partner--however fitful--in the quest for justice: imagine the Civil Rights movement occurring against the backdrop of the Bush administration, in which the concept of impartial justice is sneered at and the Civil Rights division has taken as its primary task the disenfranchising of African Americans. The thought is enough to make you sick.

Though I've stressed Branch's unrelenting efforts to make clear that the era was about more than just King--and his accounts of figures such as James Bevel, Bob Moses, Fannie Lou Hamer, Stokely Carmichael, and Diane Nash are unforgettable--ultimately the story does swirl around King, who in his unrelenting determination embodies the concept of leadership. Bone-weary, uncertain, frustrated, deliberative, King never stops moving, never stops planning, never flinches from his commitment to change through nonviolent action. When he takes the pulpit or the podium, his words sweep away all other alternatives; nonviolence is the only option, and it will--it must--carry all before it. Even forty years later, on the page, his speech from the end of the Selma-Montgomery march brings chills.

In his introduction, Branch sounds almost wistful for this creed that links Jesus to Tolstoy to Gandhi to King to, we hope, ourselves:

Nonviolence is an orphan among democratic ideas. It has nearly vanished from public discourse even though the most basic element of free government--the vote--has no other meaning. Every ballot is a piece of nonviolence, signifying hard-won consent to raise politics above firepower and bloody conquest.

Justice, nonviolence, commitment, bravery. We may not be able to live them as completely or as reliably as King, but in a sense that's how ideals should always be: just a little further down the road, leading us on and challenging us to get better, to do better, to be better.
Posted by Levi Stahl at 9:33 AM