And in this corner, Anthony Dymoke Powell! 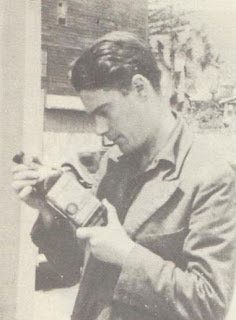 Though I understand that lists of the best this, the most that, and the greatest the other have an ineluctable appeal to editors--as well as an undeniable role to play in warming the air around barstools--I generally don't get too worked up about them. If this blog as a whole argues for anything, it's for the pleasures of creating one's own canon, pawing the stacks of the world's literatures to determine--and shout to the rooftops about--what belongs nearest one's own heart. It thus seems barely worth arguing about the vagaries of quasi-objective rankings, especially if I don't know the underlying aesthetic sensibilities of the compilers.

A few days ago, however, Ed from the Dizzies called on my services as a fan of Anthony Powell to argue against Powell's placement in the twentieth position, one behind Martin Amis, on the Times's list of the fifty greatest postwar British writers. Having been thus entered into the lists on behalf of my favorite writer, how could I refuse?

In some ways, the ranking seems absurd on its face: Amis's three or so good novels look paltry next to the twelve-novel stack of Powell's masterpiece A Dance to the Music of Time--let alone Powell's early and late comic novels, which stand at least equal with some of Evelyn Waugh's lesser works.

But that doesn't quite seem fair to Amis's novels, some of which I like a lot. While nowhere near as good as his father's best, Lucky Jim (1954), Martin Amis's The Rachel Papers (1973) is still one of the funniest books I've ever read--and, much like Joe Matt's comics, it's impressive in its ability to make me squirm with shame at certain elements of maleness I can't deny having at times shared with the feckless young narrator. London Fields (1989), though it ultimately shambles to a messy, disappointing conclusion, is nearly redeemed by the sheer audacious electricity of its prose.

And while I tend to prefer Powell's looser, more anecdotal approach when it comes to writing criticism, Amis's critical writing is also sharp and thoughtful, driven by an appreciation of precisely crafted descriptive prose and alert to humbuggery (yet without descending nearly so often as Christopher Hitchens into smug self-righteousness). The opening paragraphs of his reappraisal of J. G. Ballard's Crash on the occasion of the release of the David Cronenberg film give a good sample of the latter characteristic, accompanied by another trademark of Amis the reviewer: self-deprecation.

I reviewed Crash when it came out in 1973; and, as I remember, the critical community greeted Ballard's novel with a flurry of nervous dismay. But of course reviewers do not admit to nervous dismay. Nervous dismay is a response that never announces itself as such, and comes to the ball tricked out as Aesthetic Fastidiousness or Moral Outrage.

Crash provoked much fancy dress. Some reviewers reached for their thesauri and looked up "repellent"; cooler hands claimed to find the novel "boring." I'm not sure if anyone else adopted the guise I wore: sarcasm. Haughtily (and nervously), I sent Crash up. I was twenty-three. Later that year my first novel appeared, and, like Ballard, I stood accused of displaying a "morbid sexuality." In comparison, thought, my sexuality--and my novel--were obsequiously conventional.

Having said all that, I still choose Powell. With Dance he has given me dozens of characters who have quite simply become part of my mental universe. They are so richly imagined and sympathetically depicted that they inflect my everyday experience of the world; they're the sort of characters who, to the initiated, serve as topics of conversation, common reference points, aids to understanding new acquaintances, clarifying punch lines to real-life situations.

On top of that, Dance is consistently funny, its humor often grounded in the bewilderment created when those who care only for money or power are confronted with the world of art. Here, for example, Nick Jenkins fields a question from his friend and sometime nemesis Kenneth Widmerpool about his job:

"I was in publishing. Art books. Now it is the film business."

"Indeed? What unusual ways you choose to earn a living."

Or take this exchange, which finds Nick discussing books with the enthusiastic, if gruffly fuddled, octogenarian General Conyers:

"I've been reading something called Orlando," said the General. "Virginia Woolf. Ever heard of it?"

"I read it when it first came out."

"Rather hard to say in a word."

"Odd stuff, Orlando," said the General, who was not easily shifted from his subject. "Starts about a young man in the fifteen-hundreds. Then, about eighteen-thirty, he turns into a woman. You say you've read it?"

"The woman can write, you know."

The General thought again for some seconds.

"Well, I shall read a bit more of it," he said, at last. "Don't want to waste too much time on that sort of thing, of course. Now, psychoanalysis. Ever read anything about that? Sure you have. That was what I was on over Christmas."

Powell's characters--and the gentle irony of his tone--serve as a reminder that we're all strange in our own ways, and we apprehend one another poorly at best; a healthy response is to accept, and attempt to understand, as much of that odd individuality as we can. It's an approach to the world that I ultimately find far more congenial than Amis's more corrosive, biting, and often nasty perspective.

Powell, who didn't mind a literary feud, might enjoy being given the last word; perhaps the following excerpt from the fourth volume of his autobiography, The Strangers All Are Gone (1982) will serve as an acute reminder of the proper relation between himself and Martin Amis. Describing a visit to Kingsley and Hilly Amis early in Kingsley's career, Powell writes:

During the Swansea visit the three Amis children were in some skilful manner relegated so that the Uplands house was entirely free from them throughout our stay. Since Waugh was very keen on the doctrine that children should neither be seen or heard, Violet mentioned to him the adroitness of the Amises in having so resourcefully disposed of their family.

I wouldn't go so far as to say that Martin should be neither seen nor heard, but perhaps he should cede his hold on the nineteenth position to his elder and better?
Posted by Levi Stahl at 8:43 PM