"Pallid as bread dough and jowly as a squirrel," or, the masculine form as seen by Parker

Unable to kick my recently acquired Richard Stark habit, yesterday I read The Jugger (1965), which includes a couple of sharp physical descriptions of people Parker encounters that seemed worth sharing. This one's my favorite of the bunch:

The little guy standing there was dressed like he was kidding around. Dark green trousers, black-and-white shoes, orange shirt with black string tie, tweed sport jacket with leather elbow patches. The fluffy corners of a lavender handkerchief peeped up from his jacket pocket. His left hand was negligently tucked into his trouser pocket, and his right hand was stuck inside his jacket like an imitation of Napoleon. He had the lined and leathery weasel face of an alky or a tout, and he was both. He was somewhere past forty, short of eighty.

It probably won't surprise you that Parker refuses to work with this guy because he's unreliable. That opening line, meanwhile, reminds me of one of my favorite moments in Anthony Powell's A Dance to the Music of Time, perhaps because I remember reading in Publishers Weekly last year that Donald Westlake (Stark's real name) is a Powell fan. Near the beginning of the first volume, A Question of Upbringing (1951), Charles Stringham, a friend of narrator Nick Jenkins, puts a question to their classmate Peter Templer:

But my dear Peter, why do you always go about dressed as if you were going to dance up and down a row of naked ladies singing "Dapper Dan was a very handy man," or something equally lyrical. You get more like an advertisement for gents' tailoring every day.

Getting back to The Jugger, later we get Parker's contemptuous description of a shifty undertaker:

Gliffe at last came through the draperies at the far end of the room, like an apologetic Sydney Greenstreet. He was an extremely tall, somewhat heavy-set man, with sloping shoulders and broad beam and flat-footed stance. He was about fifty, black hair turning gray at the temples the way it was supposed to, face pallid as bread dough and jowly as a squirrel. His eyes were pale blue, watery, slightly protuberant beneath skimpy eyebrows; at the moment they were blinking away sleep. He was wearing a black suit and black tie.

He came forward as improbably light as a Macy's parade balloon, his dead-fish hand extended. 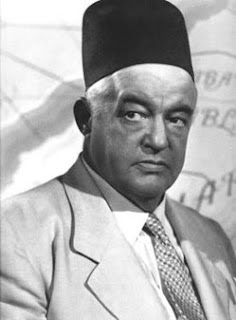 The question I'm left with after that description is whether Sydney Greenstreet ever uttered a sincere apology on screen. I'm confident that the unctuous Signor Ferrari never said a sincere word in his life, but what about The Maltese Falcon's Kasper Gutman? Or perhaps Greenstreet found occasion to apologize when he played William Makepeace Thackeray in Devotion?

Greenstreet's not the only public figure Parker calls on as a descriptive reference in The Jugger. He also delivers this picture of a corrupt local police captain:

Younger got on the phone and made his call and then sat down fat and smug on the sofa, the gun held casually in his lap. His brown suit was baggy and creaseless, his cowboy hat was tipped back on his head. He looked like a yokel Kruschev. 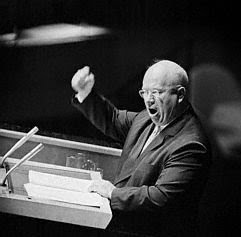 So which would you rather look like, an apologetic Greenstreet or a yokel Kruschev? Me, I'll take the fat man with the fez over the scary dude with the shoe any day.
Posted by Levi Stahl at 3:51 PM