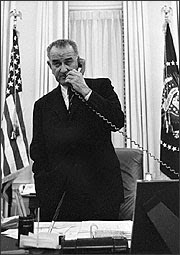 Lyndon B. Johnson's phone conversations, which Johnson secretly recorded himself, are a constant source of fascinating details in Taylor Branch's At Canaan's Edge. Johnson's folksy expressions--often colloquial to the point of inexplicability--married to his barrage of earthy, foul-mouthed, and seemingly gentle cajoling, served to hide a fierce determination that, in conversation at least, was rarely thwarted.

Even such a practiced, intractable foe as George Wallace could find himself utterly overwhelmed; in Branch's account of the pair's meeting after the 1965 violence in Selma, which is too long to quote here, Johnson's relentlessness leaves Wallace utterly stricken and sputtering, totally unmoored. If the defeated opponent were almost anyone but George Wallace, I'd feel sorry for him.

Though the instrumentality of LBJ's talk is what makes it historically important, what makes it flat-out fun for us amateurs is his language itself, its bizarre regionalisms and distended metaphors, like his description of himself as being "hunkered down like a jackass in a hailstorm."

Branch highlights one of those great recurrent metaphors in an exchange with Wilbur Cohen, who had been the administration's chief negotiator on Medicare. You also get a sense here of Johnson's style of incessant browbeating, as he presses Cohen to push for a vote on the measure quickly:

"Now remember this," he instructed Cohen, " Nine out of ten things I get in trouble on, is because they lay around. . . . It stinks, it's just like a dead cat on the door. . . . You either bury that cat or get some life in it." He reminded House Speaker John McCormack of a saying by his predecessor, Sam Rayburn, that a finished committee report was a dead cat "stinkin' every day."

In talking to another congressman, Wilbur Mills, Johnson--having taken a bite of a sandwich--says,

The obsession with stench reminds me of Alan Keyes, who in this clip from his quixotic 2004 Senate campaign against Barack Obama likened widespread governmental corruption in Illinois to a smelly toad at a cocktail party; it's worth watching for Keyes's crazy-man delivery alone:

And now that I've linked one multimedia clip, I can't very well fail to link to everyone's favorite Johnson audio clip, the one where Johnson, asks his tailor to

See if you can't leave me an inch from where the zipper (burps) ends, round, under my, back to my bunghole, so I can let it out there if I need to.

Oh, and he also talks about, as he puts it, his nuts. Extensively.

All you young future presidents out there take note: that, at least as much as Nixon's missing eighteen minutes, is your object lesson in why you shouldn't secretly tape your phone calls.
Posted by Levi Stahl at 7:57 PM