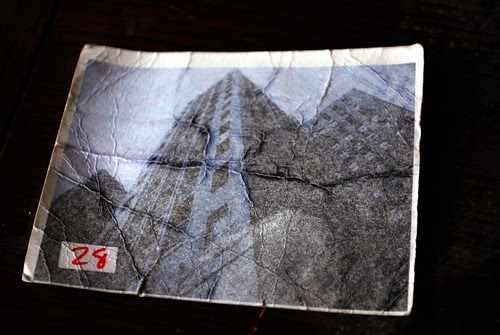 On returning from my recent trip to New York, I found the above claim check in the pocket of my coat. Clearly, I'd forgotten to redeem something I'd left with the management of some establishment. But what could the item have been? My fedora, my coat, and my shoulder bag all made the return trip with me. For a while I thought I'd lost a tie, and I enjoyed imagining a forgotten moment in some bar when, having been deemed overdressed, I was forced to strip it from my neck with a flourish and hand it to the coat check girl in the ripped Metallica t-shirt. But alas, even the tie eventually turned up.

Then there's the question of where I checked said mysterious object. The ticket bears no writing aside from that red "28," and gives no clue to its origins. I suppose the next time I'm in New York I could retrace my steps, presenting this claim check at every bar and restaurant I visited this time around, enduring blank stare after blank stare until, finally, someone takes the ticket with a brisk nod, spins on a heel and disappears into the back room to return moments later with . . . what?

Or I could turn to an old favorite, Ludovico Ariosto's Orlando Furioso (1516) and employ the method used by the English knight Astolfo, friend of the love-maddened Orlando, when he wishes to seek out poor Orlando's lost wits. Astride a hippogriff, he flies to the moon, and here, in Barbara Reynolds's translation, is what he finds there:

Between two mountains of prodigious height
The travellers to a deep valley went.
What by our fault, or Time's relentless flight,
Or Fortune's chances, or by accident
(Whatever be the cause) we lose down here,
Miraculously is assembled there.

Not only wealth and kingdoms, which the wheel
Of Fortune whirls at random among men,
But what she has no power to give or steal,
Such as the following, I also mean:
Tatters of fame are there, on which a meal
Is made (the tooth of Time is sharp and keen);
Prayers to God and penitential vows
Which sinners make with humbled knees and brows,

The tears of lovers and their endless sighs,
The moments lost in empty games of chance,
Vain projects none could ever realize,
The fruitless idleness of ignorance,
And unfulfilled desire--which occupies
More room than all the rest and more expanse:
In short, whatever has been lost on earth
Is found upon the moon, for what it's worth.

The question, I suppose, is how quickly left objects become the moon's responsibility? Is it after a set amount of time, or does it happen the moment the person holding the claim check has forgotten what it redeems? It would be extremely frustrating to arrive at the moon only to learn that Death & Co. still held my . . . whatever it is.

A trip to the moon's repository also offers risk of embarrassment, as Astolfo discovered when he entered the chamber containing various vials of lost wits:

A liquid, thin and clear, Astolfo sees,
Distilled in many vases, large and small,
Which must (so volatile the fluid is)
Be tightly corked; the largest of them all
Contains the greatest of those essences:
The mind of mad Anglante, of whose fall
You are aware and of his frenzied fits.
And on it the duke read: "Orlando's wits."

On other bottles too the names are shown
To whom the wits belong. To his surprise,
Astolfo finds a great part of his own.

A New York trek is sounding like the better idea all the time. I only hope whatever I checked wasn't perishable.
Posted by Levi Stahl at 8:49 PM