Travelers and affinities, expected and unexpected 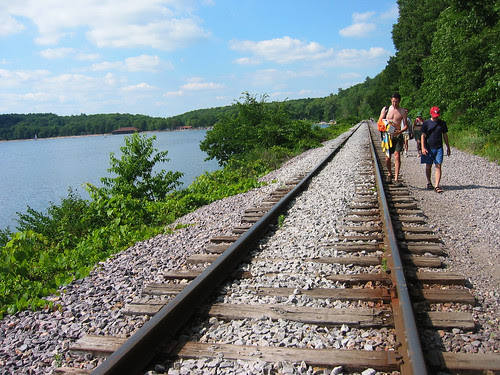 1 I nodded off on the L on my way home from work yesterday while reading Thomas Hardy's The Hand of Ethelberta (1866), and my half-dreams were of the novel--but as if it had been written by Alvaro Mutis, whose Maqroll stories I had spent the weekend reading. Waking, I was amused at the ease with which the world-weariness of Mutis had infiltrated Hardy's uncharacteristically comic novel.

If you'd asked me, I would have said the two writers had nothing in common, but the dream reminded me that Hardy's more typically tragic novels do share with Maqroll a certain fatalistic vision. I was reminded of an exchange I've quoted before from a conversation that Hardy had with Princeton professor Henry Van Dyke in 1909, about Tess:

"Why, then, did you kill her? Was there no other way to end the book"

"There was no other way," he replied, still more gravely. "I did not kill her. It was fated."

Maqroll would understand, though whereas he tends to complacently accept, or even welcome, his fate, Tess is unforgettable because she rails against hers--and by vigorously opposing it, hastens its tragic arrival.

2 Near the end of John Updike's review of The Adventures and Misadventures of Maqroll in the January 13, 2003 issue of the New Yorker, he writes,

Lone rangers, from Don Quixote to Sam Spade and James Bond, are customarily engaged in combat against bad guys; they afford themselves the escapism of a virtuous quest, a perpetual cleanup. Maqroll instead presents himself as one of the bad guys, "on the periphery of laws and codes," and proposes that bad guys aren't so bad, as they smuggle and pimp and deal their way through the world.

When I read that yesterdy morning, it crystallized a thought that had been nagging me all weekend: Maqroll is also strange kin to Richard Stark's robber, Parker. Maqroll is wildly different from Parker in that he is essentially harmless, his underlying innocence somehow surviving the questionable morality of many of his occupations. But this weekend as Maqroll demonstrated again and again his preternatural ability to wait out events--as in this scene from Un Bel Morir,

Then two booming explosions echoed down the ravine. They sounded like bazookas or high-powered grenades. . . . An unexpected sense of relief lightened his step. What he had feared so much was finally here. Uncertainty had ended, and with it the anxiety that deforms and poisons everything. Once again men had begun the dark work of summoning death. Everything was in order. Now he would try to get out alive.

--I was reminded of the following exchange, between a police artist and two officers, from Stark's most recent Parker novel, Dirty Money (2008):

"I think, Gwen Reversa told her, "the main thing wrong with the picture now is, it makes him look threatening."

The artist, who wasn't the one who'd done the original drawing, frowned at it. "Yes, it is threatening," she agreed. "What should it be instead?"

"This man," the captain said, gesturing at the picture, "is aggressive, he's about to make some sort of move. The real man doesn't move first. He watches you, he waits to see what you're going to do."

3 Finally, there's the inescapable link with Italo Calvino's best book, Invisible Cities (1972), and its inspiration, Marco Polo's captivating, untrustworthy account of his travels to the far East. In Calvino's hands, Polo's journeys are stripped of their purpose as trading missions and transformed into compulsive wanderings, real and imagined:

"Journeys to relive your past?" was the Khan's question at this point, a question which could also have been formulated: "Journeys to recover your future?"

And Marco's answer was: "Elsewhere is a negative mirror. The traveler recognizes the little that is his, discovering the much he has not had and never will have."

As portrayed by Calvino, Marco Polo's travels, and his fantastical accounts of them to Kublai Khan, are in some sense quest for the home, with its clarity and understanding, that for the compulsive traveler lies forever just around the corner--or perhaps in the irretrievable past. As Polo, locked in a jail cell in Venice, first set down his adventures, I think Maqroll would have been welcome company:

He thought perhaps there really was no place for him in the world, no country where he could end his wandering. Just like the poet who had been his companion on long visits to countless bars and cafes in a rainy Andean city, the Gaviero could say, "I imagine a Country, a blurred, fogbound Country, an enchanted magical Country where I could live. What Country, where? . . . Not Mosul or Basra or Samarkand. Not Karlskrona or Abylund or Stockholm or Copenhagen. Not Kazan or Kanpur or Aleppo. Not in lacustrian Venice or chimerical Istambul, not on the Ile de France or in Tours or Stratford-on-Avon or Weimar or Yasnaia Poliana or in the baths of Algiers," and his comrade continued to evoke cities where he perhaps had never been. "I, who have known them all," thought Maqroll, "and in many have turned life's most surprising corners, now I'm running from this shit hamlet without knowing exactly why I let myself be caught in the most stupid trap that destiny ever set for me. All that's left for me now is the estuary, nothing but the marshes in the delta. That's all."

Or, as the Bible puts it,

Foxes have holes, and birds of the air have nests; but the Son of man hath not where to lay his head.

So the travelers shoulder their packs and keep on with their journeys:

Carried by the current, the barge sailed into the night as if it were entering a lethal, unknown world. The Gaviero, without turning around, waved goodbye with his hand. Leaning on the tiller, he looked like a tired Charon overcome by the weight of his memories, on his way to find the rest he had been seeking for so long, and for which he would not have to pay anything.