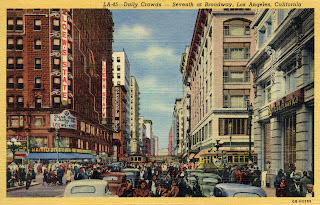 In a thousand years or so, when the first archaeologists from beyond the date line unload their boat on the sands of Southern California, they will find much the same scene as confronted the Franciscan missionaries. A dry landscape will extend from the ocean to the mountains. Bel Air and Beverly Hills will lie naked except for scrub and cactus, all their flimsy multitude of architectural styles turned long ago to dust, while the horned toad and the turkey buzzard leave their faint imprint on the dunes that will drift on Sunset Boulevard.

For Los Angeles, when its brief history comes to an end, will fall swiftly and silently. Too far dispersed for effective bombardment, too unimportant strategically for the use of expensive atomic devices, it will be destroyed by drought. Its water comes 250 miles from the Owens River. A handful of parachutists or partisans anywhere along that vital aqueduct can make the coastal strip uninhabitable. Bones will whiten along the Santa Fe trail as the great recessional struggles eastward. Nature will reassert herself and gently obliterate the vast, deserted suburb. Its history will pass from memory to legend until, centuries later, as we have supposed, the archaeologists prick their ears at the cryptic references in the texts of the 20th Century to a cult which once flourished on this forgotten strand; of the idol Oscar, sexless image of infertility; of the great Star Goddesses who were once worshipped there in a Holy Wood.

I'm in Los Angeles this week for work. Hopefully Waugh's apocalyptic vision will be postponed at least through the weekend, when I'll return to the more sedate confines of Chicago.

Unless, that is, I get discovered. Wonder if I've got time to pop into Schwab's Drug Store before my meetings?
Posted by Levi Stahl at 10:47 AM