"Consequently, the initial prospect of spending the major part of his life going to work was painfully depressing." 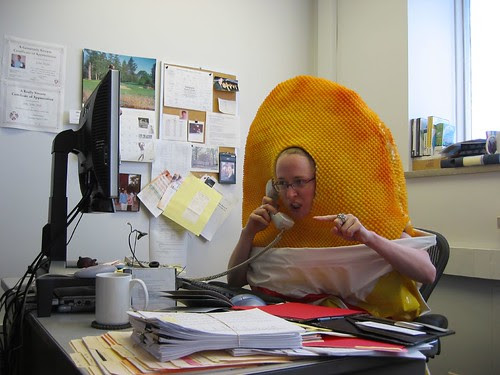 Those of you who've served time in an office will surely recognize this guy:

At work he has no clearly defined tasks because his colleagues and supervisors have never been able to detect in him any particular skills or competence. Whatever task he is given he performs in such a way that his supervisor is always hard put to it to say whether he has performed it well or badly. No matter how closely he looks or how carefully he reads, the best he can come up with is: "Leave it for now, I'll take a look at it later . . yes, well it seems more or less alright."

Apparently some aspects of office life never change: the above is not from Ed Park's brand-new, critically acclaimed novel of office life, Personal Days, but from Ivan Goncharov's Oblomov, which was published in 1859. As I was traveling when Ed's book was published this week and therefore couldn't pick up the copy I'd pre-ordered at 57th Street Books, I was pleasantly surprised to discover some office comedy in Oblomov.

The titular gentleman of the novel is primarily known for spending most of his life in bed, alternately daydreaming and dozing--but as a young man he worked in Russia's senselessly bureaucratic civil service. Like many a person entering on his first job, Ilya Ilyich Oblomov brought some misconceptions to the workplace:

He imagined that office colleagues were just one close, happy family constantly putting themselves out for each other's comfort and pleasure and that attendance at the office could not possibly be a kind of compulsory custom that you simply had to observe every single day and that slush, heat, or mere disinclination would be adequate and legitimate grounds for non-attendance.

Imagine his dismay on realizing that nothing short of an earthquake could excuse a healthy civil servant's absence from his place of work and that, in any case, St. Petersburg never had the good fortune to have earthquakes. No doubt a flood would also be acceptable grounds, but floods hardly ever happened there either.

Worse was his misunderstanding of the role of the boss:

At home, he had heard that a boss or a supervisor was a father to his subordinates and had formed an image of such a personage, an image as beaming and benign and indulgent as a member of his own family. He saw him as a kind of second father who lived and breathed only to reward his subordinates and to cater, unceasingly and unremittingly, regardless of their merits, not only to their needs but even to their pleasures. Ilya Ilyich thought that a superior was so intimately bound up in the welfare of his subordinates that he would inquire anxiously whether he had had a good night's sleep, why his eyes were a little cloudy and whether he might not have a little headache.

And all that frantic kowtowing occurs despite Oblomov's department having a relatively good supervisor:

Between the rush of duties ("It doesn't leave a moment for living!" Oblomov laments) and his fear of his supervisor ("[T]he moment the boss addressed him, he would find that his natural voice had been replaced by something nauseatingly insipid."), poor Oblomov quickly becomes a wreck . . . so he forges a doctor's note diagnosing himself with hepatitis and an enlarged heart, both blamed on the office, which he then forsakes forever in favor of his bed.

Those of us without substantial private incomes from large country estates, however, will inevitably be back on the train Monday--but with Personal Days under one arm, Oblomov under the other, we'll have an extra spring in our step and a glint in our eye, our quiet laughter a sufficient defense against our fellow commuters' confused contempt.
Posted by Levi Stahl at 6:58 PM