Spicing your egg nog with misanthropy 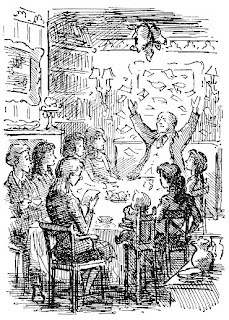 When I read Ivy Compton-Burnett I fight a persistent urge to share every passage with everyone around. Her novels, written almost entirely in dialogue, are so sharp and funny, the words so finely chosen, that every time I start to pick out an example to share I find that I don't know where to stop, for each additional line brings a new parry or thrust, adding a further wrinkle to her deeply misanthropic portrayal of familial wars. Every conversation is a struggle, and a finicky exactitude of language, determined ruthlessness, and grim fatalism are the only proven weapons. If you've not read her, you might imagine her as a Wodehouse who turned his gift with words and sense of humor not to entertainment, but to an effort to prove that, yes, it really is all that bad--or an Ealing Studios comedy that everyone involved is determined to play as the most grotesque, yet understated tragedy.

Today, I'll limit myself to this one scene, from her Master and Maidservant (1947), one of a pair that the New York Review Classics line has republished. Though there are several characters in this scene, all you really need to know is that they are a well-to-do family sitting down to dinner, of which family Horace is the tyrannical and determined skinflint at the head, Charlotte is his wife, and George, who enters partway through, is the young manservant.

"Six cutlets would have been enough," said Horace. "They know we do not eat seven. One cold cutlet does not serve any purpose. It means that one of the servants will eat it for supper."

"And is that quite a useless end for it?" said Mortimer.

"Of course it is, when other things are provided. It will be eaten as an extra, and that is pure waste."

"Not quite pure, is it?" said Emilia, smiling.

"I suppose Cook thought Emilia or I might take a second cutlet," said Charlotte. "It was not such an unnatural line of thought."

"I wish they would not think," said Horace, who tended to take both this view and the opposite. "Their thinking can be done for them."

"And other things cannot," said Emilia. "That is the strength of their position."

"I will have the cutlet," said Charlotte, "and prevent the end that is feared for it."

"But it will establish the custom of having one too many," said Horace.

"It is not so easy to mold the future. One cutlet will hardly do so much. They will only think we don't usually have quite enough to eat, and I daresay they already think that."

"They cannot," said Horace, sharply. "We are not large eaters, and why should we supply the table simply for show?"

George entered to remove the plates, and cast his eyes over the empty dish.

"George had counted on that cutlet," said Horace, with grim comprehension.

"Do not expose the tragedies underlying daily life," said Charlotte. "We do not want George to come back and find me in tears. Though of course he would not know I was weeping for him."

"You are childish at times, Charlotte. You know that George is well fed."

"I know nothing about it. I somehow feel he is not. I can not ask him if he has the same feeling."

"The housekeeping is not your province."

"No, it is a dark undercurrent that I do not dare to sound. That may be why I like to refer to it. Speaking of things robs them of half their terrors."

Compton-Burnett seems the perfect writer for the holiday season, with all its family gatherings; she serves as a counterpoint to the public air of cheerfulness and goodfellowship and at the same time as a reliable bulwark against too much despair. For no matter the state of your family's internal relations, they're unlikely to be worse than those she depicts---though by the same token, they're also unlikely to be as mordantly funny. Meanwhile, those of us with the undeservedly good fortune to be in reasonably pleasant family situations might, infected by too much Compton-Burnett, wickedly adopt the tone of one of her characters and observe that you do all have your crosses to bear, don't you?
Posted by Levi Stahl at 3:59 PM