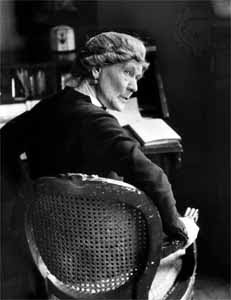 Whenever I read Ivy Compton-Burnett I find myself remembering some lines from one of Barbara Pym's letters, which I quoted last year when I first wrote about Compton-Burnett:

The influence of Miss Compton-Burnett is very powerful once it takes a hold, isn’t it? For a time there seems to be no point in writing any other way, indeed, there seems not to be any other way, but I have found that it passes (like so much in this life) and I have now got back to my own way, such as it is. But purified and strengthened, as after a rich spiritual experience, or a shattering love affair.

What stays most firmly in the mind is Compton-Burnett's precise language, which she deploys to create a tone of stunning astringency. One of her tendencies that I find particularly infectious is her habit of ending her characters' pointed exchanges with a clarifying aside, often delivered as a corrective of sorts by the character who's gotten the worst of the discussion. Take the following scene from Manservant and Maidservant (1947), for example. Sarah, the eldest daughter, has just been discovered with grateful tears in her eyes that were brought on by overheard words of praise from her siblings. The family nurse, two younger brothers (Avery and Marcus), and the unfeeling patriarch, Horace, discuss the discovery:

"Why does Sarah cry?" said Avery.

"She was touched by what she heard," said Nurse, blinking her own eyelids.

"Her heart was touched," said Nurse.

"There is no need to elaborate the matter," said Horace, sharply. "There is no occasion to pity anyone, because she hears a pleasant word of herself."

"It is when people don't, that they are made to cry when they do," said Marcus.

The adverb, "sharply," attached to Horace's comment reminds of how often, and how well, Compton-Burnett uses adverbial phrases--a trait she shares with Pym, though their use of them could hardly be more different. Compton-Burnett, needing adverbs to help anchor her lengthy stretches of dialogue--words are spoken "in an indulgent tone," "half to himself," "with grim comprehension"--employs them almost as much as markers of the speaker's intentions as of actuality: this is the way the speaker, arching an eyebrow and looking around, wants his words to be taken. Pym, on the other hand, seems most often to rely on the adverbs that the listener would be likely to supply; in her world of timid church ladies and ineffectual curates, the way a remark is taken tends to have far more weight that the intentions behind its utterance.

The adverbial phrases are actually themselves characteristic of a larger trait, perhaps the one I most admire in Compton-Burnett's writing: she seems never to let a joke rest with its first effect. Rather, one gets the sense that she meticulously worked and reworked her scenes, pushing and prodding every exchange to see if she could squeeze out one more barbed line--and thus expose one more facet of her characters' relationships. It reminds me of what football commentators refer to as "a good second effort," that extra push a strong running back will deliver after first being rebuffed. It may only gain him one or two additional yards, but those yards can be crucial. (I can't believe I'm comparing Ivy Compton-Burnett to football, but there you are.)

I'll give you two brief examples. In the first, the childrens' new tutor, Gideon, tells his widowed mother, Gertrude, about his employer, whom she declares an intention to meet.

"Why do you want to meet the man?" said Gideon, who did not know that his mother wanted to meet any man within twenty years of her own age, and was willing to meet any one outside this limit.

"I do not want to meet him," said Gertrude, who hardly knew it herself.

It would have been a good joke had it ended with the revelation of his mother's catholic interest in men; it becomes sublime with the addition of her lack of self-knowledge.

Something similar happens in this scene, wherein Sarah reads to her seven-year-old brother, Avery, who has been severely chastised for mild misbehavior:

Sarah was seated on Avery's bed, reading from the Book of Job, not from any sense of fitness, but because it was her brother's choice. He lay with a convalescent air, his face responding as the words confirmed his memory.

To close, I'll return to Barbara Pym, but this time by way of Nancy Mitford. I would have expected Mitford to be a fan of Compton-Burnett, whose portraits of isolated families of precocious children and eccentric, tyrannical parents would have, I thought, appealed to any of the Mitfords But no: as she confessed in a letter to her friend Heywood Hill, "I wish I could get on with Miss Compton-Burnett, but it's my blind spot." She was always interested in gossip, however, so Hill later wrote to her about Compton-Burnett's last days:

Influence, it turns out, can be read both ways: Barbara Pym may have lamented falling under the spell of Compton-Burnett, but can you imagine a more Barbara Pym line than that one?
Posted by Levi Stahl at 9:57 AM