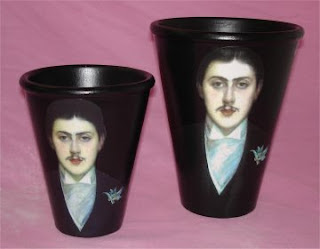 Perhaps every author should have one of these: a pot--fireproof, one assumes--with his own face on it. Placed beside the author's desk, or, in some cases, sickbed, ready to receive any productions of her pen that she believed unfit to face the depredations of the world.

And there's no end of accessories that could be sold to accompany it: silver matchboxes engraved with lines from the author's first, wildly successful novel; a close-fitting lid with which to snuff fires, découpaged with a scene of the author's works heaped on the remainder table; a rough stone for striking matches, painted with the hideous, lolling tongue and ghastly, pale, insatiable countenance of a skiving biographer.

From André Aciman's introduction to the New York Review of Books edition of Monsieur Proust (1977), by Céleste Alberet

But the greater--incalculable--loss is the disappearance of Proust's cahiers noirs (black books), which Céleste describes as containing "the first drafts of the book, long fragments and even whole chapters written in the course of earlier years, even of his youth." Proust had ordered her to burn all thirty-two of them. Sometimes, because he had more than just a tendency to distrust everyone and must have suspected her slightly mischievous side, he began to fear that she might disobey him and spirit the notebooks away. But no, Céleste was faithful to a fault. She carried out the incineration, blindly, reducing all thirty-two notebooks to ashes. Max Brod proved himself a far more judicious friend when he broke his promise to a dying Kafka and decided not to burn the latter's manuscripts.

At least we still retain some of Proust's dizzingly layered manuscripts to marvel at: 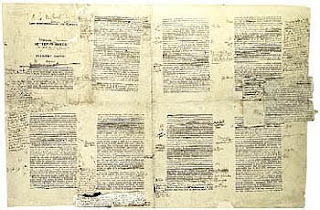 One look at that is enough to make me glad that I'm a Proust fan rather than a Proust scholar.
Posted by Levi Stahl at 2:45 PM