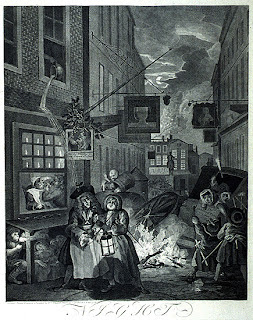 In reading Richard Holmes's Dr Johnson and Mr Savage (1993), a careful reconstruction of the brief but powerful friendship between the young Samuel Johnson, not yet a success, and Richard Savage, a raffish, arrogant, obsessive ne'er-do-well, bastard, poet, and, oh, yes, killer, I came across a couple of odd tidbits about archaic English law that seemed worth sharing.

In 1727, Savage stabbed a man to death with a sword during a late-night brawl at a coffeehouse. Though accounts differ--and much of the pleasure of Holmes's book is afforded by his careful parsing of those accounts--it seems clear that Savage and his two drunken companions, upon entering the coffeehouse, demanded that they be given a private room, and, when told that the room was occupied and temporarily unavailable, barged into it and began breaking furniture and acting in a haughty and threatening manner to its lower-class occupants. As Holmes succinctly notes,

Savage and his friends had assumed social precedence, the privilege of moneyed gentlemen to command and bully, which the habitues of Robinson's Coffee-house were not prepared to grant them

A scuffle ensued, during which Savage landed the fatal blow.

At his trial, Savage drew an infamous hanging-judge, Francis Page (who, Holmes points out, is caricatured in Tom Jones). Johnson, reconstructing the trial for his later, far-from-impartial Life of Savage, presents the following version of the Judge's summing-up of the case, taken from Savage's later recountings, that demonstrates how pointed the judge's remarks could be:

Though that may strike you as a bit much coming from a judge--who is, after all, supposed to be instructing a jury to weigh the evidence and make their own decision--it's nothing compared to what came next. According to Alexander Pope, who watched the trial from the gallery, the judge concluded by instructing the jury to find all three men guilty of murder. Holmes is quick to point out that

Such positive direction would never be countenanced in a modern courtroom; yet it was not unusual in an eighteenth-century one.

Forthright instructions aside, the jury did actually make up its own mind, finding only two of the men--including Savage--guilty of "wilful murder," while naming the third guilty only of manslaughter.

Committed to Newgate to await his execution--which would eventually be forestalled by a pardon--Savage explained to his friend Theophilus Cibber that he was holding up well, aside from having to put up with the "insipid visits" of the Newgate padre, of whom there was no way of ridding himself,

except one; which was by talking on points of religion, and learning, a little above his capacity.

Holmes can't resist pointing out that there may have been a reason for the preacher's tenacity:

[I]ncidentally, by a curiosity of prison regulations, [the padre] had the publishing rights to any written confession he could extract from his charges.

I suppose that's one way for lawmakers, concerned about the souls of those confined to Newgate, to be sure that the churchmen would be properly attentive to their charges. And though that practice seems bizarre on its face, I'm not sure we're even now quite settled the question of how to deal with the confessions of a murderer: think of the Son of Sam laws and If I Did It. So long as the ghoulish interest remains, so will the question of divvying up the spoils.
Posted by Levi Stahl at 4:27 PM