Lost in the night 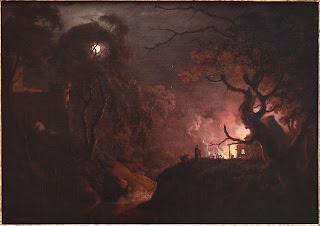 Their night-ward studies, wherewith they close the day's work.
MILTON ON EDUCATION.

Tonight I'm returning one last time to the well of fascinating knowledge that is Richard Holmes's Dr Johnson and Mr Savage (1993). The book's primary story, which I've barely addressed in the couple of posts for which I've already drawn on the book, is in itself full of interest: Holmes applies all his skills as a biographer to discover the nature of Samuel Johnson's friendship with the poet Richard Savage, whose biography Johnson would write in the year after Savage's death. The pursuit of that friendship allows Holmes to draw attention to--and conclusions about--the young Johnson in the years before his fame; to that, he adds an affecting portrait of the talented, maddening, irascible, self-destructive Savage.

But what I enjoyed most in the book were the incidental discoveries and asides that Holmes delivers, the facts and ideas that help him to flesh out his portrait of Augustan England. I wrote a few days ago about some archaic points of eighteenth-century English law that caught my eye; today I'll turn to one last example in that line. Holmes points it out during Savage's last months, at the end of 1742, when, broke and increasingly forlorn, he became an increasing burden on his friends and patrons, and,

[B]y the end of the year, the old pattern of his city life reasserted itself. "All the Charms of his Conversation could not compensate" for his hopeless irregularity as a house-guest. He harassed friends with his talk and his drinking; and he finally repelled them with his endless schemes and demands. His clothes, like his novelty value, started to wear thin. He began to be pursued by small debtors, and slowly reverted to the tramp-like existence of his former days, lodging at taverns and wandering the streets at night.

That wandering was in part habitual, possibly even preferred: Savage had long been a late-night carouser; in fact, the event that brought him his greatest fame--his conviction for murder--had come about as a result of a wee-hours brawl.

NIGHTBRAWLER
One who raises disturbances in the night.

You unlace your reputation,
And spend your rich opinion for the name
Of a night-brawler.
SHAKESPEARE'S OTHELLO.

But his turn to the nocturnal this time had a further, more specific purpose as well. As Holmes explains,

This grim, lethargic life was partly forced on Savage by municipal laws, which prevented bailiffs from arresting anyone for debt between the hours of sunset and sunrise. Night thus became the only time Savage could venture out from his hiding-place, which was a back-street tavern called the White Lion.

In his At Day's Close: Night in Times Past (2005), A. Roger Ekirch fleshes out the picture a bit:

Numerous folk, besides burglars, robbers, and other hardened rogues, exploited the evening darkness, often for illicit purposes. . . . For poor families, social and legal constraints of all sorts eased. . . . Likewise, debtors and other fugitives, fearful of arrest [in the day], traveled freely. At night, wrote Thomas Dekker, "The banckrupt, the fellon, and all that owed any mony, and for feare of arrests, or justices warrants, had like so many snayles kept their houses over their heads all day before, began to creep out of their shels."

Ekirch even points out a custom that could possibly have helped Savage, exiled (at the suggestion of and with a handsome stipend provided by Alexander Pope) as he was in Bristol, save on lodging:

Squatters in parts of Western England and Wales laid more permanent claims. A local custom of uncertain origins permitted one to occupy a piece of waste or common land by building a turf cottage overnight, generally known as a caban unnos. The work had to be completed between twilight and dawn, though friends and family were permitted to help.

It's impossible, though, to imagine Savage, whose self-styling as a gentleman bastard was one of the great sources of his misery, turning his hand to such low building work. Instead, he remained afoot and a-stagger in the lanes of Bristol, suffering increasingly from illness, drink, and depression. As the winter wore on and the nights of wandering grew longer, Johnson tells us that "Distress stole upon him by imperceptible Degrees."

NIGHTFARING
Traveling in the night.

Finally Savage lost even his battle with the diurnal cycle, being nabbed when returning to his quarters after dawn from a too-long party. A group of bailiffs arrested him for a debt of eight pounds to a Mrs. Read, owner of a coffeehouse--whom Savage, with his usual ferocity towards his enemies, later referred to in letters as "Madame Wolf-Bitch."

Savage would die in jail just over six months later, leaving, in a sense, Johnson to write his epitaph, in the Life of Savage:

There are no proper Judges of his Conduct who have slumber'd away their Time on the Down of Plenty, nor will a wise Man easily presume to say, "Had I been in Savage's Condition, I should have lived, or written, better than Savage."

For tonight, though, I'll let Dr. Johnson reassume his lexicographer's hat and have a different--and single--last word.

NIGHTFOUNDERED
Lost or distressed in the night.

Either some one like us night-foundered here,
Or else some neighbour woodman, or at worst,
Some roving robber calling to his fellows.
MILTON.