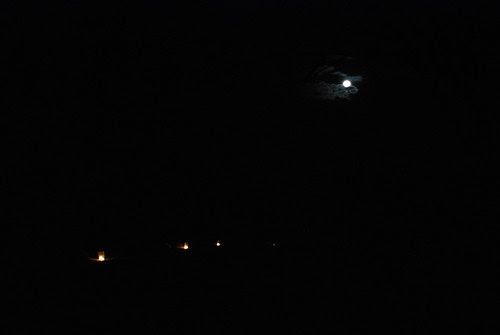 Anticipation of the upcoming English translation of Haruki Murakami's 1Q84 (and the building consensus that it's his masterpiece) sent me back to my shelves this week to read some of the unread Murakami that has been patiently waiting there. I ended up choosing After Dark (2004, English translation by Jay Rubin, 2007), a slim novel that takes place over the course of the wee hours of one night in Tokyo.

After Dark is a slight novel, and it's far from Murakami's best. Only a few of its characters really come to life, and the elliptical connections between them seem less the product of the Dickensian fecundity of urban crowding than of the banal natural intersections of life in a contemporary capitalist economy. And yet . . . there's still something to the book that makes it valuable. It's a mood, really, a sustained hush that does seem to embody the feeling of the quiet little hours of the dead of night, as if things done in the dark will never be shewn forth in the light--not because they are evil, or even inherently secret, but because the world of sleepers that surrounds them makes everything seem, and maybe actually be, fundamentally less real. 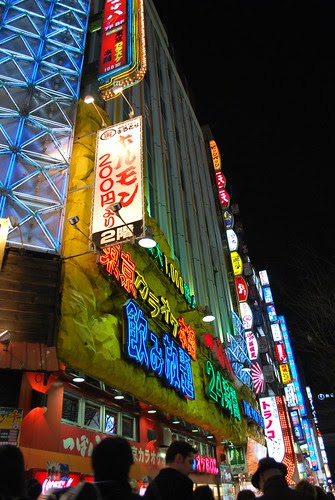 As I finished the book, emerging into the day and the L train as if I, too, were rising up from sleep, I realized with a start what After Dark is. It's a companion, a rewriting, an opposite-side-of-the-world take on Steven Millhauser's Enchanted Night (1999). I happened recently to casually link Millhauser and Murakami, in my post on my preference for not interpreting Kafka, but I'd never thought of them in such close conjunction as this before. Millhauser, for all the pleasures his books afford, has always seemed too artful--even, at times, arch--to truly be a companion to Murakami's more organically strange imagination.

Yet when he's at his best, Millhauser offers many of the same pleasures, seen through a distinctly American frame. He transposes Murakami's tales of urban ennui and solitude to midcentury America, with its booming suburbs and their tenuous, newly constructed social bonds; its small towns seeing the first downhill steps of their decline; the awkwardly pubescent dreams of its baby boom children; the solitude (and dreaming) created by its push for conformity; the secrets, the secrets, the secrets. Some of this is territory mapped out by Ray Bradbury--hell, some of it is territory mapped out by Sherwood Anderson--but Millhauser buries some rue at the heart of Bradbury's nostalgia, swaps out the fear and menace of the dark in favor of the fears generated by desire, and polishes his language to a richly elegant sheen.

On to Enchanted Night. It's short, only 109 pages, and, like After Dark, it's easily dismissed as a minor work. It follows the events of one hot summer night in a town in southern Connecticut--which, mostly, means following the restless sleep and secret perambulations of a number of characters. There are magical surprises; there is desire, requited and unrequited; there is the reminder, inescapably woven throughout, that before air conditioning the world, windows open, sheets wet, was a different place. What there is not, really, is an attempt to claim anything larger for the story, to draw it together or build with it--Millhauser, it seems, is content to let us be innocent peeping Toms here, watching omnisciently what we usually miss out on while under the spell of the oneiri.

But, perhaps because Millhauser had the sense to keep the book brief, it works. It's a volume I go back to regularly, always on summer nights, when--any teens who happen to be reading are advised to turn away now--the weather makes it seem like life ought to offer more possibilities than it does (however acceptably bounteous those possibilities are when exposed to daylight), like Good God!, we ought to be out in this doing things, rather than sitting at home, reading and watching baseball. Here--think of summer, and try it:

In the warm night air, under the dark blue sky, Laura feels soothed: she can breathe now, out in the open,as if the suburban night under the wide sky is a western prairie. She thinks of cowboys in old movies, saddlebags, snorting horses, blankets under the stars. Yep. Ah, reckon. No sidewalks here--she walks along the edge of the road, under streetlights arching out from telephone poles. In the tangerine-colored light she watches her shadow stretching out longer and longer, a taffy girl, a telescope girl. Where to go?

The moon, climbing so slowly that no one notices, shines down on Main Street. It casts a deep shadow on one side of the street and an eerie brightness on the other, where the sidewalk is bone-white and the little glass windows of the parking meters glisten as if they are wet.

And now let's bring Murakami back into the mix. Here's his opening:

Eyes mark the shape of the city.

Through the eyes of a high-flying bird, we take in the scene from midair. In our broad sweep, the city looks like a single gigantic creature--or more like a single collective entity created by many intertwining organisms. . . . Midnight is approaching, and while the peak of activity has passed, the basal metabolism that maintains life continues undiminished, producing the basso continuo of the city's moan, a monotonous sound that neither rises nor falls but is pregnant with foreboding.

The room is dark, but our eyes gradually adjust to the darkness. A woman lies in bed, asleep. A young, beautiful woman: Mari's sister, Eri. Eri Asai. We know this without having been told so by anyone. Her black hair cascades across the pillow like a flood of dark water.

We allow ourselves to become a single point of view, and we observe her for a time. Perhaps it should be said that we are peeping in on her.

The hiddenlife of nighttime, for both authors, generates a second, secret level of voyeurism, of godlike viewing of people who, shielded by the darkness, think of their actions as fundamentally private, unknowable. The effect is to make us feel as if we're being let in on a secret, even if that secret, analyzed in the day, is as simple as the realization that everyone has secrets.

Murakami's night is crowded, neon-lit, yet atomized; Millhauser's is near-silent, dewed, and oddly hopeful. I love, love, love, love, love the idea that they are twinned, that After Dark is Murakami's answer to Enchanted Night-- and let's not forget that Murakami deals in doubles and doppelgangers and dualities--that After Dark's night, young and urban, follows the sweatier summer wanderings of Enchanted Night like night follows day--like these two spots on opposite sides of the globe take turns with the sun. 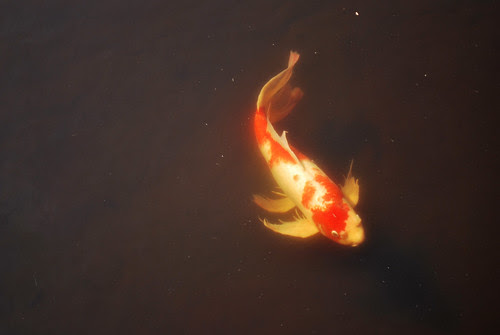 Read them together, then go for a late-night walk. 'Tis good medicine they'll bring ye.
Posted by Levi Stahl at 9:24 PM