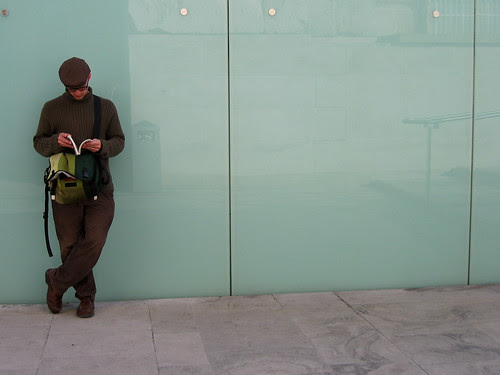 1. About half of Stacey's photos of me are of me reading. Seems about right.

2. On the L Friday on my way home from work, I sat next to a man who was reading a beat-up old mass market paperback of Sister Souljah's The Coldest Winter Ever (1999). Every time he turned a page, he would press the book open until its two garish covers touched, then return it to a normal reading position. It was a perfect demonstration of why I cringe any time I look at mass market paperbacks in a used bookstore.

3. Like a lot of (white?) folks, I mostly know Sister Souljah from Bill Clinton's opportunistic use of her in his 1992 campaign. Her Wikipedia entry notes that The Coldest Winter Ever was her first novel and that it was praised by the New Yorker; the book's Amazon page, however, features celebrity librarian Nancy Pearl saying that "although the novel's writing is amateurish, the message is sincere." Amazon also reveals that the book contains the following statistically improbably phrases: bad bitch, drug game, difference between writers, Long Island, Slick Kid, House of Success.

Given the countless novels set in New York, how many times does a writer have to use the phrase "Long Island" in order for it to be statistically improbable?

5. If, like me, you enjoy noting what people on the train around you are reading, you'd probably enjoy Seen Reading, a blog by a woman in Toronto who notes what people are reading around her, makes a guess of what page they're on, then, after going to the bookstore and reading that page, draws on what she finds there to write a bit of speculation about the person and their day. It's well worth your time.

6. A last note on the the topic of things thought on the L: as I sat on the L this morning, I was working through this post in my mind, thinking about how I would have to make sure to include the story of the odd conversation I had at the Printer's Row Book Fair yesterday:

After studying the books for sale at my employer's booth for a bit, a woman said to me, "Why don't you have any good books?"

To which I, reasonably, replied, "We do--all of these books are good." For emphasis, I accompanied my confident statement with a sweeping gesture that encompassed the dozens of books on offer in front of me; we had, after all, only brought good books.

"No," said the woman, emphatically. "I mean good books--ones that are written by Sports Illustrated!"

To which I had no response.

But as I sat on the L thinking about how bizarre this exchange had been, it slowly dawned on me that it had never happened: I had simply dreamed the whole thing.

Which does, however, give me a good excuse to point you to the Annandale Dream Gazette, a virtual dream aggregator that should be in the Google reader of all dream fans.

7. From dream to nightmare: remember learning about Valley Forge in grade school? What I've learned this week from John Ferling's compulsively readable Almost a Miracle: The American Victory in the War of Independence (2007) is that Valley Forge was far worse than we were probably taught. Due to a variety of failings on the parts of the nascent Congress and the poorly (and, to be fair, hastily) organized Army, along with some plain old bad luck, the Continental Army ran out of most supplies almost the instant they made winter camp at Valley Forge. Ferling's description of the conditions for the enlisted men rival the horrors faced by Napoleon's army as it fled Moscow, so vividly and terrifyingly described by Adam Zamoyski in Moscow 1812 (2004). Ferling puts Washington's army's suffering in perspective:

Upward of 2,500 of Washington's men perished that winter, very nearly one man in seven of the Continentals that were with him late in December. (In contrast, about one American in thirty who were involved in operations in the Battle of the Bulge died in battle).

Incredibly, [Prime Minister] North's government had led Britain into a faraway war without a plan for waging it. All along it had presumed that the Americans would back down when faced with British force. The government also believed that if the rebels were so foolish as to resist, their army could not possibly be a match for regulars. It, and the rebellion, would be crushed in short order.

Okay, fellow contemporary Americans: any of that sound frustratingly familiar?

There's also another reason the Revolutionary War is important to remember right now: the American military's longstanding tradition of treating prisoners with justice was originated by George Washington's army, who understood the necessity of treating one's vanquished foes with humanity and dignity. The Bush administration's repudiation of that heritage is one of the blackest stains on its reprehensible record.

9. One of the strengths of Almost a Miracle is Ferling's eye for the odd story or detail that makes this long-ago conflict come alive--makes it become human again, even when it's horrifying. Here, he tells of a foraging operation in the Valley Forge winter where a conscript, John McCasland, and fifteen comrades

were sent on a patrol to search out Hessians who were suspected of being in the area. They found them occupying "a large and handsome mansion house," and discovered, too, that the Germans had posted only a single "large Hessian" outside as a sentinel. The guard had to be disposed of before the others could be taken, but no one wanted "to shoot a man down in cold blood." After some debate, those who were thought to be the best shots drew lots to determine whose job it would be to take out the sentry. McCasland won (or perhaps lost) the draw. While he readied himself, the others surrounded the house. Finally set, McCasland decided that he would not shoot to kill, but instead fire "to break his thigh. I shot the rifle and aimed at his hip," he remembered. The shot struck a tobacco box in the soldier's pants pocket, ricocheted and entered his leg "and scaled the bone of the thigh to the outside." Hearing the shot, the other Hessians immediately decided that they were heavily outnumbered and must surrender. As none spoke English, one "came out of the cellar with a large bottle of rum and advanced with it at arm's length as a flag of truce." The sixteen Americans took twelve Germans prisoner "and delivered them up to General Washington."