Keeping up the fight, or more notes on organizing books

1 Soon after my post last week on the fight against entropy, Ed at the Dizzies, inspired by Jenny at bookshelves of doom, threw down a challenge: tell a coherent story through the titles on a stack of books. The best entry I've seen remains this one from artist Nina Katchadourian, who originated the whole concept, which she calls the Sorted Book Project: 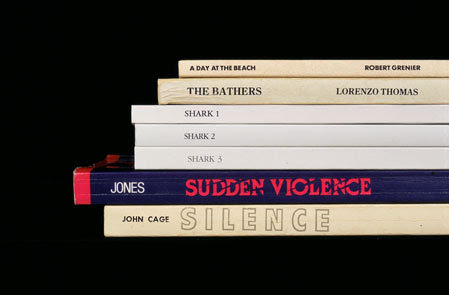 You can see more of Katchadourian's Sorted Books, as well as other works, at her site. Ed has collected a half dozen or so entries for his contest this week, which you can see at the Dizzies. 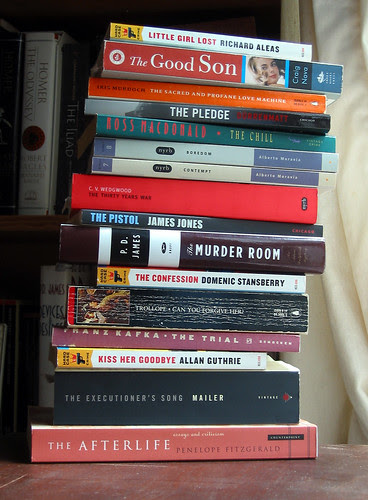 In case you can't see the books, they are:

Little Girl Lost, by Richard Aleas; The Good Son, by Craig Nova; The Sacred and Profane Love Machine, by Iris Murdoch; The Pledge, by Friedrich Durrenmatt; The Chill, by Ross Macdonald; Boredom and Contempt by Alberto Moravia; The Thirty Years War, by C. V. Wedgwood; The Pistol, by James Jones; The Murder Room, by P. D. James; The Confession, by Domenic Stansberry; Can You Forgive Her?, by Anthony Trollope; The Trial, by Franz Kafka; Kiss Her Goodbye, by Allan Guthrie; The Executioner's Song, by Norman Mailer; and The Afterlife, by Penelope Fitzgerald

2 I thought of another possible organizational system that I didn't touch on the other day: books could be arranged by country. I fear, however, that my collection would replicate nearly all the inaccuracies of the Mercator Projection--though in at least one area I'd do better than Mercator: my utter lack of books by Greenlanders would mean that it would finally appear smaller than Africa. Iceland, on the other hand . . .

3 Speaking of photos of books, Stacey's photo of our Wodehouse books got picked up by The Winged Elephant, the Overlook Pres blog. Because I'm a fan of a couple of Overlook authors, I keep their blog in my reader, and when I opened that post I thought, "Weird. That looks like Stacey's photo." Their headline?

Look How Nice Our Books Look on Your Bookshelves?

Overlook's Wodehouse hardcovers are beautifully designed and produced, so I'm glad we got to help out their marketing staff by providing an example. There are few better gifts than the gift of Wodehouse, and there's no better Wodehouse than the Overlook editions.
Posted by Levi Stahl at 9:22 PM